Home » Americas » On Mexico’s Border With U.S.,Desperation as Migrant Traffic Piles Up

Migrants being allowed to enter the United States from Chihuahua last week.Credit…Daniel Berehulak for The New York Times

Mexico is struggling to deal with a new wave of migrants expelled from the U.S. while even more come north hoping to cross. Shelters that were empty four months ago are now having to turn many away.

CIUDAD JUÁREZ, Mexico — The migrants’ hopes have been drummed up by human smugglers who promise that President Biden’s administration will welcome them.

Instead, the United States is expelling them back to Mexico, where they wait along with tens of thousands of others hoping to cross. The pressure, and desperation, is quickly building among families stuck in Mexico, as shelters and officials struggle to help them.

In the United States, the federal authorities are scrambling to manage a sharp increase in children who are crossing the border on their own and then being held in detention facilities, often longer than permitted by law. And the twinned crises on both sides of the border show no sign of abating.

Near the crossing with El Paso, Texas, a group of mothers and fathers clutching their children were sobbing as they walked back into Mexico from the United States on Saturday. They walked unsteadily, in sneakers too loose after their shoelaces were confiscated and discarded along with all their other personal items when they were detained by the United States Customs and Border Protection.

From his office in Ciudad Juárez, Enrique Valenzuela sprang from his chair, leaving a meeting to run to the bridge to meet the families after his daughter, Elena, 13, spotted them coming. 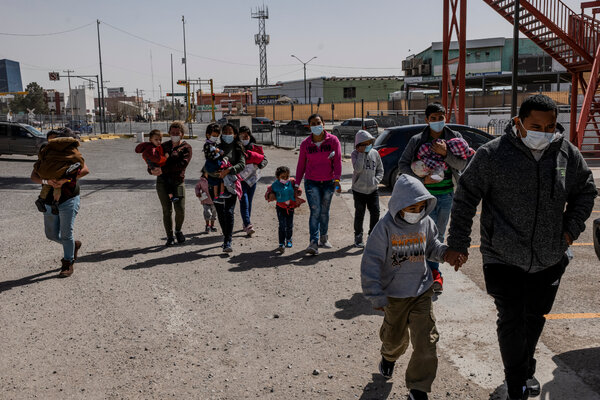 Mr. Valenzuela, a coordinator for the Mexican government’s migration efforts in Chihuahua State, knew that if he couldn’t get to them to offer help, organized crime networks who prey on migrants’ desperation to extort or kidnap them for ransom probably would.

The migrants — nine adults and 10 children — wiped their tears as Mr. Valenzuela drew near. The moment was one of several such scenes of despair and confusion witnessed by New York Times journalists at the border over three days.

“The border is closed,” Mr. Valenzuela said. “Come with me, I will help.” He led the group to his office near the rusty border wall that separates El Paso from Ciudad Juárez, topped with miles of new concertina wire installed in the final weeks of President Donald J. Trump’s administration, officials said.

Jenny Contreras, a 19-year-old Guatemalan mother of a 3-year-old girl, collapsed in a seat as Mr. Valenzuela handed out hand sanitizer.