A 29-year-old man was fatally injured Thursday evening when a car collided with his scooter and then crashed into an outdoor dining structure on a busy block of Astoria, Queens, the police said.

The man on the scooter, whose name was not released, was taken to Mount Sinai Queens and pronounced dead, the police said.

Investigators were trying to determine what led to the crash. The police said the episode unfolded shortly before 8 p.m., when the driver of the vehicle, a 2013 Mercedes-Benz, was traveling north on 35th Street by Ditmars Boulevard, and tried to pass a slow-moving car by driving into a bicycle lane.

The Mercedes struck two parked cars before colliding with the 29-year-old man, who was on a Yamaha scooter, and then crashing into the outdoor dining structure, the police said.

One witness told a reporter at the scene that the driver of the vehicle was traveling “well over 50 miles per hour” before crashing into the dining area. 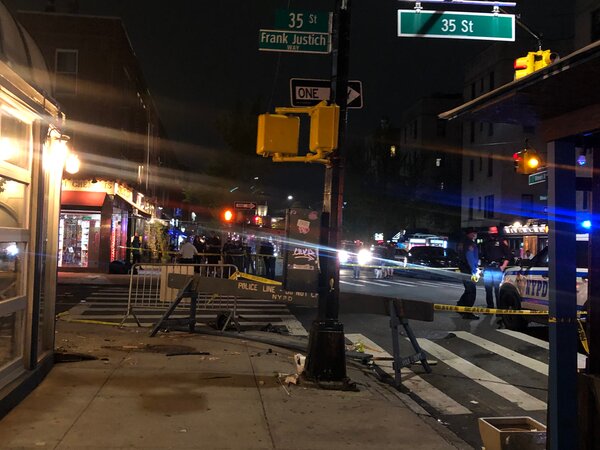 The crash occurred in a commercial section of the neighborhood known for its sidewalk cafes and restaurants. Kevin Sales, general manager of the restaurant where the crash occurred, Rosatoro, said a tree and an electrical pole near their dining structure probably slowed the vehicle down. “Or else she would have been inside the restaurant,” Mr. Sales said of the driver.

Mr. Sales said surveillance camera video showed the car plowing into the enclosure, and airborne debris striking a woman sitting with her dog at an open-air, curb-facing table just inside the restaurant.

Video circulating on social media showed a dark-colored car lodged inside a wooden structure. Hundreds of people stood behind yellow police tape as investigators examined the site. Rosatoro is one of three corner restaurants facing the intersection, which was blocked to traffic in every direction on Thursday night. “If it had been a Friday or Saturday night there would have been a lot more out,” said Shane Chrystal, owner of River Crest restaurant, across the street from Rosatoro.

Mr. Chrystal said he was inside when he heard what sounded like an explosion. Yohvanni Kathriner, who lives across the street, filmed the chaotic aftermath from his second-story roof and shared cellphone video that showed firefighters lifting a man out of the enclosure and administering CPR.

Mr. Sales said the restaurant would have to rebuild the outdoor dining enclosure — which it had completed just days earlier — and replace all of its tables and chairs at a likely cost of $20,000. “I don’t know if insurance will cover it,” he said. “We’re going to find out.”

The crash happened at a time when officials have begun loosening pandemic restrictions that limit hours of operation and capacity at bars and restaurants.

Outdoor dining structures, which became popular during the pandemic, have been struck by vehicles several times in recent months.

In August, a woman having lunch at a restaurant on Franklin Street in Greenpoint, Brooklyn, was injured when a car struck a barricade that slid into the woman. The driver drove off. The episode followed an accident three days earlier in which two vehicles collided on Second Avenue near 92nd Street on the Upper East Side and one of them careered into an outdoor seating area that was closed at the time. The driver and two people at the scene were treated for minor injuries.

In December, a driver lost control of a car that slammed into outdoor seating at a restaurant on Bailey Avenue in the Bronx. The restaurant was closed at the time. The police said the driver had lost consciousness.

Trudeau defends Scheer lawsuit threat, says consequences for those who ‘twist the truth’