Weather: A sunny day ahead with a high in the mid-60s. It should be equally clear tonight, with the temperature dropping to the mid-40s. 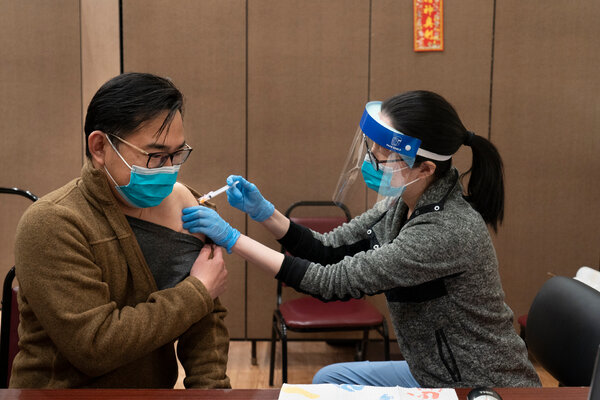 One in three New York State residents has received at least one dose of a Covid-19 vaccine, Gov. Andrew M. Cuomo said on Sunday, marking another milestone in the drive to end the pandemic.

The rate is largely consistent with vaccinations nationwide — 32 percent of Americans have received at least one dose, according to the Centers for Disease Control and Prevention. But the pace has so far not been fast enough to contain the spread of contagious virus variants.

This week, every New Yorker age 16 and older will be able to get vaccinated, making vaccines available to thousands more. But worries about the spread of variants persist.

[Variants carrying mutations that make the coronavirus both more contagious and in some cases more deadly are spreading, prolonging the pandemic.]

Mr. Cuomo said on Sunday that more than 10,360,000 doses had been administered in New York State. But even as the number and pace of vaccinations increase, the pandemic in New York has not meaningfully abated.