Angry response from Pakistan follows US president’s accusation of ‘deception’ and threat to cut foreign aid. 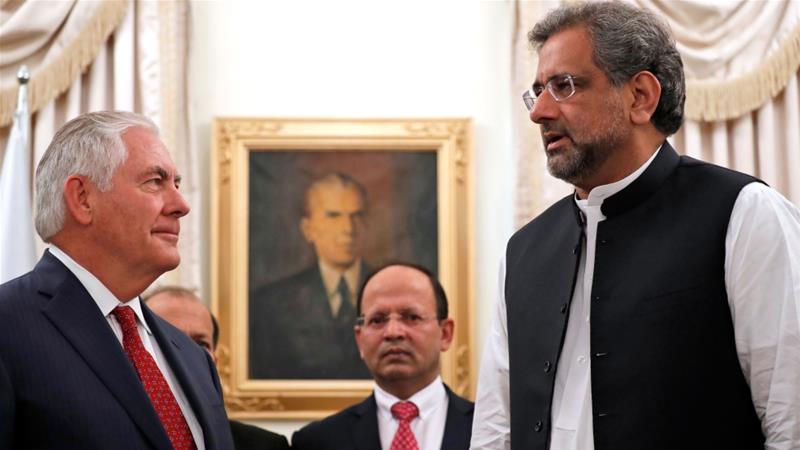 Pakistan has hit back after accusations of deception and providing a safe haven for “terrorists”, levelled by US President Donald Trump via Twitter.

In his first tweet of the year on Monday, Trump threatened to cut aid to Pakistan for allegedly lying to the US and offering “little help” in hunting “terrorists” in Afghanistan.

“The United States has foolishly given Pakistan more than $33 billion in aid over the last 15 years, and they have given us nothing but lies and deceit, thinking of our leaders as fools,” Trump said.

“They give safe haven to the terrorists we hunt in Afghanistan, with little help. No more!”

In response, Shahid Khaqan Abbasi, Pakistan’s prime minister, called a meeting of the National Security Committee (NSC), comprising the army chief, naval and air heads, intelligence chiefs and other ministers, on Tuesday to discuss the future course of action.

Following the meeting, the NSC expressed its “deep disappointment” over Trump’s comments.

It said in a statement that recent remarks by the US leadership “were completely incomprehensible as they contradicted facts manifestly, struck with great insensitivity at the trust between two nations built over generations, and negated the decades of sacrifices made by the Pakistani nation”.

The NRC’s response came after Khawaja Asif, Pakistan’s foreign minister, said Trump was trying to blame Pakistan for the US’ failure to win the war in Afghanistan.

“Trump is disappointed at the US defeat in Afghanistan and that is the only reason he is flinging accusations at Pakistan,” Asif told the Pakistani TV network Geo on Monday.

“We have already told the US that we will not do more, so Trump’s ‘no more’ does not hold any importance.”

He said “Pakistan is ready to publicly provide every detail of the US aid that it has received.”

Pakistan’s foreign office summoned the US ambassador in Islamabad on Monday and lodged its protest against Trump’s tweet.

Richard Snelsire, US embassy spokesperson, confirmed to Al Jazeera that David Hale was called upon by the foreign office.

Sons of Stephon Clark, Who Was Killed by Police, Will Receive $2.4 Million Settlement