Pamela Kraft mingled among stars like Lou Reed and Patti Smith at the storied nightclub Max’s Kansas City, but she was not a musician. She championed the rights of Indigenous peoples with the United Nations, but had no background in policy. She worked with artists in the Fluxus art movement, but was not, by trade, a painter or a sculptor.

Perhaps she did not need to be.

“Pam was a true artist, and her work was her canvas,” said Diane Williams, a friend and colleague at Tribal Link Foundation, a New York-based nonprofit organization dedicated to empowering Indigenous Peoples that Ms. Kraft founded in 1992.

Ms. Kraft died on March 14 in North Bergen, N.J. after a heart attack, according to a friend, James Merewether. She was 77.

Hers was a life in two parts: a bohemian fantasy made real in the art scene of New York in the 1960s, followed by a detour into her own brand of globetrotting activism, tinged with the spiritual and philosophical.

Ms. Kraft once described Tribal Link as “a socially engaged sustainability mission” that she considered a “metamorphosis and expansion of my shamanic social practice in the shape of an actual nonprofit.”

As the founder of Tribal Link, she collaborated with the United Nations on issues affecting Indigenous peoples. She helped create education programs for Maasai girls in Kenya, organized panels to help Indigenous cultures fuse entrepreneurship with biodiversity, and sponsored lectures and concerts by leading Indigenous leaders, writers, and musicians.

One colleague, Damon Gerard Corrie, described her as a “Fairy Godmother” for her lobbying efforts to free dissident journalists and activists from Indigenous communities who were imprisoned for protesting government policies. 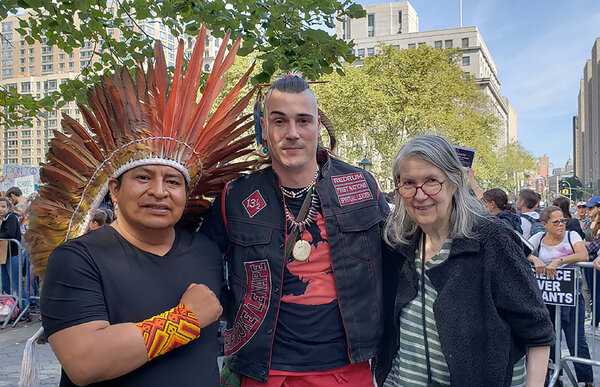 Ms. Kraft also oversaw the creation of Tribal Link’s flagship program, Project Access, developed in collaboration with United Nations agencies, which trained Indigenous Peoples to advocate for themselves on the world stage on matters affecting their human rights, lands and resources, cultures, and livelihoods.

In 2012, the NGO Committee on Spirituality, Values and Global Concerns recognized her efforts, awarding her its “Spirit of the U.N.” award.

Influenced by the shamanic teachings of Carlos Castaneda and others, her activism could veer toward the mystical, which somehow seemed appropriate, given Ms. Kraft’s interests in all things magical and colorful growing up.

Pamela Ann Kraft was born on Oct. 31, 1943, in Dover, N.J., to William Kraft, an Army veteran who worked at Picatinny Arsenal in Wharton, N.J., and Ida Kraft, a homemaker. As a child, Pamela loved making art and taking flights of fancy — she used to say that she believed her mother and aunts had been witches in a previous life.

Her creative interests led her to study fine art at Douglass College, a women’s college affiliated with Rutgers University, where she received a bachelor’s degree in fine art in 1965.

At Douglass, Ms. Kraft became a friend and muse to the artist Robert Watts, a professor there who introduced her to Fluxus, the international anti-art movement that balanced a revolutionary ethos with a spirit of cheeky fun and that attracted such artists as George Brecht, Nam June Paik, and Yoko Ono. Ms. Kraft appeared in multiple film and photography projects by Mr. Watts, including “89 Movies (Unfinished)” (1965), which was shown at the Museum of Modern Art in 1970.

Before long, Ms. Kraft made her way to New York City, settling in a spacious loft on West 28th Street in Manhattan’s flower district and working as a waitress at Max’s, a star-studded nexus of the city’s rock and art scenes.

“That first time I walked into Max’s it was like a strange dream of the most wonderful people that you loved in the art world all sitting in the same restaurant,” Ms. Kraft was quoted saying in the 1998 book “High on Rebellion: Inside the Underground at Max’s Kansas City,” by Yvonne Sewall-Ruskin. “It was a dream come to life. You had a sense of the absurd given to you in material form.”

Her loft, too, became a magnet of sorts for the creative set. Despite the fact that she did not know how to cook, she and a friend, Karen Chaplin, started an immersive salon and underground restaurant called Silky Valentine — a “mini-Max’s,” she said — which drew the likes of Debbie Harry, Lily Tomlin and Gregg Allman, along with many artists.

While she had little ambition to pursue an art career herself, she collaborated with the artist, writer and composer Jacki Apple on a performance art project called “Transfer,” exploring feminism and identity, which they presented at Apple Gallery in Chelsea in 1971.

Eventually, however, Ms. Kraft’s horizons began to expand beyond the galleries and performance spaces of downtown Manhattan.

Her loft gatherings evolved from a supper club to a free-ranging salon for seekers of all stripes, and they continued for decades. Some nights would feature live jazz by the likes of Thomas Chapin or Su Terry; others would involve working groups studying the self-enlightenment philosophies of G.I. Gurdjieff known as the Fourth Way.

“There was a quality of emergent spirit, of transcendence that pervaded the events,” Mr. Merewether, a companion who lived with Ms. Kraft for many years, wrote in an email. “It was never totally about the music, or the talk, or the story being told. It was ultimately always about evoking a sensibility that something had been shifted in the basement of oneself.”

Ms. Kraft traveled to Mexico on a spiritual quest of her own. There, a shaman told her that she represented the reincarnated spirit of an Egyptian who had died thousands of years before. The encounter inspired in her a fascination with Egypt, to which she later traveled, joining expeditions led by John Anthony West, an Egyptologist known for his research on the Sphinx.

Her hunger for knowledge and experience steered her to the United Nations’ Earth Summit in Rio de Janeiro in 1992, which set her on a new course as an activist.

Attending a conference of Indigenous peoples held shortly before the summit, Ms. Kraft was struck by the sense of community she experienced there, as well as the “aesthetic beauty of music, dress, and body painting,” Mr. Merewether wrote.

“She found something that for her went far beyond art,” he added, “and she decided then and there to dedicate herself to advocating for Indigenous peoples everywhere.”

That mission continued for decades, until she fractured her hip in a fall in February at the TriBeCa loft she shared with Mr. Merewether. She suffered the heart attack while recovering from hip surgery. She was buried this week in the Hudson Valley, on land owned by the Schaghticoke First Nations, in a ceremony conducted by two tribal chiefs, one Schaghticoke and one Taino.

Ms. Kraft is survived by her brother, Dennis Kraft.

Following her death, friends and colleagues lauded her desire to channel her belief in magic and miracles for the greater good. As she liked to say: “One day you realize that no one in the world can heal you. Then you ask, ‘What can you give?’”

US space force is arming to jam Russian and Chinese satellites