Inexperienced adventurers have flooded remote areas like Wyoming’s Sublette County during the pandemic. When they call for help, the task is left to an overwhelmed network of volunteers.

PINEDALE, Wyo. — Kenna Tanner and her team can list the cases from memory: There was the woman who got tired and did not feel like finishing her hike; the campers, in shorts during a blizzard; the base jumper, misjudging his leap from a treacherous granite cliff face; the ill-equipped snowmobiler, buried up to his neck in an avalanche.

All of them were pulled by Ms. Tanner and the Tip Top Search and Rescue crew from the rugged Wind River mountain range in the last year, in this sprawling, remote pocket of western Wyoming. And all of them, their rescuers said, were wildly unprepared for the brutal backcountry in which they were traveling.

In the throes of a pandemic that has made the indoors inherently dangerous, tens of thousands more Americans than usual have flocked outdoors, fleeing crowded cities for national parks and the public lands around them. But as these hordes of inexperienced adventurers explore the treacherous terrain of the backcountry, many inevitably call for help. It has strained the patchwork, volunteer-based search-and-rescue system in America’s West. 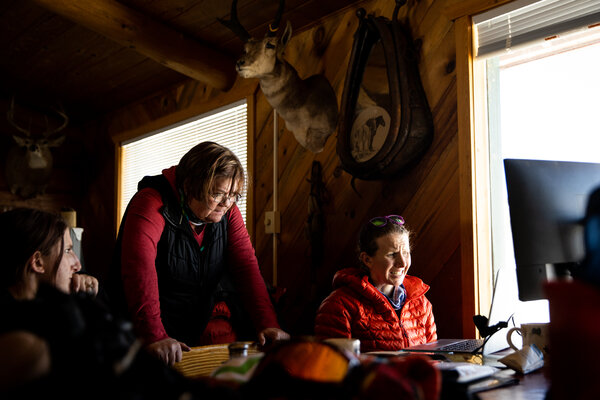 Such operations within the parks are handled by the National Park Service. Outside those boundaries, search-and-rescue missions fall to volunteer groups like Tip Top, which since 1980 has policed the harrowing Wind River mountain range, about an hour southeast of Jackson. After decades as a well-kept wilderness secret, reserved for only the most experienced outdoor enthusiasts, a pandemic-era mainstream has now discovered this rugged stretch of Wyoming.

“They come here and they’re like, ‘It’s beautiful, it’s a big open space.’ And it is,” Lesta Erickson, a Tip Top volunteer, said. “But it’s also dangerous.”

‘A Target toy aisle in December’

Slicing southeast across the Continental Divide, the Winds — as the range is known, locally — are the Grand Tetons’ more remote, inaccessible sister. Where the infrastructure of Jackson and the national park offer direct, if difficult, routes to access those mountains, much of the Wind River Range is at least a daylong hike away from the nearest entry points, mostly through the Bridger-Teton National Forest.

“It’s the last of its kind,” Conor Raney said of the range. Mr. Raney, a native of Sublette County, spends his summers picking up trash in the Winds, which he says is one of the few places left in Wyoming that allows for solitude.

Coronavirus: City of Kingston closes parks, playgrounds to flatten the curve of COVID-19

How the Wealthy Are Maneuvering to Get the Vaccine First

Parkland Students Bask in Pulitzer Mention: ‘They Took Us Seriously’