Home » Americas » Pantyhose and Trash Bags: How Music Programs Are Surviving in the Pandemic

And neither expected to watch their marching band at New Mexico State University play through cloth face masks, separated by six-foot loops of water pipe, with bags filled with hand sanitizer and disinfectant strapped around their waists.

But this is band practice in a pandemic.

The two students, both seniors, are grateful to have practice at all. In March, the coronavirus shut down their band along with much of the country, painfully demonstrating that the pandemic would leave no part of their education untouched. It would take five months for them to regain the precious ability to play together again.

“In the middle of this summer, I started playing my instrument alone and sat there crying because I was just so upset,” Ms. Alvarez, 22, said. “Making music with other people is part of why I do it.”

In dozens of interviews, students and educators described similar travails — and similar adaptations — in music programs across the country. In many districts, schools have paused their music programs or moved them online out of concerns that aerosol transmission of the coronavirus during band or chorus practices would turn them into superspreader events.

Those bands and orchestras that have moved their programs online often found that ordinary video chat platforms are inadequate because of audio lag. And students have said there is simply no substitute for in-person practices, performances and instruction. Even in small group or private lesson via webcam, the details of proper posture, pitch and rhythm are lost, they said. 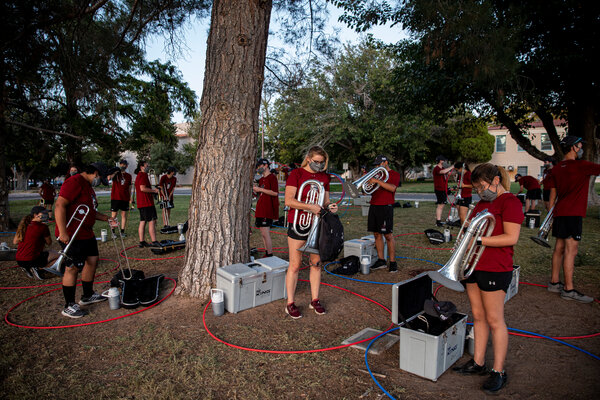 Ms. Alvarez, who is studying music performance, lost the one-on-one guidance she needed to prepare for auditions with professional orchestras. Mr. Vigil’s first student teaching position, critical for the degree in music education he is seeking, was canceled. Rather than risk entering a job market ravaged by the virus, both chose to postpone graduation.

Unable to introduce music to children during their formative years, teachers fear a lasting drop in participation that could wipe out much of the next generation of musicians.

“If children and even college students can’t participate in music, it’s going to create such a void and it’s going to reverberate for a long time,” said Mark J. Spede, president of the College Band Directors National Association.

Instead of ensemble music, some programs have been teaching music history or theory, or having students submit videos of themselves playing their instruments that are incorporated into collages that make it seem as if they are performing together. But creating such collages requires resources that many schools cannot afford.

At North Kansas City High School in Missouri, where the governor has slashed the education budget, the band director Carrie Epperson has only half of last year’s funds, and she is still waiting on bell covers her school district promised to send to wind instrumentalists. Nevertheless, mask wearing and strict social distancing seem to have worked: no band members have tested positive for the coronavirus.

Brenna Ohrmundt is the band director for a small, low-income district in rural Wisconsin, where coronavirus cases have skyrocketed in recent weeks. When schools shuttered in March, many students did not have instruments at home. When they returned to classrooms this fall, they still were not allowed to play together.

“What I’m afraid of is, students are going to say, ‘This is not what I signed up for,’” Ms. Ohrmundt said.

Yet, at a time when students could be discouraged from continuing to study music, educators are finding innovative ways for them to play together safely.

Mr. Spede, who is also director of bands at Clemson University, recognized early on that educators did not know which music activities might be safe. He initiated a study in which researchers at the University of Colorado and the University of Maryland have been measuring the spread of aerosols when people sing, dance or play instruments.

“My biggest fear was that people, administrators, whoever were going to have a knee-jerk reaction and say that can’t possibly be safe, to play music in person,” Mr. Spede said. “What we’re trying to do with the study is, literally, save music.” 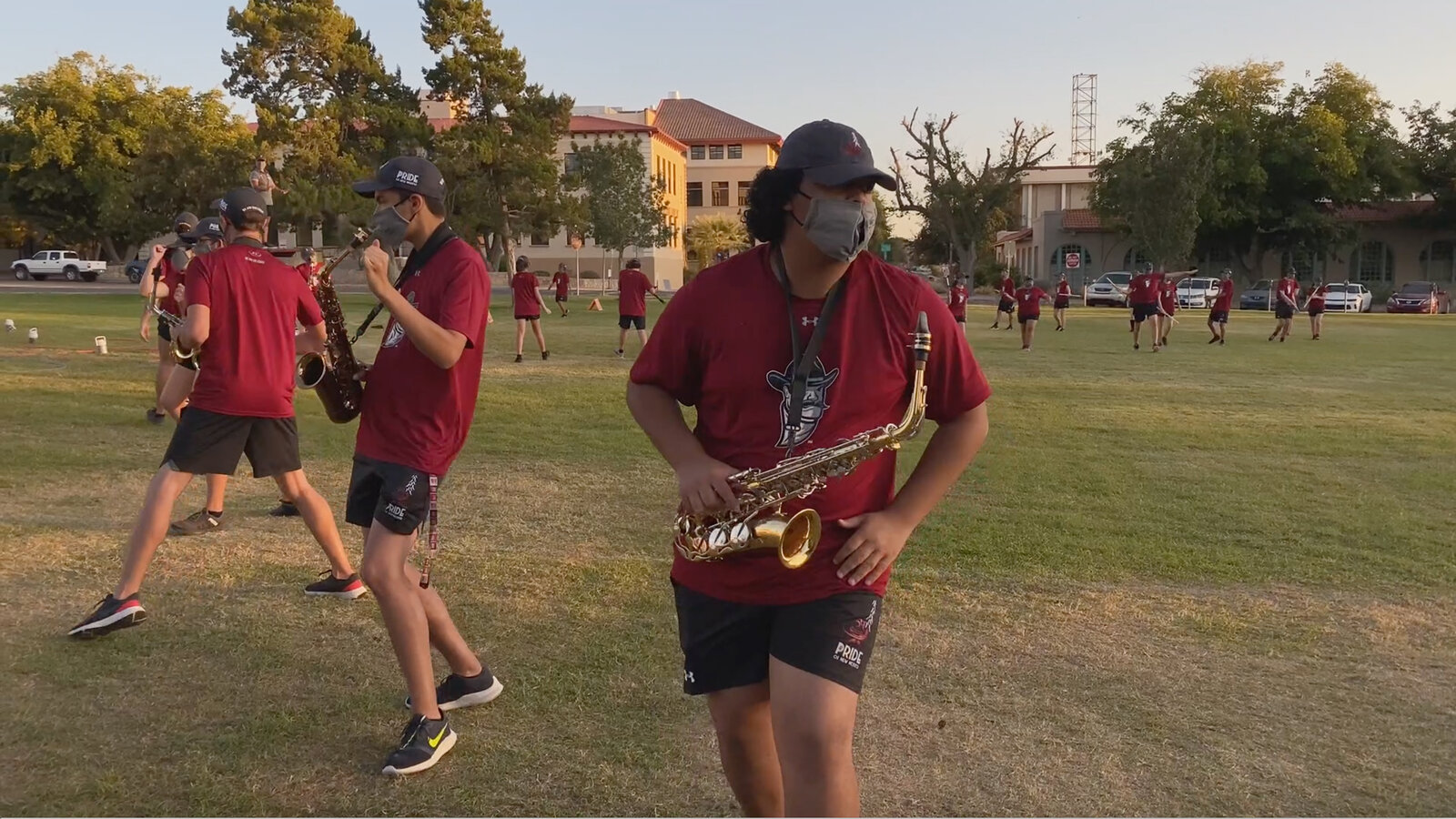 Preliminary results from the study show that some simple rules can help prevent the virus from spreading in music groups: mask wearing, even if that entails cutting a hole in it to play an instrument; covering the bell of brass instruments, such as trumpets, with nylon (pantyhose work); and practicing outdoors where possible, or in properly ventilated areas.

“Even that information gives people hope right now, which we desperately need,” said Rebecca Phillips, president of the National Band Association and the director of bands at Colorado State University.

Ms. Alvarez cried tears of joy and relief on the day in August when New Mexico State’s marching band reunited.

Steven Smyth, the university’s associate director of bands, worked all summer with faculty and students to put into place safety measures. Practice is now always outdoors. To enforce social distancing, Mr. Smyth designed six-foot “hula hoops” made of water pipes that encircle each musician. He recruited a flute player who is studying engineering to customize masks with slits that snap shut magnetically for the woodwind players.

Nylon bell covers were ordered for brass players. And, following another recommendation from the study, brass players must empty “spit valves,” a tap that drains condensation from inside the instrument, onto absorptive puppy pee pads.

“There was a lot of negativity going around,” Ms. Alvarez said. “But once those masks came out, a lot of people started saying, ‘Oh, we’re coming back. This is happening.’”

Mr. Smyth said this week that the marching band had not had a student test positive for the coronavirus. Nationally, the College Band Directors National Association reports that no infections among college band students have been attributed to band activities, Mr. Spede said.

“I feel a little bit safer just knowing that there are a lot of people fighting to keep the arts alive,” Mr. Vigil said.