Penelope Laingen didn’t know she would start a national movement when she tied a yellow ribbon around the white oak in her front yard in Bethesda, Md. It was November 1979, and her husband, L. Bruce Laingen, was the highest-ranking official among the 52 people held hostage in Iran after student militants overran the American Embassy.

The idea, she told a reporter for The Washington Post, came to her suddenly, inspired by the 1973 hit song by Tony Orlando and Dawn, “Tie a Yellow Ribbon ’Round the Ole Oak Tree,” about a prison inmate who asks his darling to drape a yellow sash around a tree so that when he comes home he’ll know she still loves him.

“One of these days, Bruce is going to untie that yellow ribbon,” she told the reporter. “It’s going to be there until he does.”

The Iran hostage crisis lasted 444 days, contributed to President Jimmy Carter’s loss to Ronald Reagan in 1980 and led to the deaths of eight commandos during a botched rescue mission. It came at the dawn of the 24-hour news cycle and captivated Americans outraged at the Iranians, unsure of their leaders and looking for something, anything, to rally around.

Mrs. Laingen gave it to them. Within weeks, yellow ribbons were everywhere. An 800-foot sash encircled the National Geographic headquarters in Washington. Girl Scouts wore them on their uniforms. The Carters invited Mrs. Laingen to tie a ribbon around a Georgia maple on the White House grounds.

“Tony Orlando could not have dreamed how far this yellow ribbon business would go,” another Washington Post reporter wrote. 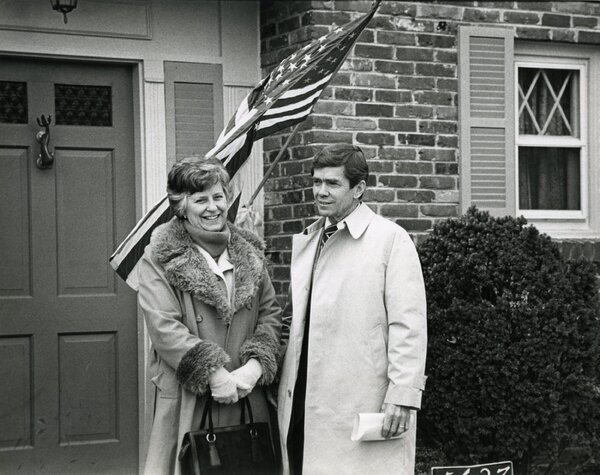 Mrs. Laingen died on April 3 at the home of her son James in Marshall, Va. She was 89 and had had breast cancer, said another son, Charles.

Yellow ribbons were not the only thing Mrs. Laingen contributed during the hostage crisis. After decades spent following her husband from post to post, she found a new purpose in organizing. In March 1980, she and a few other “hostage wives” founded the Family Liaison Action Group, both to support one another and to put pressure on the State Department, which many felt was not doing enough to free their loved ones.

While Mrs. Laingen, who was known as Penne, never claimed to be the leader of the hostage families, she was held up as their spokeswoman by the news media, a role she filled with the sort of practiced grace that comes from years hosting diplomats as her husband’s unofficial social secretary. She edited her group’s monthly newsletter, met frequently with the Carters and became a regular voice in newspaper coverage.

In December 1980, she was hoisted 60 feet in the air atop a crane in order to place a star on the national Christmas tree — decorated with 52 yellow ribbons — on the Ellipse in Washington. She then had to wait in the bracing winter wind as photographers went up on another crane, one by one, to take her picture.

“I don’t even like to go up in airplanes,” she told the press.

The hostages were released on Jan. 20, 1981, the day of Mr. Reagan’s inauguration. Word that their plane had departed Tehran came during that ceremony outside the Capitol, where Mrs. Laingen watched from a reserved seat.

A few days later, Mr. Laingen arrived at their home in Bethesda, greeted by hundreds of onlookers. As a junior high jazz band played “Tie a Yellow Ribbon,” he tore the now-tattered sash off the oak tree.

The Laingens put a ribbon back up during the 1980s Beirut hostage crisis, and again during the 1991 Gulf War, in which two of their sons served. Later that year they donated the original ribbon to the American Folklife Center at the Library of Congress.

“I am pleased to present to your attic from my attic the mother of all ribbons,” Mr. Laingen said.

They sold the house in 2013, but when they learned that the buyers were going to level the lot, they added a stipulation: The oak tree stays. It remains there, with a small ceramic yellow ribbon attached to its trunk.

Penelope Lippitt Babcock was born on Dec. 1, 1931, in Ann Arbor, Mich., to Frederick and Margaret (Shippen) Babcock. She grew up in Washington, where her father worked for the Federal Housing Administration. Her mother was a homemaker.

After graduating from the George Washington University in 1953, she worked for the Federal Bureau of Investigation, starting as a typist and rising to research analyst. She met Mr. Laingen, a Foreign Service officer, on a blind date. He had been back in Washington after tours in Europe and the Middle East. They married in 1957.

Mrs. Laingen immersed herself in the role of the Foreign Service spouse, even though she chaffed at the restrictions it placed on her own ambitions. Mr. Laingen was sent to Pakistan and Afghanistan and later served as the ambassador to Malta. Every rung of the career ladder he climbed put added responsibility on Mrs. Laingen.

In Karachi, Pakistan, she juggled sick children, oppressive heat and intermittent electricity to organize a dinner for Jacqueline Kennedy’s social secretary; in Kabul, Afghanistan, she organized a bazaar on the embassy grounds, where staff members could buy crafts from local artisans.

It was still a time when much of the world looked to America as a moral beacon, with its diplomats and their families as its representatives. And like many people in the United States, she was astonished at the anti-American rage on display in Iran in the late 1970s.

“It’s a very bitter pill for me to see the demonstrations,” she told The Washington Post. “Bruce and I have spent our lives trying to project a good neighbor image for America. And to come back from that and suddenly be called ugly American, and all this talk about Bruce being prosecuted for espionage, it really hurts.”

After his ordeal in Tehran, Mr. Laingen could have had practically any post he wished for, but in deference to his family he decided to remain stateside, becoming vice president of the National Defense University until his retirement from the Foreign Service in 1987.

With her children grown and her husband ensconced in Washington, Mrs. Laingen had time to pursue her interests. She finished a long-percolating, though never published, novel. She painted, and she renovated her family’s vacation home in western Virginia.

Trump delivers State of the Union address amid protests