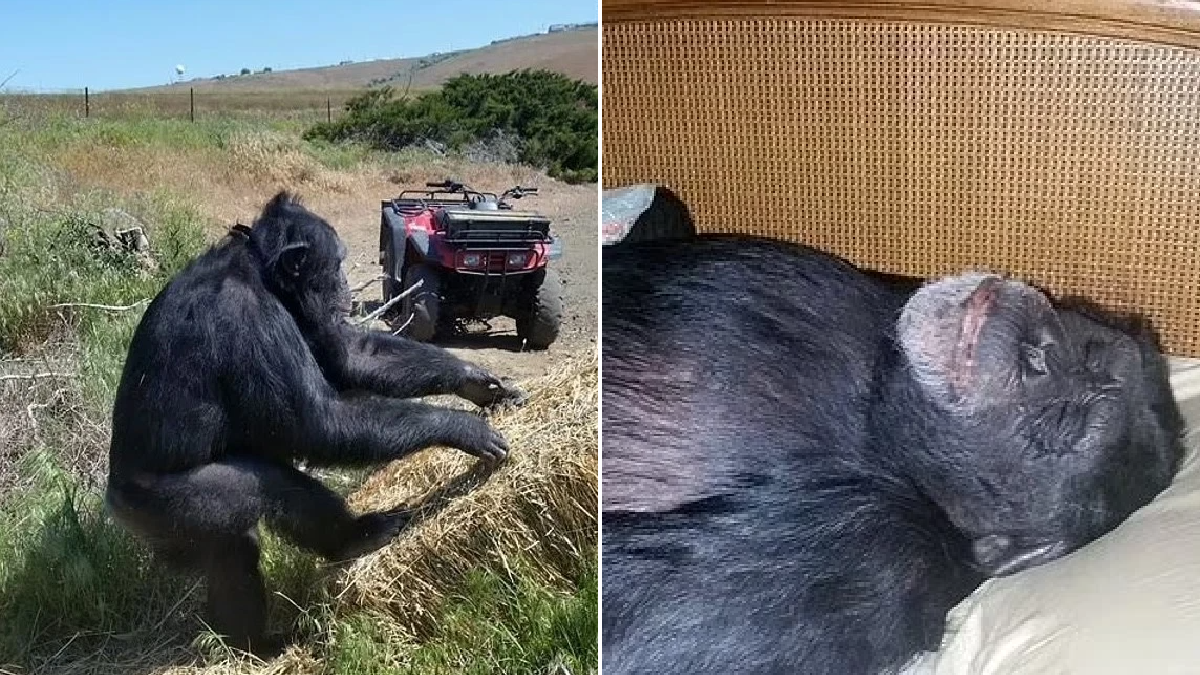 A chimpanzee that lived on a family ranch for 17 years was shot to death by police after it bit its owner’s daughter multiple times. The chimp named Buck attacked Tamara Brogoitti’s daughter on Sunday, prompting her to call 911.

‘It has attacked my 50-year-old daughter,’ Brogoitti said in the call to cops obtained by KHQ-TV. ‘She needs an ambulance. The ambulance can not get to her. I’ve locked myself in the basement with her. I can’t get out to get my own gun. She’s bleeding profusely. I’ve never seen anything like this.’

Buck bit Brogoitti’s daughter in her legs, arms and torso. Umatilla County Sheriff´s Office deputies who arrived at the scene found Buck roaming by a fence around the home in Pendleton, East Oregon. Sheriff’s deputies decided that the chimp would need to be ‘put down’ in order to help Brogoitti and her daughter.

Brogoitti then gave the deputies permission to shoot her chimp. The deputies hit Buck once in the head and he died immediately.

Oregon in 2010 made it illegal for residents to have great apes including chimpanzees as pets. However, the law let owners who had exotic animals before 2010 to keep them until they died, enabling Brogoitti to keep Buck.

Animal rights groups including PETA said Brogoitti cultivated a deadly situation by keeping Buck at her ranch for so many years.

‘PETA warned state authorities that Tamara Brogoitti had created a ticking time bomb by engaging in direct contact with a dangerous ape, and now, he is dead and a woman has been mauled because of Brogoitti’s refusal to follow experts’ advice and transfer Buck to an accredited sanctuary,’ Brittany Peet, the PETA Foundation’s deputy general counsel for captive animal law enforcement, told KXLY.com.

‘Since long before the chimpanzee Travis ripped a woman’s face off in 2009, it has been clear that attacks are inevitable so long as people continue to treat chimpanzees like Chihuahuas.’

Inside the Trump riots: How an ordinary Congress vote turned to chaos

Oxford graduate, 25, reveals she is engaged to her 71-year-old former professor