Home » Americas » Pigeon Guys Face Tough Times: ‘Who Has the Money? Who Has the Roof?’

On a cold, rainy evening in December, a terrified pigeon crash-landed onto a table in the outdoor seating area of a retro-themed bar in Ocean Hill, Brooklyn.

Circling overhead was a Cooper’s hawk that had accidentally dropped the bird and certainly wanted its dinner back. The bar owners kept the scene from turning gruesome by quickly covering the bloodied pigeon with napkins until the predator flew away.

The cocktail drinkers may have been startled, but the pigeon, which had spent most of its life in a coop on a rooftop across the street, would require care before it was able to fly again. Its owner patched the wound under its wing with Krazy Glue.

New Yorkers are rarely confronted so dramatically with the fact that thousands of pigeons are owned by a dwindling fraternity of their neighbors. Though keeping pigeons was once commonplace — it was cinematic shorthand for “working-class loner,” like Marlon Brando’s dockworker in “On the Waterfront” — the hobby is now almost prohibitively expensive in the city.

Urban bird keeping is practically a full-time job, owing to the emergence of new avian viruses that require regular vaccinations as well as scrutiny from a Buildings Department that demands coops be kept up to code. The rooftop has also become a coveted amenity in luxury apartment buildings, better served by deck furniture than a rickety assemblage of plywood and chicken wire. 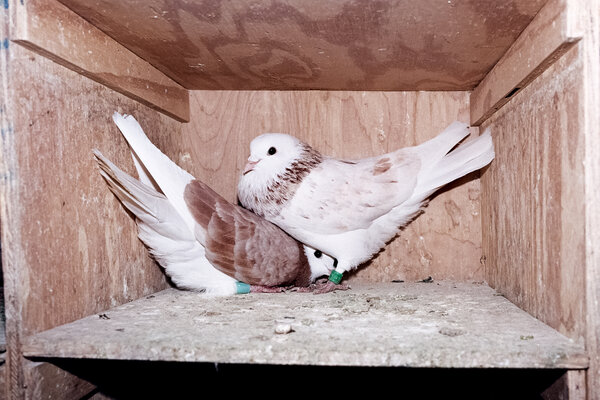 As Joey Scott, who keeps hundreds of pigeons atop a building on the border of Bed-Stuy and Bushwick, put it: “Who has the time, who has the money, and who has the roof?”

He’s one of the few who does. Mr. Scott grew up in Canarsie, where he was raised by a grandfather who kept hundreds of birds on his property. When the family needed to sell that house 20 years ago, he and his brother, Michael, suddenly had nowhere to keep the flocks they had inherited.

His brother eventually bought a rundown building on Bushwick Avenue for about $160,000, largely so they could store the birds on top of it; the pair also opened a store nearby called Pigeons on Broadway. The neighborhood’s real estate values increased steadily — and then drastically — over the following two decades. That first apartment building is now worth close to $1 million, and the pigeons have become a potential liability. They make a mess, and their food attracts mice. Who would want to live under all that?

The brothers also slowly started calibrating their pet store’s stock to cater to people who care for more than pigeons. Mr. Scott thinks that items pertaining to cats and dogs probably constitute the majority of their sales these days. They still sell pigeons, but increasingly the people who buy them don’t intend to keep them for long: a woman who buys them for religious rituals, a hunting club in Connecticut that uses them to train its dogs, still others who would rather not say what they’re using them for. The Scotts can’t be emotional about the transactions if they want to keep the lights on. “When we opened the store, we said keeping pigeons was an old man’s game,” Joey Scott said, “but we’re still here.”

There have been other adjustments in the ensuing years. Now in their 50s and both separated from their wives, the brothers live above the store in a sparse three-room apartment where they sleep on adjacent cots. The fact that they own the building outright means they don’t have to deal with landlords asking intrusive questions about the nearly 300 birds on the roof, though they still put in a ton of effort to make sure neighbors have no reason to complain to the Sanitation Department.

One early winter morning, Mr. Scott spent about two hours feeding the birds and hosing down their cages. If a hawk hadn’t been posted up nearby, he would have spent about the same amount of time letting them fly around. There are hundreds of varieties of pigeons, and the Scotts are partial to ones that have gold-flecked wingtips and that can soar so high they turn into barely perceptible specks in the sky. “These days kids need everything to be constantly exciting, like a video game,” he said. “But having them fly and come back to you? Forget it. I was sold.”

For Brooklynites like Mr. Scott, keeping pigeons is an intense daily physical routine of hauling water and bird feed up a ladder. And the birds generate a tremendous amount of waste, which has to be collected and disposed of. “It’s a lot of work,” said Mr. Scott, who paused for a smoke on the roof before heading to his day job in construction.

Though they may be part of a dying breed, the Scott brothers are not the only pigeon keepers in the neighborhood. They have a colleague — “nemesis” might be a better word — who has his coops just a few blocks away, though he is perhaps a world apart in terms of personality. This is the swaggering Dave Malone, who keeps several hundred birds on a rooftop he rents across the street from the retro bar where his injured pigeon landed.

Since Mr. Malone fell two stories off his roof last year and broke his back (as well as both legs), he mostly outsources the cleaning and feeding of his flock. He grew up nearby in Brownsville, he said, where his father let him keep 80 birds in the window cage of the one-bedroom apartment that he shared with 12 siblings. When his pets outgrew that space, it wasn’t a problem because he had access to whatever nearby abandoned structure he pleased. He remembers the free real estate as the sole benefit of living in such a bleak place, and credits it for keeping him from ever touching alcohol or drugs. “You could go in a hole in one building, keep walking and come out a block away,” he said of Brownsville in the 1970s. “But we could also build whatever we wanted, wherever we wanted.”

Those days ended in 2001, when a developer bought the building Mr. Malone had long used as a home base. But the former high school football player, who is in near-constant contact with the boxer Mike Tyson, his best friend and a noted pigeon enthusiast, has done extremely well for himself, operating a bodyguard company that caters to celebrities. He pays a man in Ocean Hill $300 a month in return for access to his roof. Mr. Malone and Mr. Tyson — they share the pigeons — also employ a team of people to take care of the birds when they can’t get around to it themselves. They’re mostly into rollers, which are pigeons bred to do cartwheels in the air.

Mr. Malone first got interested in pigeons as a child because his neighbors would use them as part of a war game that involved trying to coerce birds from different flocks to defect to their faction. He became hooked on both the strategy of the sport as well as the companionship of both the birds and the people who fly them. It’s challenging for him to comprehend that none of his 10 children feel similarly compelled.

Hoping to inspire someone to follow in his footsteps, Mr. Malone said that he had placed $5 million in an escrow account and was ready to pull the trigger on any structure large enough to accommodate a 32-foot-long coop and tall enough to give him a strategic vantage point over longstanding rivals like the Scott brothers and a guy down on Eastern Parkway who goes by the nickname Panama. But his options are somewhat limited. Not many people want to live next to — or underneath — hundreds of birds.

Because rooftops are the only space most city-dwellers have to keep their birds, it’s typical for die-hards to end up retiring on Long Island, where they can build coops in their yards. Suffolk County is now the nexus of an aging subculture’s social world and where its remaining members go to buy and sell pigeons.

On a recent Sunday, about 40 or so pigeon keepers were waiting for the auctioneer, a man they all call Paul Newman. Trash talk and cigarette smoke was free-flowing at this parking lot next to a cemetery in North Babylon, where they have gathered most weekends since 2002.

On the way out to Long Island, Mr. Malone passed Mr. Scott on the expressway, and he started swerving his S.U.V. in an attempt to startle him. He stuck his middle finger out the window as he passed his rival, muttering insults under his breath. It was unclear how much this was a joke.

Neither party acknowledged the other after everyone arrived safely. Instead they mingled with the dozens of others who wouldn’t consider spending their Sunday mornings anywhere else. While the venue may not be much to look at, everyone in the pigeon-keeping world seemed to be there.

All attention turned to Paul Newman — a small septuagenarian with Hollywood good looks, actually named George Ruotolo — when he finally jumped out of his antique red hot rod and onto the crate he uses as an auction block. “I got 15 dollars,” he yelled as two white pigeons slammed around in their cage. “Who’s going to give me 20?”

He moved on to other lots when no one bought those specific birds, but it was a beautiful day, and a woman was selling cups of coffee with powdered creamer out of her car for only a buck a pop. Other homemade wares were available for discerning shoppers, like face masks that declared, “It’s a pigeon thing!” After the event ended, Mr. Malone hopped in his S.U.V. and began the hourlong trek back to Brooklyn.

“I only want to stay in this area because pigeons are accepted here,” he said. “I don’t want to go to Park Slope, where people are going to be complaining and I’m going to have to be fighting and spending money to keep my pigeons.”

Later, brewing a cup of coffee in the clubhouse he keeps next to his coops, he added, “There was a time in New York where people actually minded their business.”

Mr. Malone is nursing his injured pigeon back to health and is grateful for the intervention of the bar’s staff. He recognizes that gentrification poses an existential threat to his way of life but takes their willingness to help as an indication that he’ll win over his new neighbors in the end. He already has his eye on a different building on the same block in Ocean Hill.

“Sitting outside and seeing the birds flying and how pretty their colors are and how smart the pigeons are and the tricks they can do?” said Mr. Malone as he stood on his roof, taking in the wonder of it all. “Everyone loves something beautiful.”