Eleven people were killed and six injured on Saturday in what is believed to have been the deadliest attack on Jewish people in recent US history.

The victims had been at a baby naming ceremony.

Bowers was initially charged with 29 counts but, according to a federal indictment filed on Wednesday, he now faces 44 charges.

They include religious hate crimes, firearms charges and causing injury to police officers.

The suspect is believed to have shouted antisemitic slurs, including “all Jews must die” as he barged into the Tree Of Life synagogue in Pittsburgh’s Squirrel Hill neighbourhood. Authorities said he was armed with an AR-15 assault rifle – the same semi-automatic model used by last year’s Las Vegas gunman – and at least three handguns.

Bowers, 46, is due to appear in federal court in Pittsburgh on Thursday.

“We are dedicating the entire resources of my office to this federal hate crime investigation and prosecution.

“Please know that justice in this case will be swift and it will be severe.”

On Tuesday, US president Donald Trump visited the synagogue and met with some of the congregation’s leaders.

Those in Pittsburgh were divided, however, on whether he should be there.

Some blamed him for encouraging hatred and some said he should have waited until the funerals for the victims were over. 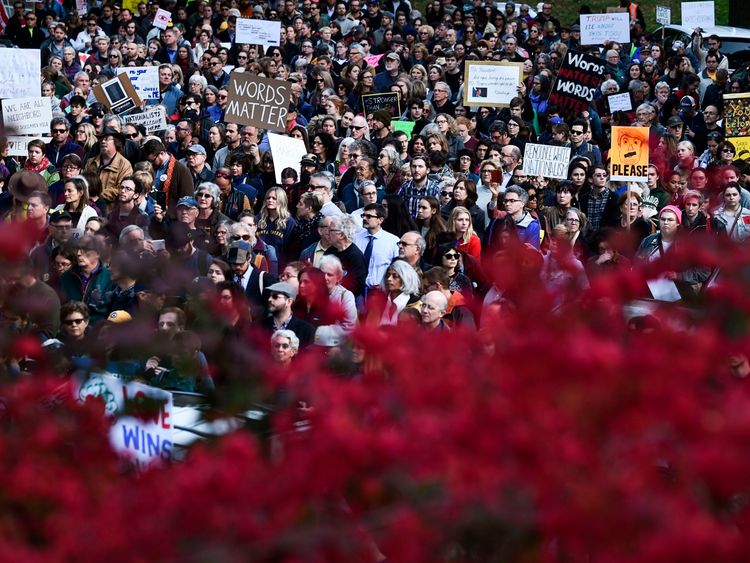 The president made no public comments during his visit on Tuesday but, posting on Twitter on Wednesday, Mr Trump insisted he and Melania were “treated very nicely” during their visit.

He tweeted: “Melania and I were treated very nicely yesterday in Pittsburgh. The Office of the President was shown great respect on a very sad & solemn day. We were treated so warmly. Small protest was not seen by us, staged far away. The Fake News stories were just the opposite-Disgraceful!”

US election: Both Trump and Biden still have paths to Electoral College win