BROOKLYN CENTER, Minn. — Officer Kimberly A. Potter was in the midst of a routine training day on Sunday, demonstrating her decades of policing know-how to less experienced officers in the Brooklyn Center Police Department.

But that training came to an abrupt and horrifying end when Officer Potter, who is white, shot Daunte Wright, a Black 20-year-old man, in his car as he tried to avoid arrest. Body camera video shows that the officer shouted “Taser!” while pointing a handgun at Mr. Wright, who was unarmed; she then fired a single round into his chest, killing him, in what the authorities in Minnesota have described as a deadly mistake.

With protests unfolding each night in Brooklyn Center, Officer Potter, a veteran officer of 26 years, and Tim Gannon, the department’s police chief, both resigned their posts on Tuesday. The abrupt departures came a day after the city manager who oversaw the department was fired, and as the city of 30,000 residents remained boarded up; National Guard troops stood with guns outside of the city’s police station, which has been the center of nightly clashes.

Outside of Officer Potter’s home in another Minneapolis suburb on Tuesday morning, police officers looked on as workers placed concrete barriers and black metal fencing all around the home, fortifying it in a fashion similar to the courthouse in downtown Minneapolis, where Derek Chauvin, a former Minneapolis officer who had trained younger officers, is on trial in the death of George Floyd.

Officer Potter, with her decades on the force, was acting as a training officer, assigned to guide less experienced colleagues on Sunday night, a spokeswoman for the police union that represents her said, when Mr. Wright was pulled over for an expired registration on his car.

The union that represents Officer Potter declined to comment on the events that followed, and her lawyer, Earl Gray, said that she did not wish to talk. City officials did not respond to requests for her employment records.

In 1995, she was first licensed as a police officer in Minnesota and took a job with the Brooklyn Center police. Officer Potter, 48, was the president of the police union in recent years, according to the Hennepin County Attorney’s Office. 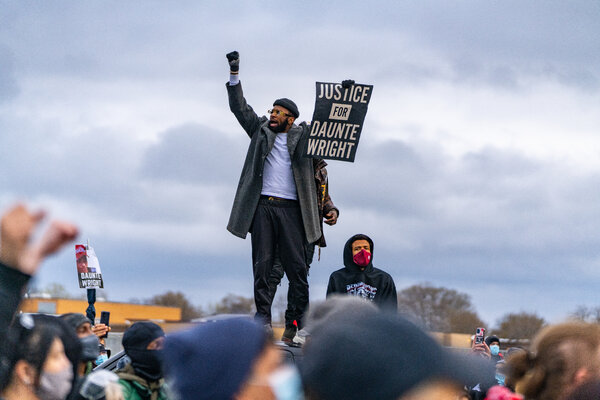 Officer Potter graduated from Saint Mary’s University of Minnesota, a small Catholic school, in 1994 with a criminal justice major, a school official said.

There is no indication in available records that she had shot anyone before. She was the police union president in August 2019, when she was one of the first officers to arrive on the scene after two Brooklyn Center police officers shot and killed Kobe Dimock-Heisler, 21.

A report later concluded that Mr. Dimock-Heisler, who was described as mentally ill, had lunged at a police officer with a knife during a domestic disturbance call. Officer Potter advised each of the officers to go into separate squad cars, turn off their body cameras and not talk to each other, according to the report last year by the Hennepin County attorney. No charges were filed in the case.

Officer Potter’s husband, Jeffrey Potter, was also a police officer, serving in the Fridley Police Department in Minnesota for 28 years until his retirement in 2017. According to a community newsletter, Mr. Potter was an instructor in the department, training officers in use of force, Taser use and crowd control.

In a letter Officer Potter sent to city officials on Tuesday, she said she had “loved every minute of being a police officer and serving this community to the best of my ability, but I believe it is in the best interest of the community, the department and my fellow officers if I resign immediately.”

At a news conference announcing the departures, Mayor Mike Elliott acknowledged that of the nearly 50 police officers in the department, he knew of none who actually lived in the city they patrolled.

“We do feel very strongly that we need officers to be from the community,” Mr. Elliott said. “People want justice. They want full accountability under the law. That’s what we will continue to work for,” he said.

The Bureau of Criminal Apprehension, a state agency in Minnesota, is conducting an investigation into Mr. Wright’s shooting, and the Washington County Attorney’s Office could bring charges against her.

Mr. Elliott also called for Gov. Tim Walz to transfer the case from the Washington County Attorney’s Office to the state attorney general, Keith Ellison, whose office is prosecuting Mr. Chauvin — a move that appeared unlikely.

On Tuesday afternoon, city officials in Minneapolis and St. Paul invoked a curfew of 10 p.m., preparing for more protests in the evening.

Tony Gruenig, a commander in the Police Department who was appointed acting chief of police on Tuesday, said he had not yet formulated a plan to respond to the anger in the community. “We’re just trying to wrap our heads around the situation and try to create some calm,” he said.

For many in Brooklyn Center, though, the day’s resignations brought little hope of real change. Michelle Winters, a resident of nearby Brooklyn Park, said justice would not be served until police officers who killed people were charged as if they were civilians.

“They should charge them as they charge one of us,” said Ms. Winters, who is Black and was standing in front of the Brooklyn Center Police Department on Tuesday, where protesters were gearing up for another night of demonstrations. No matter what the mayor does, she said, residents will not be satisfied unless the police stop killing people.

Weedkillers: What do we know about glyphosate?