Weather: Cloudy, with a high near 40. Scattered showers and flurries possible in the afternoon, turning to rain later. 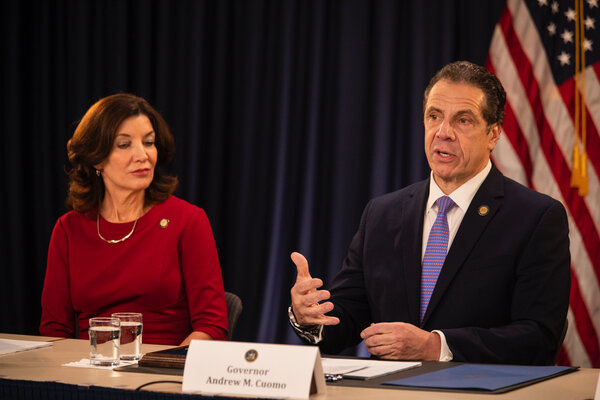 In recent days, much of New York’s Democratic congressional delegation, including both of its senators, have publicly called for the resignation of Gov. Andrew M. Cuomo, who is embroiled in twin scandals.

But only 35 percent of New York voters surveyed in a Siena College poll released on Monday agree with them.

[Half of the voters surveyed said the governor shouldn’t resign.]

The governor has refused to resign, even as New York’s attorney general investigates accusations from several women that he behaved inappropriately toward them, and the State Assembly takes steps toward possibly impeaching him.

Legislators have questioned whether the governor can effectively lead the state, but nearly half of the 805 registered voters in the Siena poll said they believed he could.

Still, Mr. Cuomo’s favorability rating has plummeted to 43 percent from 56 percent last month, one of the lowest points of his decade in office, the poll showed, and only 34 percent of those surveyed supported a possible run for a fourth term next year.

Six women, some of them current and former state employees, have accused Mr. Cuomo of sexual harassment or other inappropriate behavior.

Mr. Cuomo’s administration is also under federal investigation after it was accused of undercounting the number of coronavirus-related deaths at nursing homes in New York.

The possibility of Mr. Cuomo’s resignation has brought attention to Kathy Hochul, his lieutenant governor and the person who would run the state if he left office.

Ms. Hochul, who would be the first female governor in the state’s history, faces a daunting balancing act: navigating her longtime activism on behalf of women while dealing with complicated party politics and options for her future, all under intense scrutiny.

While many prominent Democrats have come out against Mr. Cuomo, the most powerful of all, President Biden, has largely held his tongue.

Asked on Sunday night whether Mr. Cuomo should resign, Mr. Biden said, “I think the investigation is underway and we should see what it brings us.”

A Drunken Hazing, a Fatal Fall and a Cornell Fraternity’s Silence

Officials indicted 40 people accused of being in a drug trafficking ring that packaged cocaine in day care centers. [NBC News]

Board of Elections data showed that some of New York City’s mayoral candidates were not the most regular voters. [City Limits]