New York’s Pride celebrations and protests came back with a vengeance over the weekend, after a muted celebration last year because of the pandemic.

Tens of thousands of people took over the streets of Greenwich Village on Sunday, starting impromptu dance parties and embracing the freedom of being together again.

Ahlasia Hunter, 23, who was attending her first Pride, danced and cheered from atop a traffic barricade on Sunday afternoon.

“Bro, the energy is amazing,” Ms. Hunter said. “If you don’t have a bucket list, you need to start a bucket list — you’ve got to come to Pride.” 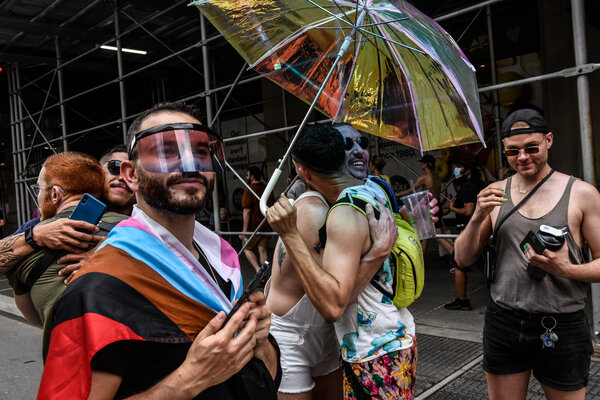 Last year, as people were encouraged to stay home because of the pandemic, the Pride March, which was celebrating its 50th anniversary, was reduced to a procession of several dozen people with no in-person audience.

Though the final weekend of June usually boasts hundreds of Pride events and draws millions of visitors to New York, the largest Pride event in 2020 was the second annual Queer Liberation March — an event that has drawn support for being an anti-police and anti-corporate alternative to more commercial gatherings.

Pride also arrived last year during the Black Lives Matter marches and demonstrations that followed the murder of George Floyd, which prompted popular events like the Dyke March to redirect supporters to Black-led marches and rallies.

This year, though the Pride March was virtual once again, thousands of people streamed down Fifth Avenue on Saturday for the Dyke March while the Queer Liberation March, held for the third time, brought thousands more to the streets on Sunday afternoon.

“I’ve been stuck inside for the past year and it’s just great to be out again and see other people,” said Amaris Cook, 19, who traveled from Springfield, Mass., to attend the Queer Liberation March.

Protests have continued this year too, many in response to the anti-transgender bills that have been introduced in states across the country.

A group of activists led by Qween Jean and Joel Rivera has been protesting at various locations around the city, including Stonewall, every week, and the Brooklyn Liberation March — which drew an estimated 15,000 people last year — returned to the Brooklyn Museum earlier this month in support of Black trans and gender-nonconforming youth.

While this weekend’s crowds were mostly peaceful, the scene in Washington Square Park — where a heightened police presence has been enforcing a nighttime curfew — boiled over in the late afternoon, with clashes between police and protesters. Some protesters said the police used pepper spray.

After a quiet year, venues have also been eager to usher people back onto the dance floor. New York’s gay and lesbian bars welcomed long lines of patrons back indoors after months of outdoor service.

The city’s many underground raves and after-hours parties rumbled into the wee hours of Sunday morning and afternoon: Papi Juice — the party collective that centers queer and trans people of color — returned to Elsewhere, a music venue in Bushwick, Brooklyn, for 12 hours of partying, while Nowadays’s Nonstop Pride party ran for more than 24 hours in the Ridgewood neighborhood of Queens.

“This is my favorite party in the city and I do not fit in anywhere else,” Mx. Cox said. “I need real queer nightlife — I’m post-binary; I’m weird; and I just don’t feel comfortable in places like Hell’s Kitchen.”

“This has always been a haven for me,” Mx. Cox said.