The unoccupied home of an interracial couple in Sterling, Ohio, exploded early Wednesday morning, and officials found a misshapen swastika and a misspelled anti-black slur painted on their garage.

The incident was being investigated as a possible hate crime by the local police, the F.B.I. and other agencies, according to Capt. Doug Hunter of the Wayne County Sheriff’s Office.

The explosion was reported by a neighbor around 12:40 a.m. on Wednesday. The couple had been staying at a hotel nearby as they renovated their home after an electrical fire on July 3.

The couple’s home in rural Sterling was the last house on a dead-end street, Captain Hunter said. A neighbor’s garage and vehicles had also been spray-painted, but there were no discernible words on them, he said, adding that the authorities were not aware of any security cameras that might have caught the vandalism.

One of the homeowners, Angela Frase, told reporters that she had lived there with her husband for 23 years without any major problems. When a reporter asked what was going through her head, she answered, “Disbelief, that there’s still this much hatred in America.”

“We decided that whatever happens, we’re not rebuilding here,” she said. “We’re not coming back. We’re done.”

Captain Hunter said that on Tuesday morning, workers who were renovating the home called the Fire Department to report that the stove had been left on, filling the house with gas. In response, the local utility had shut off the gas. The electricity had already been shut off. 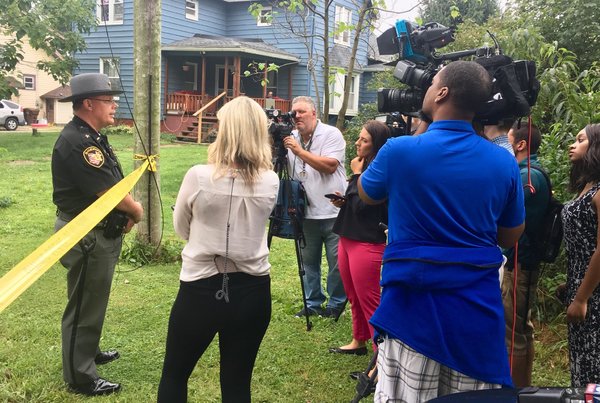 Ms. Frase said that investigators had told her it was possible that an intruder sparked the explosion with a cigarette — and that whoever was responsible died in the fire.

The Frases could not immediately be reached for comment on Wednesday.

There were no suspects as of Wednesday afternoon, Captain Hunter said. The Blue Ribbon Arson Committee was offering a $5,000 reward for information leading to an arrest in the case.

Karen Zraick is a New York-based reporter and editor, covering a wide variety of stories with a focus on breaking news. Previously she wrote the Evening and Weekend Briefings, and worked on the International Desk and the home page team. @karenzraick