In a Queens neighborhood near John F. Kennedy Airport, many middle-class families of color have found something that eludes most New Yorkers: homeownership.

A little more than a year ago, though, rivers of raw sewage flooded 127 homes in the neighborhood, South Ozone Park, forcing people to evacuate. Some slept in cars. Others moved into motels.

The cause of the backup, which happened just after Thanksgiving 2019, was a collapsed sewer pipe, and the city accepted responsibility after initially blaming residents for pouring cooking grease down drains. But despite initial promises of help, residents said, the city has been slow to pay homeowners or has failed to offer enough money to cover repairs.

In a pandemic that has already taken a disproportionate toll on Black and Latino people, the generational wealth that families said they thought they were building has, in some cases, dwindled to nearly nothing. Residents say their homes — a big source of financial security — are in disrepair. Some have taken on credit card debt. Others have raided retirement funds and savings accounts to cover bills.

Only a third of New York City households own their home, according to data from the 2018 American Community Survey. Of those homeowners, 44 percent are Asian and 43 percent are white, while 27 percent are Black and 17 percent are Latino.

“I don’t think that if this had happened in a white neighborhood, this would have happened this way,” said Janice Harmon, one of the South Ozone Park homeowners, who is Black. “It’s like someone spitting in your face.” 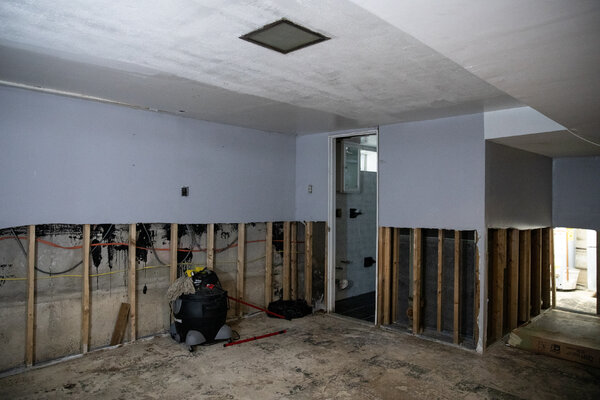 The incident shows how infrastructure failures, coupled with an inadequate government response, can have an outsize impact on communities of color and exacerbate financial inequality, said Natalie Bump Vena, an urban studies professor at Queens College who has been researching the sewage flood and its impact.

“This is a problem of environmental racism,” she said. “Some communities are better able to react and respond and recover.”

So far, the city has paid out about $1.1 million, with about a quarter of the claims still unresolved, according to the city comptroller’s office, which handles the process. Some residents said they felt pressured to take low offers to cover mounting bills. Basic homeowner and tenants’ insurance in New York State either does not cover, or limits coverage, for sewer backups.

One point of confusion has been the practice that the city follows and argues is their legal responsibility — covering the depreciated value of lost property, not the original value. If someone purchased a couch for $1,000 a decade ago and it was ruined, they may only get $300 from the city today, even if that is not enough to buy a new couch.

Bill Neidhardt, the press secretary for Mayor Bill de Blasio, blamed the comptroller’s office for delayed payments. “The city has accepted responsibility, and we urge the comptroller to make these payments as quickly as possible to make these families whole again,” Mr. Neidhardt said in a statement.

A spokeswoman for Scott M. Stringer, the city comptroller, said the office has worked swiftly.

“We also recognize that the sewage backup aftermath has underscored systemic inequities that cannot be fully alleviated within the legal limitations of the powers of the comptroller’s office,” said Hazel Crampton-Hays, the press secretary for Mr. Stringer, who is running for mayor.

Initially, homeowners had believed the city would fully reimburse them, they said. They had felt that they had been discouraged from hiring lawyers, though city officials had told them that was an option.

Now, 19 people have filed a joint lawsuit, and another 15 families are being represented by pro bono lawyers through the South Ozone Park Sewage Legal Assistance Project, an initiative of the New York Lawyers for the Public Interest.

Craig Phemister, the lawyer who is representing the 19 residents who filed suit, said the city’s response has been hurtful. “You put people in a situation where they are out of their home, or can barely stand to be in their home, and then you expect them to fight you on top of it,” he said.

Some of the residents have suffered profound losses during the pandemic. Mark Prescott, 54, one of the plaintiffs of the lawsuit, and his mother, Barbara, evacuated their home after the flood and moved into a motel.

Last spring, she fell at the motel, fractured a rib and was admitted to a hospital. She contracted Covid-19 and died on April 30. After her death, he moved back into the house, although it had not been repaired.

Mr. Prescott, who lost most of his possessions in the flood, has a prosthetic leg, and the only shower that he can access is in the basement. He cannot afford to make repairs until he receives payment from the city. “All I want is what was taken from me,” said Mr. Prescott. “I can’t get my mother back.”

Ms. Harmon, 50, is also a plaintiff in the lawsuit. A nurse who had been administering convalescent plasma trials to Covid-19 patients, she used savings and dipped into retirement funds to clean her house and replace lost clothing, mattresses and appliances.

She said she is concerned that the home that she and her husband bought about 20 years ago has depreciated in value and would be difficult to sell in its current condition.

The cause of the pipe collapse that caused the flooding remains unclear: Officials determined it would be too costly to investigate. But the sewers in southeast Queens, where the flood occurred, need an upgrade.

As Southeast Queens developed in the years following World War II, the city did not invest in essential infrastructure, and the area lacks adequate storm water drainage, said Edward Timbers, a spokesman for the city Department of Environmental Protection.

A $2.2 billion city plan that includes funding to build out the drainage system in the area is already underway and includes a large new storm sewer to serve South Ozone Park that will take more than five years to complete.

But residents say they don’t know who to turn to for help right now.

Sheron Tikaram, 37, a paralegal with two young children who bought her home in 2013, said she submitted an estimate from a contractor for about $37,000 to fix the damage.

She filed a claim for $63,000 that included lost property. The city offered her about $11,000. Ms. Tikaram kept pushing. The claims specialist increased the offer slightly to about $19,000 but would not cover the full amount.

“Who do we turn to? Who’s supposed to assist us? What do you do? You’re completely helpless,” she said. “It is just really unfair because we’re all taxpayers. We own our homes. They are damaged and it’s, ‘Too bad.’”