Raymond J. Donovan, who resigned as labor secretary in the Reagan administration while facing criminal charges of having earlier schemed to defraud New York City of millions of dollars when he was a New Jersey construction company executive — charges of which he was acquitted by a jury — died on Wednesday at his home in New Vernon, N.J. He was 90.

The fraud charges were in an indictment that the Bronx district attorney obtained in 1984 in one of two criminal investigations that buffeted Mr. Donovan’s tenure as labor secretary, from February 1981 to March 1985.

The other investigation was by a federal special prosecutor who pursued allegations that Mr. Donovan — also before he joined the government — had had connections with organized crime figures and had witnessed an illegal payoff to a union leader. That investigation ended without charges being brought.

Mr. Donovan denied wrongdoing during both investigations, calling himself a victim of “baseless allegations” and “vicious attacks.” He traced the accusations in the indictment to people he called lying informers and said the Bronx district attorney, a Democrat, had been politically motivated to seek a high-profile Republican scalp.

Nevertheless, he resigned from the government five months after he was indicted when a judge refused to dismiss the charges. After he was acquitted, in a widely quoted remark, he said, “Which office do I go to to get my reputation back?”

Mr. Donovan’s legal battles were just one line of contention that dominated his time as labor secretary. Another was his antagonistic relations with top leaders of organized labor. 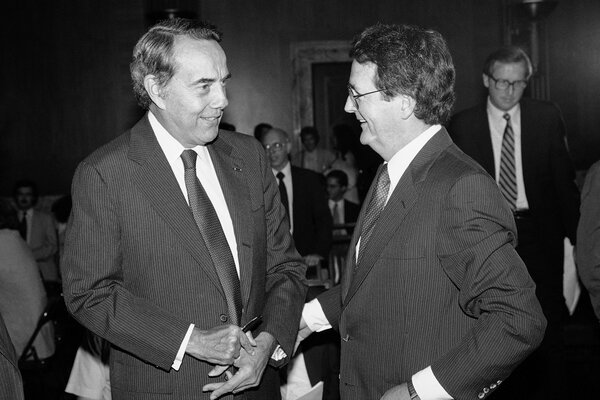 The previous Democratic administration of Jimmy Carter had enacted or proposed regulations strengthening a number of employment standards, including those on occupational safety and health. Mr. Donovan withdrew or suspended them.

At the same time, he sought to reverse decades-old laws prohibiting workers in several industries, like the knitted outerwear business, from working at home, and to expand the types of jobs and hours that 14- and 15-year-olds could legally work.

Labor leaders said such steps would foster violations of minimum wage, child labor and other laws. Mr. Donovan countered, “We are not cutting out any health and safety requirements meaningful to the protections of workers.” Rather, he said, the Labor Department was “changing the approach” to labor practice, scrapping what he called a regulatory “police state mentality” that had prevented some American industries from being competitive with their foreign counterparts.

Mr. Donovan, however, did not play a central decision-making role in the Reagan administration’s biggest labor confrontation — over an illegal strike in 1981 by most of the nation’s air traffic controllers, for which the president fired them. The Transportation Department, not the Labor Department, took the lead on the government side because the controllers worked for the Federal Aviation Administration, part of the transportation agency.

Mr. Donovan, who had grown wealthy in the construction industry before joining the administration, held that his early life struggles and his working career had given him insight, he said, into “what workers’ needs are and what motivates them.”

Raymond James Donovan was born on Aug. 31, 1930, in the St. Andrew’s section of Bayonne, N.J., the seventh of 12 children of David and Eleanor Donovan. Both parents died by the time he was 18, leaving the older children to raise the younger ones.

Ray attended St. Andrew’s School and St. Peter’s Prep in Jersey City, then went on to study at Holy Trinity Seminary in Alabama and the Notre Dame Seminary in New Orleans, graduating in 1952. But instead of going into the Roman Catholic priesthood, as he had considered, he returned to Bayonne. “It was my turn to take care of the younger ones,” he said in a 1980 interview with The New York Times.

Mr. Donovan was a member of the electrical workers union and also worked in the insurance business until 1959, when he joined the Schiavone Construction Company, then a small, three-year-old New Jersey concern. Becoming executive vice president in 1971 — a position in which he oversaw labor relations and negotiated with the unions — he helped expand Schiavone into a major heavy-construction company. He and the founder, Ronald A. Schiavone, owned 90 percent of its stock.

Mr. Donovan married Catherine Sblendorio in 1957. She survives him, along with their daughter, Mary Ellen Stewart; two sons, Ken and Keith; nine grandchildren; a great-grandson; and two of his siblings.

A Democrat early on, Mr. Donovan said he became a Republican when he found himself more in tune with its principles. Reagan nominated him for labor secretary after Mr. Donovan had been a major fund-raiser and a New Jersey campaign leader for him in the 1980 presidential election.

His confirmation hearing in the Senate was rocky. It unearthed allegations by underworld informers that Mr. Donovan and his company had been involved in payoffs to union extortionists to obtain labor peace, and that they had engaged in both business and social activities with organized crime figures. The F.B.I. said it could not corroborate the allegations, and the Senate approved the nomination in February 1981.

But the following December, a special prosecutor was appointed to take a new look at Mr. Donovan’s construction company activities after an allegation surfaced that had not been passed on to the Senate at the time of the hearing.

The accusation was by an informer who said that he was with Mr. Donovan and other Schiavone company officials at a Queens restaurant in 1977 when one of the officials handed an envelope containing $2,000 to the president of a local construction union. Mr. Donovan responded that not only had he not witnessed any payoff, but that he had also never in his life been in that restaurant.

After a six-month investigation — which also re-examined the former allegations of Donovan ties to crime figures — the special prosecutor, Leon Silverman, said he had found no corroborating evidence of the payoff or of the lunch. Overall, he said, “there was insufficient credible evidence to warrant prosecution of Secretary Donovan on any charge.”

Two months later, after reopening the investigation to look at still other allegations of past connections with crime figures, Mr. Silverman issued the same finding.

Mr. Donovan said that he felt vindicated but that he would have been far happier if Mr. Silverman had couched his findings in words more positive for Mr. Donovan than “insufficient credible evidence.” The phrase “boils my blood,” he said.

The Bronx indictment was announced in October 1984 — the first ever of an incumbent presidential cabinet member, a Library of Congress researcher said at the time. It accused Mr. Donovan and nine other men — officials of his company and of a subcontracting company — of scheming in the 1970s to steal $7.4 million from the New York City Transit Authority through fraudulent transactions in a project in which Schiavone was constructing a subway tunnel.

Denying political motivations, the Bronx district attorney, Mario Merola, said his office had come upon the purported scheme while conducting another investigation.

In May 1987, Mr. Donovan and seven other men were acquitted of all charges by a jury that had deliberated barely 10 hours after an eight-month trial. Several jurors said they had found the evidence sorely lacking and said the indictment should not have been brought.

Mr. Donovan later served as president of Schiavone until the company was sold in 2007.

US election: Joe Biden closes in on Donald Trump in battleground of Georgia as White House race heats up

No Address, No ID, and Struggling to Get a Stimulus Check