Several areas in the Midwest experienced record flooding this past week, with high water on Saturday causing more levee breaches on the Missouri River, prompting widespread evacuations and isolating neighborhoods and towns.

Record-high river levels were reported in at least 38 locations in the Midwest, particularly in Nebraska and Iowa, said Jonathan Erdman, a senior meteorologist with weather.com. Heavy flooding was also reported in Wisconsin, Minnesota and South Dakota, and the National Weather Service said it would continue past the weekend.

At least one man was confirmed dead in Columbus, Neb. The Omaha World-Herald reported that the man had been trying to help someone stranded by floodwaters on Thursday when a bridge collapsed as he was crossing it. Officials in Fremont County, Iowa, confirmed another flood-related death on Saturday.

The devastation was captured in dramatic photographs circulated on social media by those who surveyed the damage. Senator Ben Sasse and Gov. Pete Ricketts of Nebraska showed how floodwaters from the Niobrara River in the northern part of the state had ripped through a dam on Thursday, releasing a torrent of water and depositing huge chunks of ice onto fields and roadways. 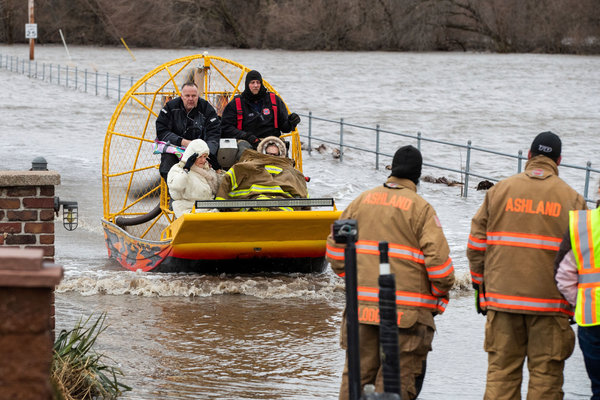 They shared photos of water rushing over riverbanks and encircling homes and neighborhoods.

Floodwaters had surrounded the town of Fremont, Neb., about 40 miles northwest of Omaha, said Councilwoman Linda McClain. The town sits between the Platte River to the south and the Elkhorn River to the north. Both rivers had overflowed their banks, Ms. McClain said.

Ms. McClain said she spent Saturday visiting shelters where people who had been displaced were congregating. About 75 people had been reluctant to leave their homes, but as the buildings took on water, they were rescued by airboats and taken to the shelters, she said. Many homes were flooded by as much as three or four feet of water.

Parts of the city had been under a mandatory evacuation.

Tech. Sgt. Rachelle Blake, of the United States Air Force, said several buildings on the Offutt Air Force Base, which is south of Omaha, had been evacuated as water from Papillion Creek, a tributary of the Missouri River, flooded the southeast part of the base. She said the northwest part of the base was largely unaffected.

She said that it was too soon to quantify the damage, but that buildings and hangars were underwater. Aircraft had previously been moved to higher ground.

Base personnel and their families were working around the clock to place sandbags and barriers to stop the encroaching floods.

“We think it’s going to be another 24 hours before it stops rising,” Sergeant Blake said.

It is not unusual for the Midwest to experience spring flooding as ice thaws. But the past week’s widespread devastation was months in the making, as a cold winter left the ground frozen and not absorbent, Mr. Erdman said.

Then temperatures rose, melting the snowpack. It also started raining. On Friday, Mr. Ricketts said at a news conference that the flooding was the worst the state had experienced in a half-century.

“The storms this week have been extremely difficult for many of our communities,” Ms. Noem said in a statement. “This has been a statewide emergency with people impacted by heavy snow, high winds, rain, and freezing rain.”

The authorities were still working to handle the situation on Saturday. In addition to the confirmed fatalities, a man whose home near Spencer, Neb., was destroyed when the dam breached was reported missing, according to the authorities. A man in Norfolk, Neb., is also missing.

The floodwaters also created new problems. Levees along the Missouri River were breached in two areas near Peru, Neb., prompting authorities to issue warnings of a flash flood, according to the National Weather Service.

The Omaha District of the United States Army Corps of Engineers said Saturday evening that there had been “numerous levee breaches” on the Missouri River, and that it expected more breaches in the next 24 hours.

The Missouri River could rise as water from its tributaries continues to drain, Mr. Erdman said.

Nebraska state officials did not say how many homes were damaged or how many people needed rescue. Evacuations were taking place throughout the state, according to the governor’s office.

In California, a ‘Surprise’ Billing Law Is Protecting Patients and Angering Doctors