Home » Americas » Record money for Monet at US auction 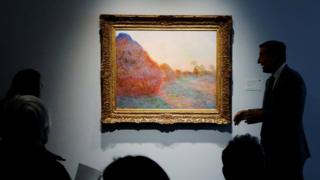 Monet completed the oil painting in 1890 as part of his Meules (Haystacks) series, depicting rural life near his home in the Normandy region.

The sale is also the first time an Impressionist painting sold for more than $100m.

Until then it had been in the hands of one family – who bought the piece directly from the artist’s dealer – for nearly a century.

A Sotheby’s press release said the painting is now the ninth-most expensive work ever sold at auction.

Its buyer reportedly beat five other bidders at the sale in New York. Sotheby’s did not name the new owner.

Monet’s Haystacks series had 25 paintings, the majority of which hang in art galleries around the world.

This is one of only four of his works to go under the hammer this century.

Nymphéas en fleur was previously the most expensive Monet painting, selling for $84.7m in May 2018.