Overcoming a swell of anti-Trump sentiment in New York City, Nicole Malliotakis, a Republican state assemblywoman, defeated Representative Max Rose to give her party a lone seat in the city’s House delegation.

The defeat of Mr. Rose, who conceded on Thursday, was not completely unexpected. The district, which covers Staten Island and a portion of South Brooklyn, is the most conservative in the city; it was the only New York City congressional district that President Trump won in 2016.

Yet Ms. Malliotakis’s victory was a stark illustration of the sharp political divisions in New York.

Mr. Biden easily carried the state, and most Democratic House candidates in New York City coasted to victory. It was different, however, in swing districts across the state, including two congressional contests each on Long Island and in Central New York where Republicans jumped out to commanding leads.

It was also different in the 11th Congressional District, which Mr. Rose won in 2018. Indeed, Mr. Rose, 33, ran as a centrist, even attacking a fellow Democrat, Mayor Bill de Blasio, in campaign ads, calling him the “worst mayor in the history of New York City.”

Mr. Rose has also been far more reluctant to criticize Mr. Trump than his Democratic colleagues. Although Mr. Rose eventually voted to impeach the president last year, he had opposed the impeachment hearings and was one of the last Democrats to decide to impeach Mr. Trump. 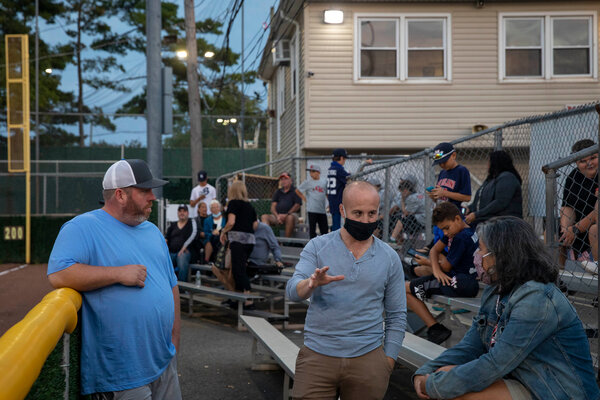 But in April, he told Politico that he would be fine with President Trump’s winning a second term, as long as it meant that the nation was better placed to control the coronavirus pandemic.

In June, Mr. Rose attended a demonstration in Staten Island to protest the death of George Floyd. His participation became a focal point of Ms. Malliotakis’s campaign, enabling her to accuse Mr. Rose of being a supporter of efforts to defund the police.

“She exploited Rose’s moderacy, and made much of the fact that he participated in a B.L.M. rally, and that played really well with the communities in the South Shore,” said Richard Flanagan, a professor of political science at the College of Staten Island.

Mr. Rose had characterized his participation in the protest as a gesture of unity.

“For a brief moment, we didn’t see each other as Democrats or Republicans, but as Americans in pain and searching for a way to heal,” he said in an election night speech. “It may feel like a long time ago.”

Being viewed as anti-police and, for that matter, anti-Trump, probably hurt Mr. Rose in the conservative district, even though it has slightly more registered Democratic voters than Republican. For much of the last 75 years, a Democrat has held the seat; in the past decade, though, two Republicans, Michael Grimm and Dan Donovan, won the office.

For a first-time House candidate, Ms. Malliotakis, 39, had ample name recognition: In addition to her work in the State Legislature, she also ran for New York City mayor in 2017.

“This city has seen a significant shift to the left that’s made a lot of people uncomfortable in our community,” she said in an interview the day after Election Day. “I will be a voice that will provide a different perspective, and that’s where you get good policy — when you have a debate and hopefully end up somewhere in the middle.”

She also focused on family values, crime rates and public safety, running ads that linked Mr. Rose to the mayor’s efforts to close the jails on Rikers Island, to overhaul bail laws and to amend police funding.

“Fewer cops on the street may be great for violent criminals, but it’s outright dangerous for the rest of us,” she said in an ad. The state assemblywoman was endorsed by the city’s five police unions.

Ms. Malliotakis had led by about 37,000 votes after the machine count, and Mr. Rose would have had to capture the vast majority of the mail-in ballots to close the gap.

“As we continue to count every ballot and are on track to narrow the gap by tens of thousands of votes,” Mr. Rose said in a statement on Thursday, “it is now clear we will fall short.”

Though she initially distanced herself from the president in 2017, saying that she regretted voting for him, Ms. Malliotakis has since stressed her support for Mr. Trump, winning his endorsement earlier this year and holding a “get well” rally for him after his Covid-19 diagnosis.

For Pregnant Women, a Push to Head Off Depression Before It Starts