THOUSAND OAKS, Calif. — It was college night when a gunman entered Borderline Bar & Grill late last Wednesday, the dance floor packed with students trying to let off some steam, drink a little beer and line dance to the country music blaring in the background. It was the type of night that would be familiar to college students anywhere.

But also familiar for this generation and the young people at Borderline are the regular lockdowns and active shooter drills that are a part of campus life where mass shootings seem like a constant threat. This time, the shooting wasn’t on campus, but many of those who survived were students at nearby schools, including California State University Channel Islands and California Lutheran University. Among the 12 people killed that night was Alaina Housley, a freshman at Pepperdine University, and Justin Meek, who graduated from California Lutheran University in May.

[Read the latest developments on the California fires.]

After the shooting, several campuses canceled classes. More colleges did the same a day later, when thousands were forced to evacuate because of wildfires. On Monday, Cal Lutheran reopened, but the campus remained unusually quiet, with many students still absorbing the news and mourning the death of Mr. Meek, who worked as a bouncer at Borderline. The campus chapel has been open around the clock and professors have promised to give students as much time as they need to complete their coursework.

It will take a long time for campuses to return to normal. We spoke to several students as they returned to classes about the shooting and what Borderline meant to them.

Bryce Colvard, 21, Cal Lutheran University: ‘I waited for a delay in the shots’

I’ve been going to Borderline as long as I’ve been in college. My friend Justin Meek, who was killed there that night, worked as a bouncer. We’d go once or twice a month and there was always Justin. There was never a time where I felt unsafe in any way.

When we arrived around 10:30 p.m. I gave Justin a big hug at the door and we just kind of made our rounds. We were hanging out near the back wall looking at the stage when we heard the loud noise.

I waited for a delay in the shots, and the second I heard that, I assumed he was reloading. I grabbed my friend who didn’t want to get up. I told her, “We’ve got to go right now.” We jumped out of the window out back and started running. We stopped at another restaurant and started banging at the door. They immediately barricaded the doors and took us into the kitchen. That’s where we saw my friend had a severe wound on her hand from the window.

My father is a registered gun owner, so that’s how I knew what to listen for at the right second. When I was younger, he made sure we were very educated, to take away any chance of us getting curious without him. He took us to the gun range and was very adamant that we knew safety around guns. It was strictly for the purpose of home defense and at the shooting range.

I recognize this was a handgun. But there is no reason any of those assault weapons should ever be accessible to civilians. They should never fall into the hands of someone not trained with the military. I am not of the opinion that we need to or should take everyone’s guns away. We also really need to check up on someone’s mental health. People who might do harm, people who are on the edge, they should not have their hands on a gun. 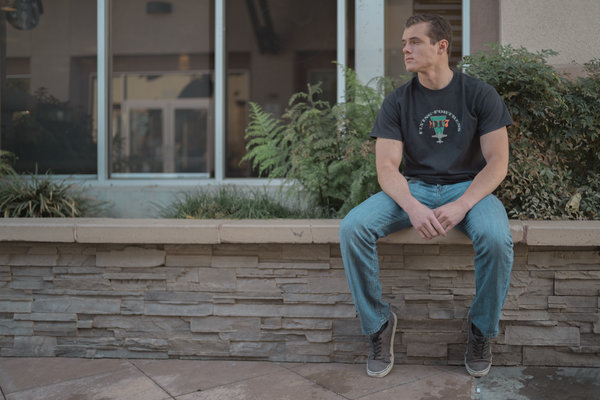 Cole Knapp, 19, Moorpark Community College: ‘Good people need guns. But Borderline would not have been a place for that.’

There’s not much for people who are underage to do, so Borderline was it for us. I’m there virtually every week. There were always people there who teach you how to dance.

I saw him come in and reach up to the desk and didn’t think anything of it. Then I saw him reach for the gun and I knew right away what it was. I grew up around guns, we went to a shooting range for the first time when I was 9 years old. We were taught the strictest gun safety, that this is not something to play with.

Somehow when it happened all the fear drained out of me. I just knew everyone needs to get out now. I looked for the closest out and went. I ran toward the road and saw officers pointing rifles. Then I felt safe. I stayed in the parking lot until 8 a.m. Then I went to the teen center, where people were still waiting for others. That seemed like the best thing to do.

I am a big proponent of allowing concealed firearms. And that’s next to impossible to get in California. Good people need guns. But that being said, Borderline would not have been a place for that. Taking a gun into a place with alcohol is the biggest no-no for people who are smart. You need to have good judgment, and the biggest thing that effects judgment is alcohol.

There should have been armed security. But I am of the mind-set that it all depends on the situation. Guns aren’t a black and white issue.

Lara Edwards, 19, Moorpark Community College: ‘People haven’t even picked up their cars from the bar yet.’

This was my place, where you could decompress after a hard week and dance and be care free. Almost everyone was a student or recent graduate.

I was in the middle of the dance floor and heard three or four loud pops. I turned to where the door was and saw flashes and that was kind of when everyone realized what was going on. I ran off the dance floor and dove underneath a table. I realized that there was an exit door to my left and I ran out of there, that’s when the second round of shots started.

People were screaming to get down, and I felt like I was the last person to leave the dance floor. I felt like I was standing there for longer than everyone else — all by myself. It was just me, alone, but with him.

[Here’s how you can help those affected by the fires.]

I think everyone knew, they just didn’t want to believe that’s what it was, and you have to understand so you can act fast. After I moved here from England when I was 10, we always did lockdown drills in school. But no one can ever really prepare you to be in a bar like this. There’s nowhere to hide. This is absolutely something you can’t ever really prepare yourself for.

It’s still so early: People haven’t even picked up their cars from the bar yet. We’re just talking and being there for each other in town for now.

Stephen Maxey, 19, student at Moorpark Community College: ‘What are the chances I’d be at a place someone would want to shoot up?’

I’ve been going there almost every Wednesday since 2017, sometimes other nights too. It’s a great place for dancing. I spend the whole time dancing many nights, so that’s where I was when the shots started. Sometimes there’s problems with the sound system, so that’s what I first thought, even though the pops weren’t coming from that direction. Then people started to scream and duck. I started running to the back and tripped over someone as the gun shots continued. I moved to the back door and it was just chaotic. I ran up the street toward the freeway.

I was in complete shock, with just so much adrenaline. I was not thinking. I would have expected to be more scared. I’ve seen all these things on television, who hasn’t, but never for a second worried about it happening in a place I was. What are the chances I’d be at a place someone would want to shoot up? Not here.

I want to go back, maybe. It’s hard to say. It’s too early. Mostly I’ve just been spending time with friends, people who were there that night. We’re all still in shock. Then there were the fires so nothing is normal yet.

Backlash Against Sanders and Ocasio-Cortez in Queens