The New York City mayor’s race began in the throes of a pandemic, in a shuttered city convulsed by a public health catastrophe, economic devastation and widespread protests over police brutality.

Now, with voters heading to the primary polls on Tuesday, New York finds itself in a very different place. As the city roars back to life, its residents are at once buoyed by optimism around reopenings, but also anxious about public safety, affordable housing, jobs — and the very character of the nation’s largest city.

The primary election marks the end of an extraordinary chapter in New York’s history and the start of another, an inflection point that will play a defining role in shaping the post-pandemic future of the city. The leading mayoral candidates have promoted starkly divergent visions for confronting a series of overlapping crises, making this primary, which will almost certainly determine the next mayor, the most significant city election in a generation.

Public polling and interviews with elected officials, voters and party strategists suggest that on the cusp of Tuesday’s election, Eric Adams, the Brooklyn borough president, is the front-runner, fueled by his focus on public safety issues and his ability to connect in working- and middle-class communities of color. 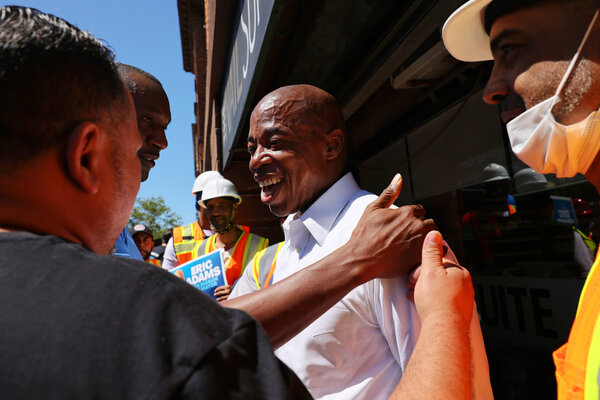 Yet even on the last weekend of the race, the contest to succeed Mayor Bill de Blasio appears fluid and unpredictable, and credible polling remains sparse.

Two other leading candidates, Andrew Yang and Kathryn Garcia, campaigned together on Saturday in Queens and Manhattan, a show of unity that also injected ugly clashes over race into the final hours of the election, as Mr. Adams accused his rivals of coming together “in the last three days” and “saying, ‘We can’t trust a person of color to be the mayor of the City of New York.’”

Mr. Yang, at a later event, noted that he had been “Asian my entire life.” (Mr. Adams later clarified that he meant that Mr. Yang and Ms. Garcia were trying to prevent a Black or Latino candidate from becoming mayor.)

The primary election will ultimately offer a clear sense of Democratic attitudes around confronting crime, a major national issue that has become the most urgent matter in the mayoral primary.

The outcome will also show whether New Yorkers wanted a political outsider eager to shake up City Hall bureaucracy, like Mr. Yang, or a seasoned government veteran like Ms. Garcia to navigate staggering challenges from issues of education to evictions to economic revival.

And it will reveal whether Democrats are in the mood to “reimagine” a far more equitable city through transformational progressive policies, as Maya D. Wiley is promising, or if they are more focused on everyday municipal problems.

In recent polls and last-minute fund-raising, Ms. Garcia, the city’s former sanitation commissioner, and Ms. Wiley, a former counsel to Mr. de Blasio, seem to be gaining late traction, while Mr. Yang, a former presidential candidate, remains a serious contender even amid signs that his momentum may have stalled.

But other factors may muddy the outcome.

For the first time in New York City, the mayoral nominee will be determined by ranked-choice voting, which allows New Yorkers to rank up to five candidates in order of preference. Some New Yorkers remain undecided about how to rank their choices, and whether to rank at all.

And with many New Yorkers accustomed to a primary that usually takes place in September, it is not at all clear what the composition of a post-pandemic June electorate will look like.

For such a high-stakes election, the contest has felt at once endless and rushed. For months, it was a low-key affair, defined by dutiful Zoom forums and a distracted city.

The final weeks have more than made up for an initial dearth of drama, with frequent controversies: There were sexual misconduct allegations against Scott M. Stringer from decades ago, which he denied; a unionization uprising on Dianne Morales’s campaign and questions over Mr. Adams’s residency that prompted him to give journalists a narrated tour of what he said was his ground-floor apartment.

But if there has been one constant in the last month, it has been the centrality of crime and policing to the contest.

“Public safety has clearly emerged as a significant issue,” said Representative Hakeem Jeffries, New York’s highest-ranking House member, when asked to name the defining issue of the mayor’s race. “How to balance that aspiration with fair, respectful policing, I think has been critical throughout the balance of this campaign.”

Six months ago, few would have predicted that public safety would be the top issue of the race, only a year after the“defund the police” movement took hold in the city. Crime rates are far lower than in earlier eras, and residents are confronting a long list of challenges as the city emerges from the pandemic.

But amid a rise this spring in shootings, jarring episodes of violence on the subways, bias attacks against Asian Americans and Jews — and heavy coverage of crime on local television — virtually every public poll shows public safety has become the biggest concern among Democratic voters.

Mr. Adams, Ms. Garcia, Mr. Yang and Raymond J. McGuire, a former Citi executive, vigorously disagree with the “defund the police” movement. But no one has been more vocal about public safety issues than Mr. Adams, a former police captain who has declared safety the “prerequisite” to prosperity.

Mr. Adams, who had a complex career at the Police Department and battled police misconduct as a leader of 100 Blacks in Law Enforcement Who Care, an advocacy group, says that he was once a victim of police brutality himself, and argues that he is well equipped to manage both police reform and spikes in violence.

In recent weeks, however, Mr. Adams has come under growing scrutiny over questions of transparency and ethics tied to taxes and disclosures around real estate holdings. That dynamic may fuel doubts about his candidacy in the final days, as his opponents have sharply questioned his judgment and integrity.

If he wins, it will be in part because of his significant institutional support, as a veteran politician with union backing and relationships with key constituencies — but also because his message connects at a visceral level in some neighborhoods across the city.

“Mr. Adams! You got my vote!” Blanca Soto, who turns 60 on Monday, cried out as she walked by an Adams event in Harlem on Thursday.

“I am rooting for him because he’s not going to take away from the police officers,” said Ms. Soto, a health aide, who called safety her top issue. “I do want to see more police, especially in the subways. We had them there before. I don’t know what happened, but everything was good when that was going on.”

Mr. Stringer, the city comptroller; Shaun Donovan, a former federal housing secretary; Ms. Morales, a former nonprofit executive; and Ms. Wiley have taken a starkly different view on several policing matters. They support varying degrees of cuts to the Police Department’s budget, arguing for investments in communities instead. The department’s operating budget has been about $6 billion. Ms. Wiley, Mr. Stringer and Ms. Morales have also been skeptical of adding more police officers to patrol the subway.

Ms. Wiley argues that the best way to stop violence is often to invest in the social safety net, including in mental health professionals, violence interrupters and in schools.

An Isolation Center Opened to Protect People From Coronavirus. Then Someone Wandered Out.