Home » Americas » Robina Asti, Who Made History on the Ground and in the Air, Dies at 99

Robina Asti, a World War II veteran and mutual-fund executive who inspired a generation of transgender people in the 2010s with her successful fight for her husband’s Social Security benefits, and who just last year became the world’s oldest active flight instructor, died on March 12 at the home of her daughter Coca Astey in San Diego. She was 99.

Her death was confirmed by Ms. Astey.

Ms. Asti had been living quietly as a woman for nearly 40 years when she applied for survivor benefits from the Social Security Administration in 2012, a few months after her husband died. It took a year for the agency to deny her application, on the grounds that she was not legally a woman at the time of her marriage.

Though most of her government-issued documents, including her pilot’s license and even her Social Security card, recognized her as a woman, the agency’s determination of survivor benefits was based on her birth certificate, which identified her as a man.

Ms. Asti was livid. She searched online for help and found Lambda Legal, a nonprofit law firm the specializes in lesbian, gay, bisexual and transgender rights.

“It was an amazing day when she walked into our offices,” M. Dru Levasseur, who ran Lambda’s transgender rights practice at the time and now works for the National LGBT Bar Association and Foundation, said in a phone interview. “We could feel her energy, her anger at the system.”

Lambda took the government to court in June 2013. Eight months later, on Valentine’s Day 2014, Ms. Asti checked her bank account and found a large deposit: nearly two years of back pay from the Social Security Administration.

Not only did Ms. Asti win her case; the administration changed its rule regarding transgender survivors — and the documentation requirements for proving one’s gender in the first place. 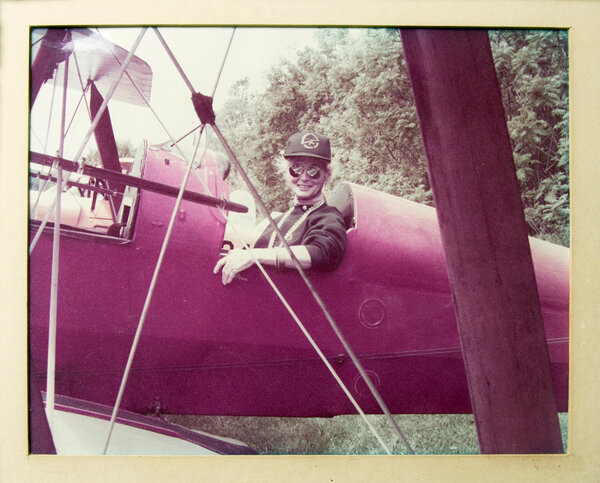 Ms. Asti’s fight made her a celebrity in the L.G.B.T.Q. community, at a time when transgender rights were just beginning to be a national issue. She embraced her newfound role — giving speeches, marching in pride parades and simply living a full life as an older transgender woman. In November 2020, Out magazine named her to its annual “Out 100” list.

“Her telling her story had a huge impact for the transgender community,” Mr. Levasseur said. “Because of violence against transgender people, many of us don’t get to grow old, but here she was, enjoying her life in her 90s.”

Ms. Asti’s greatest enjoyment came in the air. A licensed pilot and instructor since her 20s, she continued to fly every weekend well into her 90s, traveling from her home on the Upper East Side of Manhattan to Teterboro Airport in northern New Jersey.

At the beginning of the pandemic she moved from New York, where she had lived most of her life, to San Diego, where her daughter lives. She took her last flight, with a student, in July, establishing a Guinness World Record as the world’s oldest active pilot and oldest flight instructor.

Robina Fedora Asti was born on April 7, 1921, in Manhattan and raised in Greenwich Village. Her father, David Astey, was a featherweight boxer who had Anglicized his surname after his manager said he needed to sound less Italian. Ms. Asti began using the original spelling after she transitioned. Her mother, Helen (Jund) Astey, was a homemaker.

Along with her daughter Coca, Ms. Asti is survived by another daughter, Eamonn Gunther; a son, Trevor Astey; and five grandchildren. Another son, Pepe, died in childhood.

Ms. Asti showed an interest in electrical devices from an early age. By the time she was a teenager, she had a steady business fixing radios around her Greenwich Village neighborhood.

She attended Brooklyn Technical High School but dropped out at 17 to join the Navy. Her training in electrical engineering took her to Wake Island, a military outpost in the Pacific Ocean, where she installed radios in naval aircraft, a priority as war with Japan loomed.

Ms. Asti served throughout World War II and was discharged as a lieutenant commander after the war ended. She returned to New York, where she and three of her Navy pals opened a supper club in White Plains, north of New York City.

But she soon grew tired of the restaurant business. She sold her stake and took a job with E.W. Axe, a mutual fund company operated out of the Carrollcliffe mansion, a Romanesque castle overlooking the Hudson River in Tarrytown, N.Y. She married Evangelina Diaz-Perez in 1958.

Ms. Asti began to transition in the mid-1970s, at a time when transgender people were poorly understood, even in New York City. She would dress as a man at work, then come home and change into women’s clothing. Eventually the pressure of leading multiple lives got to be too much; she quit her job, came out as a woman and amicably divorced Ms. Diaz-Perez.

To more fully inhabit her new gender expression, she took a series of jobs viewed as typically female: For several years she worked as a makeup artist at Bloomingdale’s, a housekeeper and an off-the-books hairdresser. She also began trading stocks, and she eventually earned enough money to make that her full-time source of income.

In 1980 she met Norwood Patton, an artist, at a bar on the Upper East Side. They married in 2004 in an airplane hangar at the Orange County Airport in upstate New York. He died in 2012.

By her own account, Ms. Asti was no activist. She lived largely outside the movement for L.G.B.T.Q. rights of the 1980s and ’90s, despite its significant presence in New York City. But she took a stand when it was necessary.

Soon after her transition, her doctor told her that as part of her application to renew her pilot’s license, he had to give her an internal physical exam, as required by the Federal Aviation Administration. She found the requirement invasive and demeaning. With the help of the Ninety-Nines, an organization for female pilots, she petitioned the government to change its rule — which it promptly did.

After her husband died, Ms. Asti grew especially close to one of her grandsons, Erik Hummel, who lived with her for six years after he graduated from the University of Pennsylvania. She became something of a den mother to his friends, fixing them Sunday dinner and regaling them with stories about growing up during the Great Depression or fighting in World War II.

In 2019 she and her grandson founded the Cloud Dancers Foundation, which provides assistance and awareness for older transgender people.

“She would say that she had been through a depression, through a world war, and that she had learned to just keep living,” Erik Hummel said. “She wanted to remind other transgender people who feel alone that there are people who care about them.”

Cloud Dancer is a nickname for an acrobatically inclined pilot, and Ms. Asti seemed to see a strong connection between flying and living as a transgender person.

“One of the unique things about flying,” she said in 2018, “is that you’ve got to be able to move from one position to another, because you can’t accept where you are.”