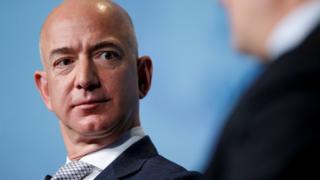 Gavin de Becker was hired by Mr Bezos to find out how his private messages had been leaked to the National Enquirer tabloid.

Mr de Becker linked the hack to the Washington Post’s coverage of the murder of Saudi writer Jamal Khashoggi at the Saudi consulate in Istanbul.

Saudi Arabia has not yet commented on the allegation.

Mr de Becker said he had handed his findings over to US federal officials.

“Our investigators and several experts concluded with high confidence that the Saudis had access to Bezos’ phone, and gained private information,” he wrote on the Daily Beast website.

Mr de Becker’s findings come after Mr Bezos in February accused the National Enquirer’s parent company American Media Inc (AMI) of blackmail, saying it had threatened to publish his intimate photos unless he said that the tabloid’s reporting was not politically motivated.

Mr de Becker said that AMI had also demanded that he say his investigation had concluded that AMI had not relied upon “any form of electronic eavesdropping or hacking in their newsgathering process”.

He alleged that the Saudi government had targeted the Washington Post – for which Mr Khashoggi had been writing.

“Some Americans will be surprised to learn that the Saudi government has been very intent on harming Jeff Bezos since last October, when the Post began its relentless coverage of Khashoggi’s murder,” Mr de Becker said.

“It’s clear that MBS considers the Washington Post to be a major enemy,” he added, referring to Saudi Crown Prince Mohammed bin Salman.

US officials have said that Mr Khashoggi’s murder would have needed Prince Mohammed’s approval, but Saudi Arabia has denied that he was involved.

The Saudi embassy in Washington has not responded to a request for comment on Mr de Becker’s allegation, Reuters reported.

In February, the Saudi minister of state for foreign affairs said Saudi Arabia had “absolutely nothing to do” with the National Enquirer’s reporting on Mr Bezos’ affair.

AMI has not yet commented on Mr de Becker’s allegations. The company has previously said that it acted lawfully in its reporting of Mr Bezos’ personal life.