Among the thousands of commuters traveling through Pennsylvania Station late last month was Kurt Salzinger, a native of Austria who fled the country as the Nazis marched in. He distinguished himself years later in the United States as a scholar in the field of behavioral psychology.

Dr. Salzinger, 89, and his wife were on their way to Macy’s Herald Square on Oct. 27, when a hurried straphanger rushed past them on a subway platform in Penn Station, the police said. The man shoved the couple out of his path with an arm that knocked them both to the ground, Mr. Salzinger’s family and the police said, before disappearing on a southbound 3 train headed to Brooklyn.

Strangers rushed to help Dr. Salzinger, who was lying helpless on the platform. He was hospitalized with bleeding of the brain from the fall, and later contracted pneumonia, his relatives said. He died on Thursday.

The police and Mr. Salzinger’s family believe his death was an accident, but they are awaiting an official determination from the medical examiner. The encounter was not captured on video, and the police have not yet located the straphanger to interview.

Dr. Salzinger’s death was a tragic end to the everyday jostle of straphangers who often move about the city elbow to elbow. But his family said the collision shows a need for more care as people rush to and fro in the subway.

“It just shows a complete disregard for the elderly,” Mara Chitayat, Dr. Salzinger’s stepdaughter, said on Sunday at his memorial service on the Upper West Side.

More than 100 people attended the service at Riverside Memorial Chapel, where his colleagues and loved ones recalled his sly wit, his passion for his work and his dedication to his wife and children. He leaves behind his wife, Dr. Deanna Chitayat, 85, six children and stepchildren, and four grandchildren.

Mr. Salzinger was born in Vienna in 1929. As the Nazis marched into the country in 1938, he escaped with his father, mother and older brother, through an underground Jewish network, Mara Chitayat said. During a two-and-a-half-year journey, they traveled on the Trans-Siberian Railway to Japan, then took a boat to Seattle before finally settling in New York.

During the journey, Dr. Salzinger never felt afraid, he told his children, because he trusted his father would protect him. 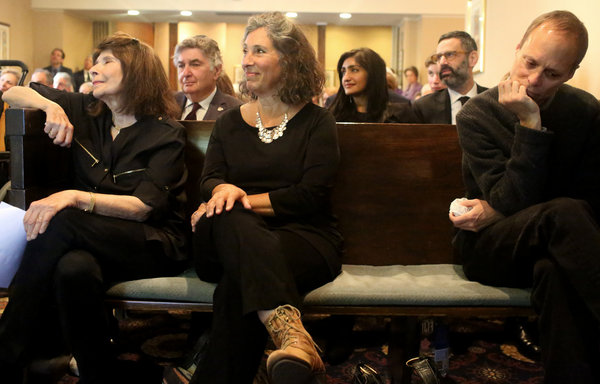 “That security that he had, he passed on to us, and it allowed him to do amazing things,” his oldest daughter, Leslie Salzinger, said.

The loved ones Dr. Salzinger’s family left behind all died in the Holocaust, and the ordeal made him an anxious traveler, relatives said. But it also instilled in him a sense of obligation to stand up for what he believed was right, and that included speaking out against the rise of far-right politics in the United States and corporate dominance of American life.

“He felt that there were some parallels to what was happening today and he was very angry about it — that it was reminiscent of the rise of fascism,” Mara Chitayat said.

He married Dr. Chitayat 38 years ago, and they were inseparable, their children said. They traveled together every day to Hofstra University, where they both worked as professors, said his stepdaughter Aimee Chitayat. When his wife had a bout with cancer, he took a semester off to help out.

“He was my mother’s right arm and she was his,” Aimee Chitayat said.

Their children recalled weekends on Fire Island, where Dr. Salzinger often spent his time trying to train toadfish, rather than frolicking on the beach. Or he could be found writing books and speeches on animal and human behavior, including schizophrenia.

Over his career, Dr. Salzinger wrote or co-wrote 14 books and more than 120 research articles and book chapters, according to a remembrance from Hofstra University, where he worked for 19 years until 2001 and was a professor emeritus. He also taught at Columbia University and City College, and was the former director for science of the American Psychological Association.

He peppered his work with literary references, and often infused them with humor, said Dr. Mark Serper, a psychology professor at Hofstra who co-wrote a book with Dr. Salzinger that was published in 2009.

“The world has lost another giant among scholars, a singular intellect, a voice of reason and a mensch,” he said.

A few days into his hospital stay, Dr. Salzinger suddenly woke up and drew his wife close, reminding her of how they met, his children said. He spoke for about an hour, and even then, found humor.

“Hey, what are you doing down there?” Meryl Salzinger, his daughter, recalled him asking as a nurse adjusted his bed linens. When she assured him that the nurse was not trying to take a peek, he responded, “I just don’t want her to be disappointed.”

The room erupted in laughter.

“We cracked up and he sat back with a satisfied smile,” she said.

“It was a testament to his magic that in the middle of the night, he could turn that drab hospital room into a joyous space.”