It’s Tuesday. We’ll look at how the city’s school system fared on the first day of an employee vaccine mandate. And, libraries across the city have dropped fines for overdue books. 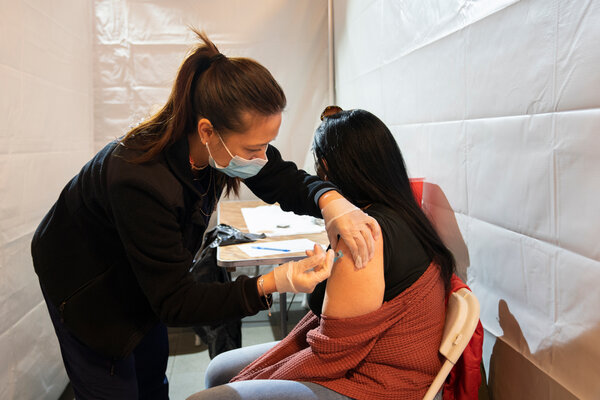 Three weeks into the school year, it is too early to tell whether the city can keep students as safe as it did last year, when far fewer children were in classrooms. But it became clear on Monday that the vaccination requirement for employees in the city’s school system had prompted thousands of school workers to get a first shot — particularly those who had put it off like a five-paragraph essay.

Of the Department of Education’s 150,000 employees, 1 in 12 got a shot in the last 10 days. About 28 percent of the school work force, or about 43,000 people, has received at least one dose of a coronavirus vaccine since the mandate was announced in August. Overall, 99 percent of principals, 96 percent of teachers and 94 percent of noneducational staff members have received at least their first shot.

But officials said that 8,000 school employees had refused to be vaccinated and had been placed on unpaid leave.

The employee mandate for the schools followed a state effort to require more than 650,000 hospital and nursing home workers to get vaccinated. That directive took effect last week, prompting a last-minute rush for shots. As my colleague Daniel Slotnik reported, Northwell Health, the state’s largest health care provider, announced on Monday that it had fired 1,400 employees who had refused to get vaccinated.

The school vaccination requirement was a test for Mayor Bill de Blasio that could prefigure a broader vaccination push for other segments of the municipal work force. He has proudly cited the city’s record in keeping school buildings open during most of the last academic year, when other districts switched to all-remote instruction. He dropped a remote option for this year.

Last week, he increased coronavirus testing in schools and relaxed quarantine rules, changes intended to ease the disruptions that came with frequent classroom closings during the first week of school last month. Unvaccinated students are now being tested weekly.

My colleague Eliza Shapiro, who covers education in New York, writes that some schools will probably have to cope with staff shortages this week unless teachers who remain unvaccinated get their first shots, as Meisha Porter, the schools chancellor, urged them to. “It’s never too late,” she said. “You are more than welcome to come back to work. Our students need you.”

Still, in the coming days or weeks, substitute teachers may make up a sizable portion of the faculty in some schools. And some schools may have to drop hot lunches in favor of grab-and-go fare because about 500 cafeteria workers remain unvaccinated, as do 800 school safety agents.

Some of the holdouts were skeptical of the vaccines and had delayed making plans to be vaccinated, hoping that the mandate would fail in court. But unions representing school employees lost their bid to block it. A separate legal challenge from a group of teachers will be heard by a federal appeals court next week. Justice Sonia Sotomayor denied the teachers’ petition for the Supreme Court to take up the case, making the Monday deadline for vaccinations inescapable.

So far, among the city’s one million students only 2,358 coronavirus cases have been reported, with an additional 943 cases among staff members.

Heads up, New York: There’s a chance of showers in the early half of the day, with temps in the high 60s dropping to around 60 in the mostly cloudy evening.

Eric Adams is heavily favored to become the next mayor of New York City. And he has roughly $7.7 million to promote his message and to signal strength.

Pvt. Danny Chen killed himself at 19 after being hazed by fellow soldiers in Afghanistan. Ten years later, he was remembered on a tour of Manhattan’s Chinatown, where he was born and raised.

Acquitted of murder in the death of a woman with schizophrenia, Sgt. Hugh Barry is being brought up on disciplinary charges in a long-delayed hearing.

God’s Love We Deliver, a meal delivery organization, will be the first tenant in an old health clinic in the West Village.

Overdue fines became a thing of the past in New York City’s three public library systems this morning.

But you are not off the hook if you lost something that you borrowed. The three systems have not rescinded their replacement fees, which are charged when items are considered lost, or one to three months overdue, depending on the library — though they will waive a replacement fee if you bring back a long-overdue item.

If you have run up fines totaling $15 or more, your library card will no longer be blocked. The three systems said there were more than 400,000 people with that much or more on their cards. But too much in replacement fees will keep you from borrowing library materials such as books, magazines or DVDs.

Officials of the three systems — the Brooklyn Public Library; the New York Public Library, which runs the libraries in Manhattan, the Bronx and on Staten Island; and the Queens Public Library — said that fines no longer served to bring back books and other materials.

The officials also said that eliminating the fines would help to equalize access to libraries. “For those who can’t afford the fines — disproportionately low-income New Yorkers — they become a real barrier to access that we can no longer accept,” said Anthony W. Marx, the president of the New York Public Library.

The State of Vaccine Mandates in the U.S.

Mueller to testify at hearings with high stakes for Trump, Democrats

California Is Trying to Prevent Fires. No One Expected a Smoking Garbage Truck.