The former president, who lives in Mr. Maloney’s district, is backing the incumbent over a challenger from the left, State Senator Alessandra Biaggi. 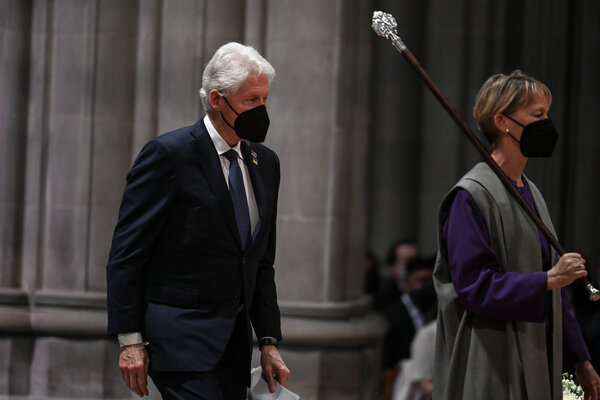 Former President Bill Clinton waded into one of New York’s most contentious Democratic primaries on Wednesday, saying that he would cast his vote for Representative Sean Patrick Maloney in a newly redrawn suburban district that includes his Chappaqua home and “urge all my neighbors to do the same.”

“The stakes in this election are sky high,” Mr. Clinton said in a statement shared with The New York Times, citing Republican ambitions to retake the House this fall. “Sean has proved he can win tough elections and build coalitions to get things done for our communities and continue our progress.”

Mr. Clinton is the latest fixture of the national and local Democratic establishments to line up behind Mr. Maloney, the chairman of the powerful Democratic Congressional Campaign Committee, as he works feverishly to stave off a potentially embarrassing defeat to Alessandra Biaggi, a progressive state senator, in the Aug. 23 primary.

The former president’s endorsement may come with added influence, given his standing in the Westchester County suburbs where he has lived since leaving office and his usual reticence to weigh in on primary contests.

Hillary Clinton — the former first lady, senator from New York and Democratic presidential nominee — did not join in the endorsement, though she did march with Mr. Maloney at a Chappaqua Memorial Day parade earlier this year.

Ms. Biaggi served as the deputy national operations director for Mrs. Clinton’s 2016 presidential campaign, where Ms. Biaggi began dating her future husband. When the couple got married in 2019, Mrs. Clinton led them in their vows.

A spokesman for Mrs. Clinton did not respond to a request for comment.

The contest is shaping up to be a bitter proxy fight between the party’s more moderate leadership and its restive left flank, complete with personal insults and national implications in the fight for the House.

It began in May, when a New York court scrambled the state’s congressional district lines, cutting Mr. Maloney’s district in two. Rather than run for re-election in his current seat, he chose to shift to a slightly safer neighboring district where he lives, much of which is now represented by a progressive Black first-term congressman.

The freshman, Representative Mondaire Jones, ultimately chose to move 20 miles south to run for an open seat in New York City rather than face off against an entrenched colleague. But Democrats in New York and Washington were furious at Mr. Maloney, contending that he had put his own interests ahead of his leadership role protecting the party’s House majority.

Ms. Biaggi, 36, entered the race in May citing the same grievances, and her campaign has been boosted by prominent progressives, including Representative Alexandria Ocasio-Cortez. She entered the State Senate by toppling a more established foe, but has never represented any portion of the new district.

Mr. Maloney, 56, worked on Mr. Clinton’s 1992 and 1996 presidential campaigns and later served as the White House staff secretary, an influential behind-the-scenes position responsible for the flow of paperwork around the president. The former president backed his first run for Congress in 2012.

In his own comment, Mr. Maloney tied himself to Mr. Clinton’s distinctive brand of politics, saying he was “proud to continue President Clinton’s legacy of putting people first.” The congressman, who entered office as more of a centrist, has shifted left in recent years.

ISIS has as much as $300 million to fight, says UN chief