Home » Americas » Seeing Ourselves in Bloom

Cristina Martinez paints women as if they are flowers. In her brightly hued renderings, their heads loom and droop over their bodies, like blooms too heavy for their stems. Often, they are dressed in vibrant gowns with flecks of paint to mimic sequins; the color of their skin, a moist terra cotta, similar in shades to the Black and brown women who raised the artist.

Like many other artists, Ms. Martinez has met the coronavirus pandemic and waves of social unrest this year as best she knows how: by taking all the vulnerability the moment has exposed and putting it on canvas. And she has a very specific goal: to illuminate the experience of hyphenated American womanhood.

Wanted to take a break from painting because all I’ve been doing is painting and ended up clearing my mind by making another painting ? 27 x 19 acrylic and pastel on paper. Original available – no prints.

In other words, Ms. Martinez, who is Black and Mexican-American, hopes that her images of women — with varying shades of Black and brown skin, representing an endless layering of identities and cultures — will make her viewers, who include over 100,000 followers on Instagram, feel seen. Or, become more aware of the lives of such women around them.

“I know what it’s like to feel like I’m not Mexican enough for my Mexican side or Black enough for Black people but I won’t choose,” Ms. Martinez said.

Hyphenated American life has been historically maligned in United States. In 1915, during the end of a wave of immigration that brought 15 million people to the country, the former president Theodore Roosevelt said in a speech that there was “no room in this country for hyphenated Americans,” because mixed identities indicated dangerous allegiance to foreign soil. (The president at the time, Woodrow Wilson, agreed, saying in 1919 that “any man who carries a hyphen about with him carries a dagger that he is ready to plunge into the vitals of this Republic.”)

In 2015, Bobby Jindal, then the governor of Louisiana and a presidential candidate, echoed the same sentiment in a television ad implicitly criticizing immigrants, saying, “I’m tired of hyphenated Americans.”

But most Americans, by default, are hyphenated Americans. Those that are unable to conceal their otherness are reminded of it every day. Ms. Martinez wants her art to embrace that reality. 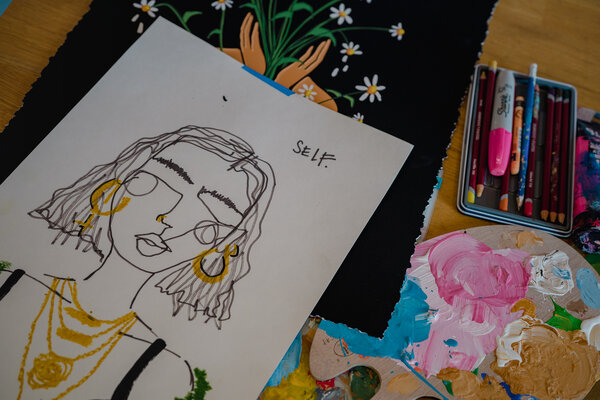 She is part of a wave of Latin artists that are using their diversity to create art informed by the current state of affairs, said Gabriela Urtiaga, the chief curator at the Museum of Latin American Art in Long Beach, Calif.

“Art is necessary in order to create a diverse society and Cristina represents that necessity,” Ms. Urtiaga said. “The power of her work is in the language that she uses combining the roots of abstract work but also muralist art with a mix of youth and design.”

As an art school dropout, Ms. Martinez has found a receptive and excited audience through social media. “What I love about Instagram is that I can have this very intimate moment with my art work,” she said. But “when I decide to I can share it with the world, I instantly read the way that it makes them feel.”

Her popularity on social media has led to projects with major brands including Vaseline and Nike. She has created art for the singers Ciara, H.E.R. and Jojo. And she has been prolific during the pandemic: In the thick of quarantine, Ms. Martinez made 15 paintings from her Seattle studio.

After George Floyd was killed in police custody, Ms. Martinez raised $20,000 for the Black Lives Matter movement by selling a print she made called “BLM Keep Blossoming,” which was meant to serve as a reminder for “Black and brown people to keep blooming,” as she put it in her Instagram caption of the print.

This past summer, she painted a mural on the 79th floor of 3 World Trade Center, of women with various complexions, heights and hair textures, in front of a dark periwinkle blue background. Their necks are held up by Kelly green flower stems.

In an interview, Ms. Martinez said that the crises that have enveloped the country over the last six months have pushed her to reflect, especially on the way the crises have overlapped for hyphenated Americans.

The coronavirus pandemic has disproportionately affected the 60 million Hispanics and Latinos who live in the United States, according to a report by McKinsey & Company. Hispanics and Latinos are three times more likely than white people to contract Covid-19, but encounter more hurdles when seeking care, and they have experienced the highest unemployment rate, compared with African-Americans and white people, during the pandemic.

“It definitely influences my work in a way where I do everything that I can,” Ms. Martinez said. “My mission is to tell the stories of Black and brown people that have to fight to be seen and heard,” she said, adding that she has seen that on both sides of her family.

As her audience has grown, Ms. Martinez has also sold more art to a lot more white people, she said. And that makes her quest to create art about and for Black and brown people even more pertinent.

Having a white audience, “lets me know that even if you can’t relate to the stories I am telling, there is a level of compassion or wanting to understand,” Ms. Martinez said. “That is my contribution. I can’t change the world, but I can start change through my work.”