Addressing a medical worker shortage, new bill would provide visas for 40,000 foreign doctors and nurses to come to US. 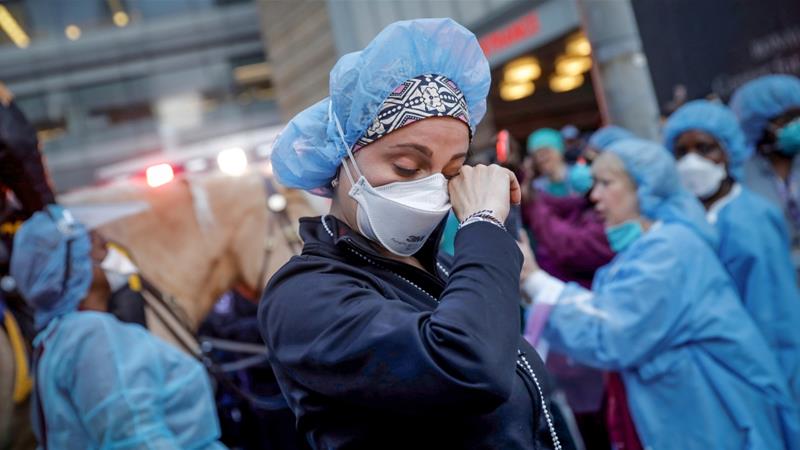 A bipartisan group of Senators in the United States has introduced legislation in Congress that would allow 40,000 immigrant doctors and nurses to gain visas and work permits and join the fight against the COVID-19 pandemic.

“Immigrant nurses and doctors play a vital role in our healthcare system, especially in medically underserved areas of our country,” Senator Dick Durbin, a Democrat, said when announcing the bill.

One-sixth of the US medical workforce is foreign-born, and there are currently thousands of nurses stuck overseas due to green card backlogs and bureaucratic delays, the senators said. Many of these healthcare workers have already been approved to come to the US as lawful permanent residents.

“This proposal would simply reallocate a limited number of unused visas from prior years for doctors and nurses who are qualified to help in our fight against COVID-19,” said Senator David Purdue, a Republican.

“This shortage is critical and needs immediate attention so that our healthcare facilities are not overwhelmed in this crisis,” Purdue said.

By mid-April, more than 9,000 US healthcare workers had contracted COVID-19 and more than 27 had died, according to preliminary data released by the US Centers for Disease Control and Prevention.

Authorities in hard-hit states like New York have called for volunteers from the ranks of retired nurses and doctors in other states to help fill the need. Nationwide, estimates of the shortage of doctors in the US now range from 29,000 to 43,000, according to the Association of American Medical Colleges.

Meanwhile, thousands of doctors who are currently working in the US on temporary visas with approved immigrant petitions are waiting for their permanent work permits, the senators said in a statement.

The bill could be attached to any new round of COVID-19 rescue legislation Congress will consider.

Medical professionals receiving consideration under the bill would be required to meet licensing requirements, pay filing fees, and clear national security and criminal background checks, according to the senators.

It is unclear whether thousands of foreign nationals trained as doctors who are presently in the US but who are not working now because they have not yet completed their residency requirements would be able to qualify under the bill’s terms.

Employers would be required to attest that the immigrant medical professionals being hired do not displace US workers.