Home » Americas » She Never Saw Herself in Children’s TV Shows. So She Created Her Own.

For Chris Nee, the producer behind the popular “Doc McStuffins” series, diversity and representation aren’t nice-to-haves. They’re the things she wished TV producers considered when she was a kid. 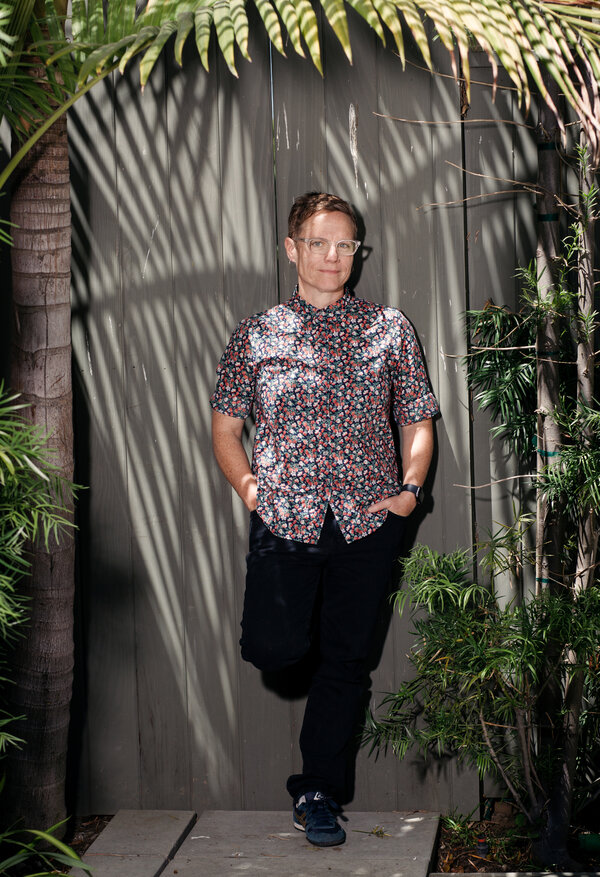 “I am writing to my own experience as a kid.”

In early June, Chris Nee, the award-winning children’s show writer and producer, found herself at a loss for words. She could not name a single TV show from her childhood that had left a lasting impression on her.

“Maybe ‘Quincy’…?” she said in a recent interview over Zoom from her house in the Venice Beach neighborhood of Los Angeles. Her face scrunched up with a mix of confusion, bewilderment and disappointment as she tried to recall another show — any show — from the late ’70s and early ’80s. “I was not growing up in a great era of TV,” she concluded.

It is, of course, not lost on Ms. Nee that part of the reason she — a gay “relatively butch” woman, as she put it — didn’t connect with any shows was because she never saw herself represented onscreen. She simply wasn’t like the little girls that TV glorified back then. Ms. Nee felt uncomfortable in a dress and in social situations, feeling early on that she was “different.”

Ms. Nee came out as gay when she turned 18 in the ’80s — a time when being openly gay was an incredibly heavy burden to carry. The AIDS epidemic, still little undersood at that point, was exploding around the country, killing hundreds of thousands of L.G.B.T.Q. people. The Reagan administration treated the epidemic as a laughing matter, publicly making jokes about the disease and further marginalizing L.G.B.T.Q. people who watched friends and loved ones die. And, in the broader context, there were few pop culture and entertainment icons who were openly gay; even Elton John only publicly revealed that he was gay in 1992.

“It was just a really different space,” Ms. Nee said, of that time. “And I carry that stuff with me. I can still touch those feelings of hurt and anxiety and fear.”

In large part, Ms. Nee’s artistry has been capturing that not-fitting-in-ness in the heart of her stories; stories that touch on the idea of difference as the very “thing that can give us great strength.”

“I always say that the answer you’re supposed to give when you’re asked ‘who are you writing for?’ isn’t kids,” she said. “I am really not writing for the kids, I am writing to my own experience as a kid.”

“We Are Doc McStuffins”

In 2012, Disney released “Doc McStuffins,” an animated children’s show pitched and produced by Ms. Nee. The lead character is a 7-year-old Black girl, Doc, who dreams of becoming a doctor, like her mom, and spends her days carrying around a “Big Book of Boo Boos” and tending to her toys that fall sick. It was also the first Disney show to air an episode featuring an interracial lesbian couple. 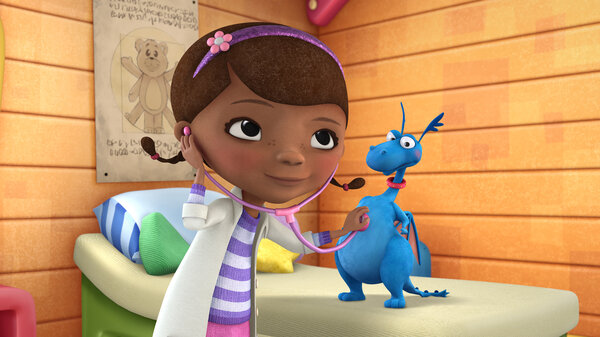 “Doc McStuffins” quickly became one of the most popular children’s TV shows, running for five seasons and viewed by millions of children, age 2 to 5. In fact, in 2016, the first episode of Season 4 reached more than four million children, according to the book “Heroes, Heroines and Everything in Between: Challenging Gender and Sexuality Stereotypes in Children’s Entertainment Media.” The show was nominated for several Daytime Emmy Awards and, in 2014, it won a Peabody Award for children’s programming.

Most importantly, the show helped shift perceptions of Black medical professionals, spurring thousands of female physicians to post pictures of themselves on social media with the caption “We are Doc McStuffins.” In a recent tweet, Dr. Rachel Buckle-Rashid, a pediatrician in Rhode Island, posted that a little girl had just jumped into her arms assuming she was “Doc.” “Maybe Disney Junior has done more for me as a Black woman in medicine than most D.E.I. initiatives,” Dr. Buckle-Rashid added.

In a 2018 survey by the Geena Davis Institute, a research organization focused on representation in film and TV, more than 50 percent of over 900 girls in school and college named “Doc McStuffins” as the show that left enough of a lasting impression on them to pursue a career in STEM.

Interestingly, Ms. Nee noted that boys were watching the show, too, pointing to data from the time indicating that they made up about 49 percent of “Doc” viewers, which exposed them to ideas of more empowered girls as well.

Ms. Nee originally wanted to be an actor. But with her shaved head and baggy T-shirts — “I was deeply queer in the old school sense, which was actually hard-core punk rock,” she explained — she didn’t know who would cast her or how she could fit in. Instead, she decided then to get into production, taking on a role as an associate producer with Sesame Street’s international arm, which took her from Jordan to Mexico to Finland. It was, as she described it, “the coolest job in the world.”

She eventually realized, though, that her greatest strength was writing. She began working on scripts for shows like “Blue’s Clues” and “Wonder Pets,” even as she continued to work as a producer (TV production was and, in large part, still is a freelance-driven business). At one point she was producing “Deadliest Catch,” a reality TV show about Alaskan king crab fishermen, during the day and writing children’s TV shows at night.

“The first Christmas special of the ‘Wonder Pets’ was written from the barracks on the islands of Unalaska,” she said.

The idea for “Doc McStuffins” came to Ms. Nee in the shower one morning. Just a few days prior, her family had rushed to the hospital in an ambulance because her son, 2 years old at the time, was dealing with severe asthma. It was one of many trips in and out of the doctor’s office and the emergency room that they would make. “It was all so brand-new for him,” she said. “And I was like, why hasn’t somebody done something to make this less scary for kids?”

When she took the concept to Disney, the company said yes almost immediately.

“It was one of those times where you said to yourself ‘Oh, why didn’t I think of that?’” said Nancy Kanter, who at the time was the creative head of Disney Junior. “The idea was simple and brilliant.”

Ms. Kanter had just one suggestion for Ms. Nee: Instead of making Doc a little white girl, why not make her a little Black girl?

There was early pushback and hesitancy from the business side of Disney that a female lead might not have mass appeal. The prevailing wisdom at the time of the perfectly bifurcated pink and blue worlds of children’s TV was that a girl would watch an action-packed “boy’s show” but a boy wouldn’t watch a “girl’s show”. There was also a concern that a Black lead, rather than a white lead, might not sell as much merchandise, one of the biggest revenue drivers for children’s entertainment.

But Ms. Kanter was undeterred. “I said, ‘You may be right but we’re not going to change it,’” she recalled. “I was willing to stick my neck out.”

In the end, both of the business-side assumptions proved false. The show inspired so many little girls of all races to dress up in lab coats and carry their own stethoscopes that within a year, “Doc McStuffins” merchandise generated about $500 million in sales, making it one of the top-selling toy products featuring a nonwhite character. And Ms. Nee added that girls and boys were tuning in in almost equal numbers. “Rules are rules until somebody breaks them,” she said.

Since the release of “Doc McStuffins” in 2012, children’s TV shows have hit a milestone that Hollywood and the broader entertainment industry have not yet crossed: 52 percent of children’s TV shows now feature female leads, according to a 2019 analysis by the Geena Davis Institute. Compare this with the top 100 Hollywood movies of 2018, where women held 39 percent of leading roles. And, the analysis found, female characters in children’s shows are now more likely than male characters to be depicted as leaders, which wasn’t the case for the top Hollywood movies.

In the coming weeks, Netflix will begin streaming two of Ms. Nee’s latest shows. “We the People,” to be released on July 4, is a series of animated civics lessons created in collaboration with Higher Ground Productions, the company run by the Obama family. And “Ridley Jones,” set to be released on July 13, is the tale of 6-year-old Ridley who lives at the natural history museum that her mom manages.

In the first episode of “Ridley Jones,” Ridley discovers that at night the creatures in the museum come to life. That’s when she meets Fred the Bison.

“Is Fred a he or a she?” she asks one of her new friends.

“Cool,” Ridley says, and off she jets on a mission to rescue a necklace.

In another episode, Ridley and her gang have to attend a ball at the museum, but they find out that Fred doesn’t want to go because they didn’t feel comfortable wearing the dresses they’ve always worn.

By the end of the episode, all is resolved: Fred ends up attending the ball in a blue suit. And Fred’s blue suit just happens to resemble a blue suit Ms. Nee used to love wearing when she was a kid.

Attacks Against Asian New Yorkers: What to Know

Amazon driver died in bathroom sheltering from tornado with colleagues

Stress hinders ability to plan ahead by disrupting decisions based on memory: Research