Home » Americas » She Stopped to Help Migrants on a Texas Highway. Moments Later, She Was Detained.

MCALLEN, Tex. — Teresa L. Todd pulled over one recent night on a dark West Texas highway to help three young Central American migrants who had flagged her down. Ms. Todd — an elected official, government lawyer and single mother in a desert border region near Big Bend National Park — said she went into “total mom mode” when she saw the three siblings, one of whom appeared to be very ill.

Struggling to communicate using her broken Spanish, Ms. Todd told the three young people to get out of the cold and into her car. She was phoning and texting friends for help when a sheriff’s deputy drove up, followed soon by the Border Patrol. “They asked me to step behind my car, and the supervisor came and started Mirandizing me,” said Ms. Todd, referring to being read her Miranda rights. “And then he says that I could be found guilty of transporting illegal aliens, and I’m, like, ‘What are you talking about?”

Ms. Todd spent 45 minutes in a holding cell that night. Federal agents obtained a search warrant to examine her phone, and she became the focus of an investigation that could lead to federal criminal charges.

As the Trump administration moves on multiple fronts to shut down illegal border crossings, it has also stepped up punitive measures targeting private citizens who provide compassionate help to migrants — “good Samaritan” aid that is often intended to save lives along a border that runs through hundreds of miles of remote terrain that can be brutally unforgiving.

Earlier this year, federal agents raided the home of a volunteer who provides meals, housing and other aid to migrants in the Texas border city of Brownsville. In Arizona, four volunteers with No More Deaths, a nonprofit based in Tucson, were convicted on misdemeanor criminal charges after leaving water and canned food for migrants hiking through the Cabeza Prieta National Wildlife Refuge. Five other volunteers also faced charges, including one felony case now pending in Federal District Court in Tucson.

“I honestly don’t feel like I ever did anything wrong: I stopped to help some kids,” said Ms. Todd, 53, who serves as both the city attorney of Marfa, Tex., and the county attorney of Jeff Davis County, an elected position. “It’s been pretty transformative for me, to be perfectly honest. To have devoted my life to public service, and then to be Mirandized, detained and investigated as if I’m a human smuggler. The whole thing was really, really, very surreal. It was like a ‘Twilight Zone.’”

Federal agents at the border in some cases work closely with nonprofit shelters and volunteers to coordinate housing and transportation logistics for migrants in border cities who have recently been released from Border Patrol custody. But often, volunteers who aid illegal border crossers before they are in custody are treated far differently.

For Ms. Todd, it started at about 10 p.m. on Feb. 27, just outside the funky desert community of Marfa. Ms. Todd was busy that night: She had attended a planning and zoning meeting at Marfa City Hall, had a late dinner at the Hotel Saint George and was driving back home to nearby Fort Davis. Suddenly, a young man in a white shirt ran out of a ditch and started waving at her.

He was a bit older than a teenager, she learned, as he and his siblings started telling her what had happened.

They were originally from El Salvador — Carlos, 22, his brother, Francisco, 20, and their sister, Esmeralda, 18. They had fled their home country years ago and were living with an aunt in Guatemala. Worsening gang violence forced them to leave — two of Carlos’s friends were murdered, and a gang leader wanted Esmeralda to be his girlfriend, according to court documents. The trio headed for the United States and crossed the border in a remote stretch of desert with a group of migrants and smugglers. But Esmeralda became sick and had trouble keeping up.

The others in the group pushed ahead, but her brothers stayed by her side. The three of them became lost as they hiked north, and they ran out of food and water, according to statements they provided to the federal public defender’s office. Esmeralda’s condition had worsened by the time they flagged down Ms. Todd. 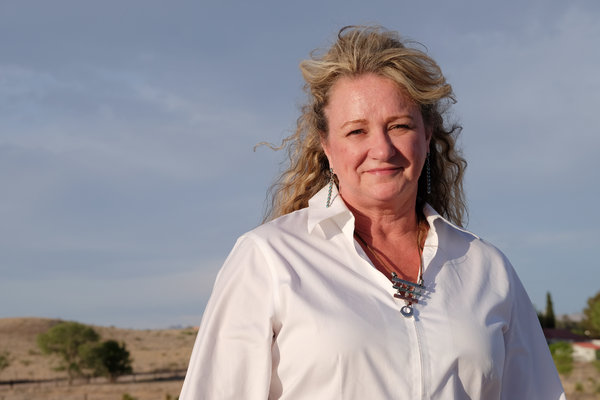 She had the siblings get in her car and started to contact friends — one who works for a refugee services nonprofit and another who is a lawyer for the Border Patrol.

Moments later, a sheriff’s deputy from neighboring Presidio County pulled up behind her, lights flashing. The deputy and Ms. Todd know one another, but he was immediately suspicious, she said, asking whether she thought the migrants’ backpacks smelled like dope. The deputy alerted Border Patrol, whose agents read Ms. Todd her rights.

Ms. Todd, who routinely puts misdemeanor lawbreakers behind bars as a county attorney, was put in a holding cell at a nearby Border Patrol station. Her purse and other personal items were confiscated.

“I walk in and a guy says, ‘Are you the driver?’ I said, ‘No, I’m the lady who stopped to help these kids,’” Ms. Todd said. “They seemed to think there was something very nefarious going on, when I literally got flagged down on the side of the road and tried to be a good Samaritan.”

She was held in a large holding cell for about 45 minutes, and then released and driven back to her car, which was still on the side of the highway. She had been detained for a total of about three hours.

Days later, back at work at Marfa City Hall, she was visited at her office by an agent with federal Homeland Security Investigations and a Texas Ranger. The federal agent handed her a search warrant for her phone, and she surrendered it. One of the friends she had texted that night told Ms. Todd that agents had also questioned her and examined her phone.

Ms. Todd has not been charged with a crime, though the three migrants from El Salvador were held for some time as material witnesses, suggesting that federal prosecutors were contemplating using them in a criminal case against her. They are now in an Immigration and Customs Enforcement facility in El Paso and could face deportation. “All three remain in ICE custody pending disposition of their immigration cases,” an ICE spokeswoman said in a statement.

A spokesman for the Border Patrol said the incident remains “an active case,” but declined further comment, as did the United States attorney’s office.

The episode has both angered and perplexed Ms. Todd and her friends and co-workers in Jeff Davis County. William Kitts, the Jeff Davis sheriff and a county government colleague of Ms. Todd’s, said numerous residents have assisted migrants, providing them with water or giving them a ride to his office. None have been prosecuted, and Sheriff Kitts said Ms. Todd shouldn’t be tried, either.

The sheriff said he believes that Esmeralda would have died had Ms. Todd not stopped to help her. According to court records, she was taken by Border Patrol agents to Big Bend Regional Medical Center in Alpine, Tex., and was treated for four days for starvation, dehydration, infected wounds from cactus spines and rhabdomyolysis, a serious condition that can lead to kidney failure.

“Harboring is a big jump for them to make in my book,” Sheriff Kitts said of the threatened criminal charges against Ms. Todd. “There’s a human component to this. We’ll let Congress and the politicians fight it out, but if somebody’s hungry or thirsty or needs some help, we’re going to help them.”

Kenneth Magidson, who served as the top federal prosecutor in Houston and in the South Texas border region from 2011 to 2017, said the government has begun taking “a harsher approach” to prosecuting such cases since President Trump took office. “Providing drinks of water or someone needs immediate medical assistance and you take them to a hospital — you’re stretching it,” he said. “You have to look at the entire context of the case. Was it at the person’s house? Were they spending the night? It’s more than just giving somebody on the side of the road some water.”

Ms. Todd said she plans to work with her congressional representatives on legislation exempting good Samaritans from federal prosecution.

“There is something bigger at stake than just me here, because this does send a message to try to chill people from helping others,” Ms. Todd said.

One day last week, she received one good surprise: The authorities returned her iPhone. “They took it at 11:30 in the morning and said I would have it back by 3 in the afternoon, 5 at the latest,” she said. “And 53 days later, I got my phone back.”

New exhibit explores history of the death penalty in Quebec