Trump’s latest attack on immigrants comes amid accusations that his rhetoric incites violence. 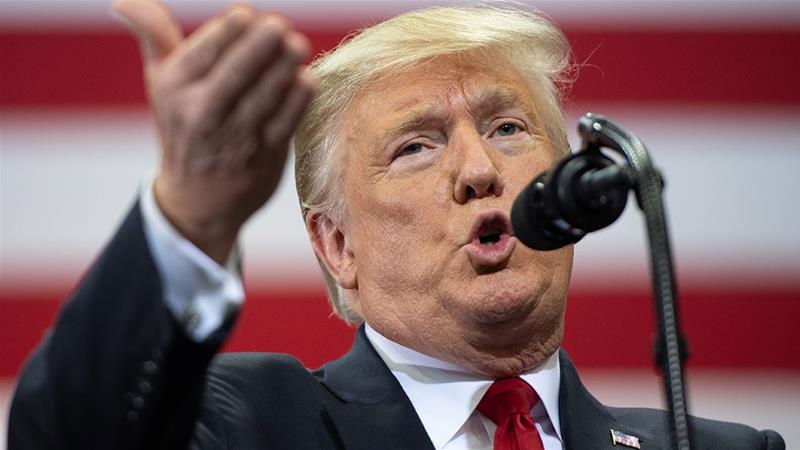 “Illegal immigrant, Luis Bracamontes, killed our people!” reads the opening line of the 53-second video, referring to a Mexican citizen who was sentenced to death over the 2014 killing of two police deputies in California.

“Democrats let him stay,” continues the video, which had more than 2.7 million views by midday on Thursday.

The video weaves back and forth between images of Bracamontes and footage showing the Central American migrant caravan.

“Who else would Democrats let in?” the ad concludes rhetorically, adding: “President Donald J Trump and Republicans are making America safe again.”

Trump, who has sought to drum up fear of immigrants before the November 6 vote, tweeted the video with the text: “It is outrageous what the Democrats are doing to our Country. Vote Republican now!”

He tweeted the video on the same day that he announced that up to 15,000 US troops could be deployed to the US-Mexico border in response to the caravan, which is still deep inside Mexican territory and far from the frontier. More than 5,000 troops are already headed there.

Many of the migrants and refugees on the initial wave caravan, which left Honduras more than two weeks ago, have told Al Jazeera they are fleeing violence, poverty and poor healthcare. Those who do eventually make it to the US border plan to apply for asylum at an official port of entry.

But Wednesday’s ad was among the most blatantly racist and drew comparisons to an infamous right-wing PAC commercial for former President George HW Bush’s successful 1988 campaign against Democrat Michael Dukakis.

That ad focused on William Horton, a man convicted murderer who committed kidnapping and rape after running away while out of prison on furlough. Civil rights groups later lambasted the ad as a racist appeal to white voters.

In 1988, the controversial Horton ad was produced and broadcast by an outside Super PAC, but unlike the Bush campaign, President Trump endorsed and promoted Wednesday’s anti-immigrant video.

Critics lashed out at Trump over the video.

According to CNN’s Jake Tapper, Jeff Flake, a Republican Senator from Arizona, decried the video as “a new low in campaigning” and “sickening”.

University of California Berkeley professor Robert Reich, who served as US Secretary of Labor from 1993 to 1997, called the ad “fearmongering” on Twitter. “This may be the most desperate and vile ad since Willie Horton,” he wrote.

Critics have accused Trump of employing rhetoric that incites violence, threats and hatred.

On Saturday, a gunman stormed a synagogue in Pittsburgh, Pennsylvania, where he shot dead 11 Jewish worshipers.

Trump denounced the violence. But the alleged attacker cited as motivation the caravan and recycled far-right conspiracy theories which claim that Jews are behind immigration.

On the Monday before the massacre, Trump addressed a campaign rally in Texas by claiming he is a “nationalist” fighting against “power-hungry globalists”.

Speaking to Al Jazeera at the time, experts pointed out that the term “globalist” has roots in far-right conspiracy theories that carry thinly-veiled anti-Semitic undertones.

In an interview with Axios, which aired on Tuesday, Trump vowed to do away with birthright citizenship, falsely claiming that he could abolish the constitutional right through executive order.

He also inaccurately claimed that the US is the only country in the world that grants automatic citizenship to people born on its soil.

Nine Ways to Recharge During the U.S. Open Tennis Championship