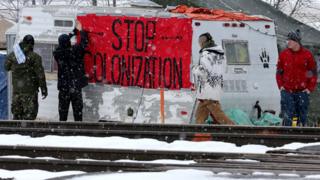 Port authorities said they have been forced to turn ships away due to the shutdown of the country’s freight routes.

The CN Rails routes are blocked due to protests against a pipeline that cuts through native lands.

Opposition Conservative leaders have called on the prime minister to clear the blockades through force, but the Liberal leader told reporters in Munich: “We are not the kind of country were politicians get to tell police what to do in operational matters”

“We will ensure that everything is done to resolve this through dialogue and constructive outcomes,” he said.

More than 150 routes had been cancelled previously amid protests against the Coastal GasLink pipeline.

The Association of Canadian Port Authorities said on Friday that the supply chain disruptions have forced authorities to turn away ships and reroute cargo to the United States.

“Shippers are looking at alternatives to move cargo, including the use of trucks. When you consider that a single rail car carries the equivalent of about three transport trucks, an extended disruption of rail traffic will have a major impact there as well,” the association said.

What has been the government response?

Federal Transport Minister Marc Garneau said there were signs progress could be made by engaging directly with protesters, pointing to a blockade in the province of British Columbia that was recently removed.

The two cabinet ministers in charge of indigenous affairs are preparing to meet with local indigenous bands in the provinces of Ontario and British Columbia.

Conservative leader Andrew Scheer said the protests are “threatening the jobs of thousands”.

“These activists may have the luxury of staying days at a time at the blockades but they need to check their privilege,” he said.

Freight trains transport more than C$310bn ($210bn; £179bn) worth of goods each year, according to the Railway Association of Canada.

Some 5 million Canadian commuters use the intercity passenger services of Via Rail on tracks mostly owned by CN. Thousands have already been forced to find alternative means of travel.

What is the issue?

The Coastal GasLink pipeline is a 670km (416 miles) project that would ship natural gas from north-eastern part of the province to the coast.

Some 28% of the pipeline route passes through Wet’suwet’en lands.

Coastal GasLink has reached deals with 20 elected indigenous councils along the route to move ahead with construction, including some Wet’suwet’en councils, coming to agreements on training, employment, and community investment.

But Wet’suwet’en chiefs oppose it and claim that they, not the community’s elected officials, hold authority over traditional lands. They have warned that the project will cause pollution and endanger wildlife.

For years, protesters have erected camps along the proposed pipeline route to prevent access to construction sites.

In early February, police enforced a court injunction and cleared the camps, arresting people in the process.

Meanwhile, other blockades have been erected across the country in solidarity, disrupting rail lines and ports.

Protesters have also held demonstrations at government buildings and legislatures across Canada.