SANTA CLAUS, Ga. — For nearly two years, a deadly ambush of American soldiers in Niger has spawned investigations, recriminations and reprimands. On Wednesday, it resulted in the awarding of one of the military’s highest honors for acts of valor.

As an Army captain read the award citation for Staff Sgt. Dustin M. Wright, the lights flickered and a summer storm rolled through this small southern Georgia town. A general spoke about the definition of a hero, and then Sergeant Wright’s father cleared his throat, gestured to the two photographs beside him and said, “This is my son.”

“He was my John Wayne,” the father, Arnold Wright, told the crowd in the community center.

The Army posthumously awarded Sergeant Wright the Silver Star for his actions on Oct. 4, 2017, when his 11-man Army Special Forces team and more than 30 Nigerien soldiers were ambushed by Islamic State fighters outside the village of Tongo Tongo in northwestern Niger.

The medal, the third-highest military honor that recognizes singular acts of valor and heroism, was one of nine awards given to members of Sergeant Wright’s Special Forces team. It was, in many ways, a fitting coda to the months of investigations the ambush generated.

But for Mr. Wright, himself a veteran, it was not just a tribute to his son but another marker in his attempts to understand that day, and to hold high-ranking officers accountable for what happened more than 22 months ago.

As Capt. Rick Dickson, a press officer, read the citation, a crowd including family members, soldiers from Sergeant Wright’s Special Forces team and the major general in charge of the 1st Special Forces Command, E. John Deedrick Jr., listened, some wiping their eyes. 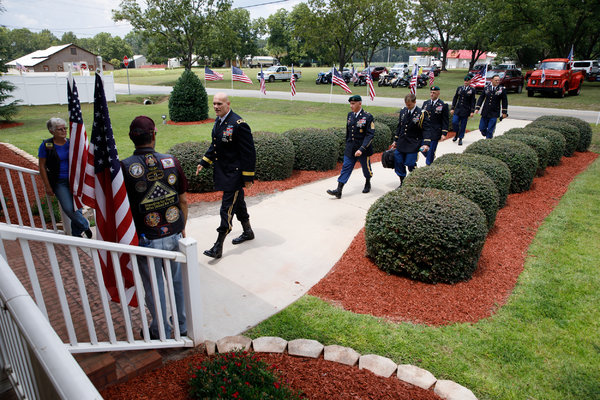 “With total disregard for his personal safety or life,” Captain Dickson said, Sergeant Wright “maneuvered multiple times across open terrain through intense and accurate fire from an overwhelming hostile force to protect and recover two of his fallen comrades.”

As Sergeant Wright turned back for his teammates, he was shot and killed.

The deaths of Sergeant Wright and three other soldiers from his Green Beret unit, Operational Detachment Alpha, Team 3212, were the largest loss of life in combat in Africa since the 1993 “Black Hawk Down” incident in Somalia. Four Nigeriens and an interpreter were also killed in the battle.

The awards mark the last component of the Pentagon’s more than yearlong investigation into the incident.

In June, Patrick M. Shanahan, the acting defense secretary at the time, finished his high-level review, which agreed with earlier findings that had mostly blamed junior officers and endorsed reprimands for eight Army Green Berets and a two-star Air Force general.

But other officers in the chain of command escaped punishment, including a Green Beret colonel, Bradley D. Moses, who was responsible for Special Operations missions in northwest Africa at the time and is now slated for promotion to brigadier general.

The length of the investigation and lack of reprimands for high-ranking military officials for ordering the team on the mission without knowing the enemy’s strength have infuriated Mr. Wright, who is calling for the punishment of Colonel Moses and the lieutenant colonel below him, David Painter.

“I told them one thing: I said don’t lie to me. And they did,” Mr. Wright said Wednesday.

In the months after the ambush, Mr. Wright and other family members were never told that the Green Beret team’s leader, Capt. Michael Perozeni, had told his commanders that his team did not have the necessary equipment or intelligence to make an unplanned raid on a local militant and had asked to return to base.

The team was told by the team’s battalion commander, Colonel Painter, to continue, but Islamic State fighters had been tracking the team and were preparing to attack.

Sergeant Jeremiah Johnson was posthumously awarded the Bronze Star for valor on Saturday near where he grew up in Greeneville, Tenn. Footage taken from a camera on his helmet, and later released in an Islamic State propaganda video, provided key evidence for some of the awards, including his own.

Sergeant Black’s family members flew to Fort Bragg, N.C., to receive his Bronze Star in a small ceremony on Tuesday. There, they stood alongside living members of Team 3212 who received their medals. Sergeant Black was recognized for killing several enemy fighters and for firing and maneuvering across open ground under intense fire in an effort to help protect his team, according to his citation.

Sgt. First Class Brent Bartels was awarded the Silver Star in the same ceremony. During the ambush, he was driving one of the team’s trucks when he was shot in the arm. Wounded, he doubled back in the truck and picked up the team leader, Captain Perozeni, who had been thrown from the bed of the vehicle during the firefight.

A sergeant first class whose name was not released and who joined Team 3212 just weeks before the ambush as its acting intelligence sergeant also received a Silver Star.

Absent was Captain Perozeni, who was initially recommended for the Silver Star. His award, according to a defense official, was reduced twice to an Army Commendation Medal. Some of the awards given to the team were also downgraded. Captain Perozeni was punished twice by the Army, only to have both letters of reprimand rescinded.

In Miami on Friday, Sergeant La David Johnson’s family will receive his Silver Star. Representative Frederica S. Wilson, a Florida Democrat who listened to President Trump’s conversation with the sergeant’s widow and publicly criticized the president afterward, is expected to be there, and Army officials fear that the event might turn into a political show.

The body of Sergeant La David Johnson, an Army mechanic and the driver of one of the Americans’ trucks, had been missing for two days before he was found by locals in the area. He had been pinned down by heavy fire and could not get back into the driver’s seat of his truck. He ran west for almost a quarter-mile before taking cover, firing until the advancing militants surrounded and killed him.

US buys nearly all stocks of coronavirus drug remdesivir