Battered by a wave of coronavirus infections and deaths, local jails and state prison systems around the United States have resorted to a drastic strategy to keep the virus at bay: Shutting down completely and transferring their inmates elsewhere.

From California to Missouri to Pennsylvania, state and local officials say that so many guards have fallen ill with the virus and are unable to work that abruptly closing some correctional facilities is the only way to maintain community security and prisoner safety.

Experts say the fallout is easy to predict: The jails and prisons that stay open will probably become even more crowded, unsanitary and disease-ridden, and the transfers are likely to help the virus proliferate both inside and outside the walls.

“Movement of people is dangerous,” said Lauren Brinkley-Rubinstein, a professor at the University of North Carolina School of Medicine, who has been tracking coronavirus cases in correctional settings. “We’ve got really good examples of overcrowding equals more infection and greater risk of outbreak. We’ve got lots of evidence that even transferring people from one facility to the next is very dangerous.“

There have been more than 480,000 confirmed coronavirus infections and at least 2,100 deaths among inmates and guards in prisons, jails and detention centers across the nation, according to a New York Times database.

Among those grim statistics are the nearly 100,000 correctional officers who have tested positive and 170 who have died.

Early in the pandemic, some states tried to ward off virus outbreaks by releasing some offenders early and detaining fewer people awaiting trial in order to reduce their populations, but those efforts often met with resistance from politicians and the public. 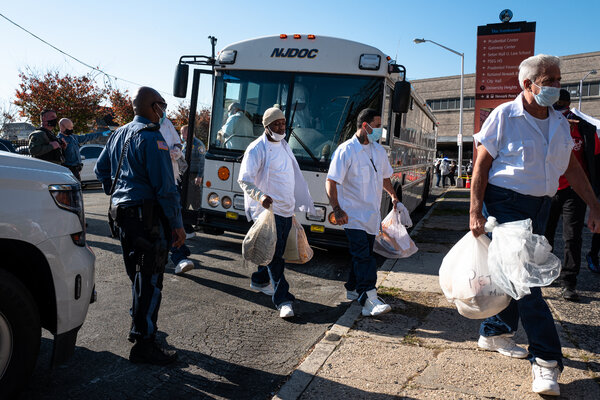 More recently, as arrests in many areas have increased, jail populations have returned to pre-pandemic levels, according to data collected by the Vera Institute of Justice, a nonprofit research and policy group based in New York.

That fact, combined with widespread infections among correctional officers, staffing shortages stretching back many years and strains on prison medical facilities, have pushed states as the pandemic progresses toward more concentration and crowding, rather than less, in part through closure of strained facilities.

In late November and early December, for instance, North Carolina prison officials closed the Randolph Correctional Center in Asheboro along with three minimum security facilities and have not ruled out more closures.

“It feels like we’re holding this together with bubble gum and packaging tape,” Todd Ishee, the state commissioner of prisons, said in a recent interview. “Really, we’re all in the same boat. It’s challenging our community. It’s challenging prison systems north, south, east and west.”

Wisconsin has closed a cell block at its prison in Waupun and started moving its 220 inmates to other prisons, despite warnings that similar prison transfers elsewhere have sown deadly outbreaks, including at San Quentin State Prison in California.

Infections and deaths in the prison system have more than doubled since the beginning of November, according to a New York Times analysis of state data.

More than one-third of Waupun’s guards have been infected since the start of the pandemic, according to state data.

In Missouri, Howard and Pike Counties shut down their jails. In a terse Facebook post, the Howard County Sheriff’s Office wrote: “The jail is temporarily closed due to shortness of staff due to illness. All detainees are currently being housed in Cooper County.”

Matt Oller, the Audrain County sheriff, said he had accepted some two dozen inmates from Pike County, and would not have agreed to do so had he not been confident that he could ensure some measure of social distancing and adequate cleaning in his jail.

“It’s a place where there’s a lot of people in one place at one time,” he said. “Any infectious disease is a concern in a jail setting.”

Elsewhere, the authorities have so far rejected prison closures, but have taken sweeping measures to try to keep pace with a virus that has moved through prisons with lightning speed.

Ohio and New Hampshire have each called in the National Guard to bolster thinned correctional staff. Michigan has transferred hundreds of inmates around its prison system as staff counts have dipped, despite infection rates in the prison system doubling during the past month, according to The Times’ data.

Analysts say the root of the problem lies in mass incarceration, particularly in rural areas, where most of the closures are occurring.

While advocacy groups have pressed states to reduce incarceration levels and close prisons for years — with limited success — some believe the continuing wave of closures brought on by the coronavirus might spark more permanent change.

“One of the really obvious things that needs to happen is fewer people need to be locked up, and this is the time to make some of those changes,” said Jacob Kang-Brown, a senior research associate at Vera. “The burden of Covid-19 has been already too high in prisons and jails and the continued transfers of people between facilities is spreading and causing further outbreaks. It’s really concerning.”

In some states, correctional officers earn less than $12.50 an hour — not much more than fast food workers — and many lack broad job protections or benefits.

North Carolina, which as of Dec. 31 had more than 8,000 infections and 36 deaths of inmates and guards in its prison system, is under a state court order to test staff members every two weeks and to ensure that inmates are only transferred after they have been tested. Many of the transfers have taken place because facilities are being closed.

The state prison system has in recent months been one of the hardest hit in the nation by illness. It is also one of a number of states that have granted relatively few early releases since the pandemic began in March.

Ardis Watkins, executive director of the North Carolina State Employees Association, the union that represents the state’s correctional officers, said the virus had overwhelmed the community of prison guards — bringing not only sickness and death, but foreboding.

The prison closures and subsequent inmate transfers, she said, were like “pouring gasoline on a fire.”

“They’re terrified. They realize that when they go to work, they may not come home at the end of the day,” Ms. Watkins said. “The nature of the job is, ‘anything could happen, including getting killed.’ But what they’re not used to is knowing that going to work might mean their family can get a disease that they could die from.”

Ms. Watkins said that the risks taken by correctional officers are not understood by the public.

“People don’t see the prison system. They don’t think about it,” she said. “In this pandemic, the work that’s done that is so dangerous is not being valued,” she added. “So that frustration is growing. They feel like, as usual, they’re forgotten and left behind.”

Mr. Ishee, who oversees North Carolina’s prisons, agreed that the hazards taken on by guards had been considerable.

“Men and women who are working in prisons throughout our country have a very dangerous and difficult job to begin with,” he said. “This virus now poses a direct threat to their health and the health of their families.”

Virginia Little, whose son, Marvin Little, has been transferred between North Carolina prisons — including one whose minimum-security facility the state temporarily closed because of a shortage of staff — said the prison system did not appear to have taken sufficient safety precautions during transfers.

“He’s scared, and I’m scared for him,” Ms. Little said about her 50-year-old son, who is incarcerated at Johnston Correctional Institution in Smithfield. “At one point in time when they were transferred, they had to shut down the facility where he is now, and they all were shipped to Southern Correctional in Troy. So I guess after they fumigated all of the — whatever they needed to do — they were shipped back to Johnston.”

Robert Thomas Jr., whose 59-year-old father is incarcerated at Neuse Correctional Facility in Goldsboro, N.C., said he believed the prison system had been negligent in its transfer policies.

His father, Robert Thomas Sr., was infected by the coronavirus this spring as prisons were closed and hundreds of inmates were put on buses to different facilities.

“They’ve been transferring inmates this whole time,” he said. “I know a lot of inmates, they’re transferred in — and a couple days after they get there, they go into the hospital with coronavirus. They had it before they even came in.”

His father, a former Marine who is diabetic and has hypertension and heart disease, survived the virus. But after he recovered, Mr. Thomas Sr. said, he was transferred twice more. He is now at Neuse prison, where nearly 500 inmates have been sickened and three have died from the virus.

Trump suffers setbacks in his bid to stop immigrants