Weather: Clouds clear away in the afternoon. High around 90. 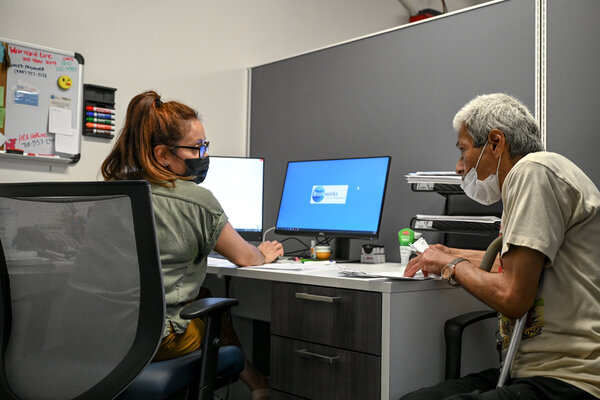 When New York State created a rent relief program to help tenants struggling in the pandemic, it set aside about $2.7 billion to give to households that have fallen behind.

But after nearly two months, the money has been slow to reach those who need it. Federal data shows that New York has been one of the slowest states to distribute assistance.

By the end of June, New York was one of only two states where no aid had been sent out — and the state’s moratorium on evictions is set to expire at the end of August.

Many tenant advocates believe that the program will ultimately prove to be crucial, even as some groups say the application process is overly complex.

The application process for the state’s rental assistance program is primarily online. Housing groups say the website has been hobbled by technical glitches, and tenants have encountered errors that in some cases wiped away entire applications.

Both tenants and landlords have to fill out forms and submit paperwork, but they have said that uploading the required information has been cumbersome. The process also takes a long time to complete because the system has no way to save and restart an application.

Tenant advocates are also concerned that the system may be hard to reach for residents of low-income neighborhoods with poor internet access, homes where English is not the primary language and people who do not have ready access to laptops or smartphones. Many among those groups may be most at risk of eviction.

State officials said 160,000 applications had been submitted as of last week and that technical issues were being dealt with as they arose. Officials have also said that they are prioritizing applications from the most indigent tenants.

Under the program, tenants who submit a properly completed application will be protected from eviction, even if their case is being processed and aid has not been distributed.

Officials said that they had started distributing a small sum — $117,000 — this month to test the payment system and that more funds were expected to be sent out.

Still, the need in New York, which has more renters than any other state, is huge, and it is not clear how many tenants will actually benefit from the program.

5 Dead in Hamptons Crash That Is Blamed on Speeding

After New York Tests a New Way of Voting, Other Cities May Do the Same

What’s the Best Way to Protect Sex Workers? Depends on Whom You Ask.

What Happens When Your Waiter Can’t Afford Rent

Barney, a 1,500-pound bull, was still on the loose this weekend on Long Island after escaping from a farm earlier in the week. [Newsday]

After a rough year, restaurant openings are increasing again — though the numbers are still down from before the pandemic. [Eater NY]

And finally: The marriage bureau is open again

Tali Agai and her fiancé, Kyle Eisenman, were among the couples anxiously awaiting for the doors to the Manhattan Marriage Bureau to open at 8:45 a.m. on Friday. The couple, who met on the dating site Tinder seven years ago, have had to change their wedding plans twice because of the coronavirus.

“We are more than ready to be married,” said Mr. Eisenman, 34. He and Ms. Agai, 35, planned to celebrate their union at the Prospect Park Boathouse in Brooklyn over the weekend.

Because of the pandemic, the Manhattan Marriage Bureau closed its doors in March 2020. Workers there perfected a virtual system for giving out marriage licenses, and another system for virtual weddings, which New York allowed from April 2020 through June 2021.

But on Friday, the office reopened for the first time in 15 months, amid excitement from couples waiting to tie the knot in person and the civil servants who shepherd couples through the process.

Still, day-to-day in-person business at the Manhattan Marriage Bureau is different now. Couples can get married, but wedding parties cannot accompany them to the civil ceremonies.

“It’s tough to accept, but many things have changed, and there’s a very good reason as to why,” said Michael McSweeney, the city clerk.

On a trip to New York City, I convinced my wife, Linda, to join me on a baseball pilgrimage: a walk to the spot where Ebbets Field’s home plate once was.

After taking the subway to Prospect Park, we wandered toward Sullivan Place and the large apartment complex where the Dodgers’ ballpark used to be.

We spotted Jackie Robinson Park down the street, but we could not find a sign pointing us to home plate’s former home.

Suddenly, we heard a loud voice bellowing from a distance.

“Are you looking for the home plate?”

We looked up toward the apartment building entrance and saw a female security guard with a big grin.

Linda and I looked at each other and laughed.

“Follow me,” she said, waving us up the stairs.

Soon, we were following her along a walkway and down a set of stairs to the parking lot at the back of the complex.

“I have people like you coming by here all the time looking for home plate,” she said as we came to the end of our impromptu tour.

“Here it is,” she said. “You can take your pictures now.”

We thanked her and took a couple of photos.

She turned and walked away while my wife and I stared at the plaque: “Site of Ebbets Field Home Plate. Home to the Brooklyn Dodgers 1913-1957. At this location on April 15, 1947, Jack Roosevelt Robinson integrated Major League Baseball.”

Inside El Chapo’s Vast Network: What We Know After the Trial’s First Week