CHICAGO — Two rare birds, a major music festival and an overflowing Lake Michigan all claimed a beach on Chicago’s North Side. But there was not enough sand to go around.

The lake, which rose to levels not seen in decades, formed lagoons where sunbathers once lounged.

The festival, which would have featured disco yoga sessions and musicians across three stages, was canceled.

And the birds, one of only about 75 mating pairs of the endangered piping plover left in the Great Lakes region, lost their nest in the rising water.

With help from more than 180 volunteers who kept curious humans and errant volleyballs at a distance, the tiny, photogenic plovers recently built a new nest further inland, away from the swollen waters, and mated again. Three chicks hatched. Two survived.

“How do we make things succeed even in the face of the most daunting challenges?” said Tamima Itani, who some weeks spent 20 to 30 hours protecting the piping plovers, including one harrowing moment when an off-leash dog ran straight toward the chicks. 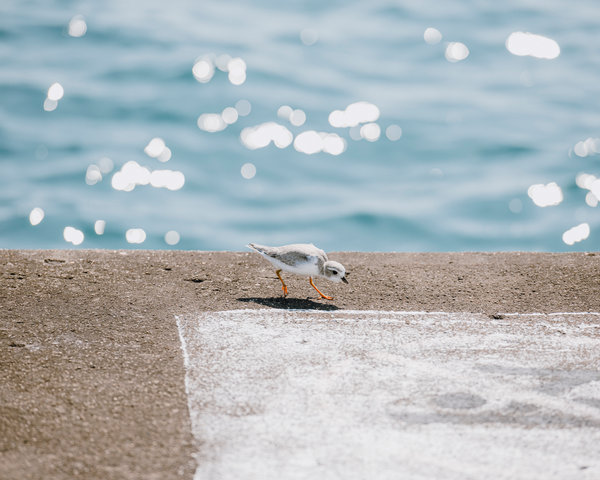 Across the Great Lakes, high water levels have upended summer, swallowing beaches, closing in on century-old buildings and threatening wildlife.

“Long term, I don’t know how anybody along the lakeshore deals with it,” said Mitch Foster, the city manager in Ludington, Mich., where the rising water has closed roads, damaged homes and seeped into a museum.

There have been benefits, including for massive shipping freighters, which have been able to haul heavier loads across Lake Superior. Mostly, though, the high waters have caused concern, like on Lake Ontario, where the New York National Guard was called in to help with flood control, and along Lake Erie, where water has spilled into the streets.

The higher water, which set records this summer on some Great Lakes, could be part of an expensive new normal. Though water levels have always fluctuated, scientists have suggested that in the coming decades climate change could cause higher highs, with periods of intense rainfall and snow, and lower lows, with times of warmer temperatures and increased evaporation. 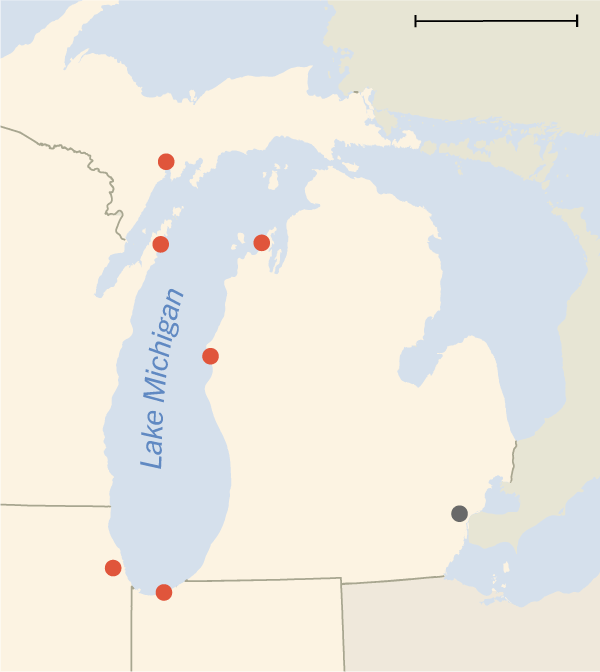 To understand how extreme lake levels have reshaped life on the water, a New York Times reporter and photographer drove around Lake Michigan. Over 1,234 miles, four states, two time zones and 34 counties, there were crowded hotels, packed beaches and landscapes worthy of a magazine cover. But in town after town, higher waters were leaving damage, interrupting routines and stirring fears that the worst may be yet to come.

Clinging to the Edge

Once separated from the lake by a generous, sandy beach, Mr. Coombs’s house and dozens of others in the town of Ogden Dunes, about an hour’s drive from Chicago, are now protected by little more than a faltering sea wall and a small patio. Mr. Coombs fears that his house could eventually fall into the water.

“It is so unnerving,” he said.

The beach at Ogden Dunes was starving for sand long before lake levels rose — a product, residents and local officials believe, of a port that juts into the lake nearby, shifting the natural process that reshapes their beach over time. (Officials at the port say that it has no role in the sand shortage, and that other factors are to blame.)

Now rising lake levels have accelerated erosion. Public walkways to the beach now lead straight into the water. Homeowners fear that their properties will never sell.

Local officials say they would need government permits and millions of dollars to fix the problem and pump sand onto the beach. So far, help has not come.

Residents of Ogden Dunes only need to glance a few dozen yards down the lake to imagine what the future may hold. There, in Portage, Ind., a multimillion-dollar beachfront development opened to great fanfare 11 years ago, but parts of the sidewalk and waterfront walkway have vanished into water. Sand dunes have been sliced open. Most of the beach is gone.

Ferries Instead of Bridges

LUDINGTON, Mich. — Every few days, workers in Ludington pump out lake water that has infiltrated the sewer system and spilled onto an intersection. About 12 hours later, after they finish pumping, the water is back.

It is a thankless, endless task — and one that is unlikely to be enough to save some roads and sidewalks in Ludington, about halfway up Michigan’s Lower Peninsula.

In Ludington and other places around the lake, infrastructure damage is complicating daily life and growing worse as long as the water stays high. In Wisconsin, docks are underwater. On Michigan’s Upper Peninsula, perch have been spotted swimming up sidewalks. And in Pentwater, Mich., a short drive from Ludington, an inland bridge made inaccessible by the rising water has cut off one side of town from the other.

In an effort to spare residents a lengthy detour, Pentwater bought a ferry this summer and started offering free rides across Pentwater Lake, just off Lake Michigan.

“It’s seamless,” said Marjory Basile, who now rides the ferry from her cottage to the yacht club and the grocery store, and who had been bracing for an onerous summer of detours.

The scope and expense of the region’s damage may not be known for months.

Mr. Foster, the Ludington city manager, said he was bracing for new sidewalks and roads and improvements to the harbor, as well as sinkholes to repair after the water drops.

LELAND, Mich. — Fishtown, a set of wooden shanties where visitors can shop for T-shirts and sandwiches or watch commercial fishermen set off on boats, links today’s tourist-focused Lake Michigan to the region’s grittier fishing past.

In Leland, on the northeast side of the lake, one shanty, dating to 1903, was covered in water from Lake Michigan and an inland dam most of the summer. Parts of the dock have been engulfed. At a nearby hotel, a room flooded in the middle of the night a few weeks ago and sandbags wait at the ready in case another surge comes.

Amanda Holmes, the executive director of the Fishtown Preservation Society, a nonprofit group that owns most of the shanties, said that high water has made repairs urgent. Shanties need to be elevated. The docks need to be raised.

Construction is scheduled to start in October, but hundreds of thousands of dollars are still needed. The nonprofit’s pitch to donors: “Your gift,” it said online, “will keep Fishtown literally above water.”

GLADSTONE, Mich. — Winter comes early and stays late in Gladstone, near the top of Lake Michigan.

During the fast-fleeting summer, residents grimaced through the hassle of soggy sand volleyball courts. They jogged in the streets after a nature trail was battered by water. And they wrestled to fill their boats with gas even when the marina pumps were partly underwater.

But if water levels do not drop before the lake freezes, the problems could turn much worse. Nicole Sanderson, the city’s parks and recreation director, fears major damage. Sheet piling in the municipal harbor could sustain significant damage when the water freezes and expands.

“We’re really trying to weigh out what should we try to protect, what should we just take as a loss, what can we just keep our fingers crossed for,” she said.

The good news for Ms. Sanderson is that the Army Corps of Engineers, which monitors lake levels, expects the water to drop enough to stave off the worst of the damage. The bad news: Forecasting lake levels months in advance is an imperfect science, and her city remains exposed, especially if there is a rainy fall or an early freeze.

On some of the Great Lakes, water has started to recede from the summer crest. But it remains at some of the highest levels on record.

“There’s really nothing you can do to stop Lake Michigan,” Ms. Sanderson said.

A Hayride on the Lake

BAILEYS HARBOR, Wis. — The Poseidon plows through Lake Michigan every 15 minutes or so, carrying sightseers across 100 yards of water to the Cana Island Lighthouse, a beloved attraction that only recently became an actual island.

The lighthouse, a 150-year-old white tower that shines roughly 18 miles into the Wisconsin night, was long accessible by a narrow causeway that tourists could walk across without getting their socks wet. As the lake rose, the pathway vanished.

Worried about losing tourists, the group that manages Cana Island, located about 175 miles northeast of Milwaukee, had to improvise. They leased Poseidon, a bright-green John Deere tractor that pulls a wagon with bench seating, sort of like a hayride through a lake.

The tractor has been a hit with visitors, especially children, who prefer a water ride to a walk. And it has kept the lighthouse open. “Nothing swims like a Deere,” said Hal Wilson, who manages the site.

Mitch Smith covers the Midwest and the Great Plains. Since joining The Times in 2014, he has written extensively about urban violence, oil pipelines, state-level politics and the national debate over police tactics. He is based in Chicago.  @mitchksmith

‘I have not interfered in any way,’ acting U.S. AG Whitaker says of Mueller investigation