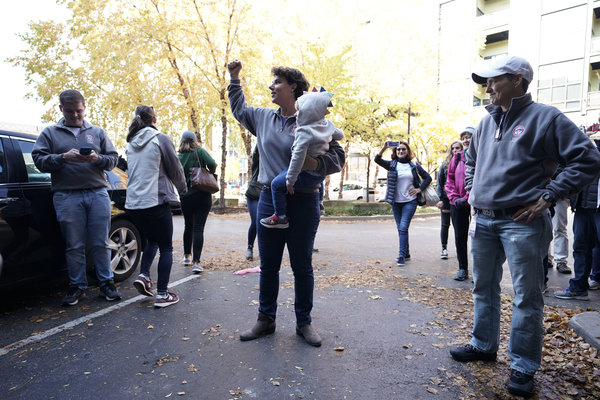 Asked whether she was a feminist, Amy McGrath, the former Marine fighter pilot running for Congress in Kentucky, was emphatic: “Hell yeah, I’m a feminist.” Her opponent, Representative Andy Barr, turned her words into an attack ad.

Many politicians have considered the word “feminist” toxic. But that might be changing. In 11 battleground districts nationwide, including Kentucky’s Sixth, about half of voters said they supported electing feminists, compared with roughly a third who opposed it, according to Upshot/Siena House polls this fall. About a fifth said they didn’t know.

We don’t have past surveys asking the same question to compare with these results, and support of feminist candidates is still not a majority opinion — more Republicans opposed electing them than supported it. But the overall support our polls found would have been unthinkable in even recent elections, scholars say. Some compare this moment to the feminist political movements of the 1920s and 1970s.

The spark, people across the political spectrum said, was the MeToo movement, after the misogyny seen in the 2016 presidential campaign.

“An embrace of the term in political candidates? That’s news,” said Estelle Freedman, a professor at Stanford who specializes in women’s history. “We know that women have been really politicized by the perceived assault on women’s rights writ large. The kindling was there, and it got ignited by the misogyny.”

One reason that voters’ support for feminist candidates is surprising is that in a variety of surveys, only a fifth or fewer identify as feminists themselves. (The share goes up when the word is defined as equal rights for men and women, or when specific feminist policies are mentioned.) Our polling question, asked in 14 districts, was whether respondents supported or opposed electing more people who describe themselves as feminists. It did not define the term.

Supporting feminist candidates is tricky, said Phillip Farmer, 38, a web developer in Perryville, Ky., because it has become “a very divisive word.” But he is voting for Ms. McGrath, and said her feminism was one reason. “If I hear that word, I hear equal rights, equal pay, equal opportunity,” he said. “It seems so basic.”

Beth Ann Haydon, 60, a small-business owner in Midway, Ky., said she does not support electing feminists, and is voting for Mr. Barr. “Fairness is all I ask for,” she said. “We’re strong-willed women, we’re smart and savvy and entrepreneurs. I don’t want to be boxed in as a feminist.”

In Kentucky’s Sixth, 47 percent of voters said they supported electing more feminist candidates, and 34 percent opposed it. Nineteen percent said they didn’t know. In four districts we polled in Pennsylvania, New York, Arizona and Minnesota, more than 50 percent of voters supported electing feminists. We found just around 41 percent support for feminist candidates in three other districts we polled, two in North Carolina and one in Virginia, but even that was slightly larger than the share opposing.

Three-quarters of women 18 to 34 supported electing more feminists, compared with 43 percent of women 65 and older.

“There’s a strong segment of conservative, Fox News-watching, Donald Trump-supporting women who are likely to support him no matter what, and likely to see the word feminism as toxic to them,” said Mindy Finn, the independent vice-presidential candidate in the 2016 election and a co-founder of Stand Up Republic. “But there’s a whole other set of conservative women, particularly younger women, who want to see strong role models in positions of power dominated by men, including running for office.”

Issues like sexual harassment, she said, “are what weds conservatives to the word ‘feminism.’”

For many people, the decision on voting for feminists had come down to abortion rights. But the definition has recently broadened, analysts said.

“There had been a simple equation: Feminist equals abortion equals Democratic Party,” said Catherine Rymph, chairwoman of the history department at the University of Missouri, who has studied feminism and conservatism. “Maybe because of the issues that are on the table this election cycle, there’s space for people to see feminism as standing for different things.”

Amanda Arjona, 39, a human resources specialist in McHenry, Ill., says she’s “a pro-life feminist” and moderate, but is voting for the Democratic House candidate in her district, Lauren Underwood. “I’m a Christian, but I still think having rights for all people is important,” she said.

Politically, MeToo has helped make feminism about the right of women to participate in the economy, said Heather Boushey, executive director of the Washington Center for Equitable Growth, who was an economic adviser to Hillary Clinton.

“It’s about the ability to just get a job and to be free of harassment,” Ms. Boushey said, adding, “Both men and women have a deep, vested interest in women’s economic success.”

But MeToo has turned some voters against feminism, who say it casts women as victims and entitled to special treatment.

In a previous interview about Ms. McGrath’s feminism, Mr. Barr said he believed in equal opportunity. “What people around here understand, though,” he said, “is that feminism used the way my opponent uses it is the politics of entitlement based on an immutable characteristic.”

Danny Stidham, a 63-year-old computer technologist in Lawrenceburg, Ky., said his support for feminist candidates depends on what they think the word means. “If by feminist they mean a firm believer in the MeToo movement, I have a problem with that,” he said. “Don’t get me wrong, I don’t believe women should be mistreated, but from what I’ve seen, the MeToo movement appears to be: Believe women no matter what.” He is voting for Mr. Barr.

The word feminist was not always affiliated with political liberals. Shortly after the 19th Amendment gave women the right to vote in 1920, a split emerged among suffragists. On one side, women who called themselves feminists backed the Equal Rights Amendment, which would erase legal distinctions between the sexes. They tended to be elite, educated and professional. On the other side, a much bigger group, which included working-class women and labor unions, supported laws that limited women’s work hours. This group rejected the “feminist” label.

The word burst into the mainstream again in the 1970s. The new movement wasn’t initially partisan — feminists were anyone fighting for women’s rights, whether they were reproductive rights or those related to workplaces and marriages. But as the Republican Party embraced the family values platform and rejected abortion, feminism became associated with the Democratic Party.

Younger feminists, who came of age in the wake of Anita Hill’s testimony against Clarence Thomas and the surge of women who ran for office in 1992, have tried to make the word less polarizing.

They have said, “Let’s get on with it, we’re feminists and also other things, anti-racist, gender-nonconforming, let’s not fall into name-calling,” Ms. Freedman said.

Claire Cain Miller writes about gender, families and the future of work for The Upshot. She joined The Times in 2008 and was part of a team that won a Pulitzer Prize in 2018 for public service for reporting on workplace sexual harassment issues. @clairecm • Facebook

After failing to change the channel on SNC-Lavalin, Trudeau could try firing Wernick: crisis expert

Trump and the death penalty: The story of Lisa Montgomery