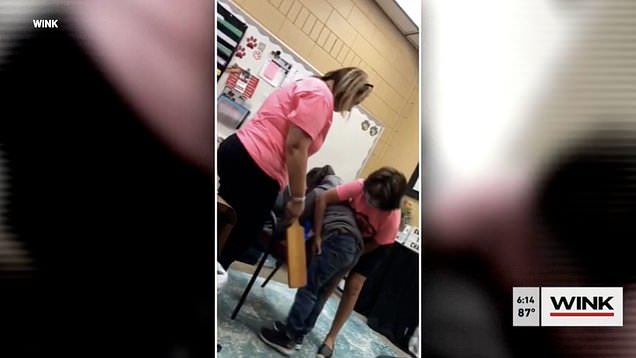 Principal Melissa Carter was filmed smacking the student by the girl’s own mother in an officer at the Central Elementary School in Clewiston, Florida. The cell phone footage sparked outrage online and was met by demands by the girl’s family lawyer for Carter to face criminal charges for ‘aggravated battery’.

But following a review, the State Attorney’s Office has found that Carter did not commit a crime as prosecutors accuse the girl’s mother of ‘consenting’ to the spanking.

Video footage of the April 13 incident shows Carter paddle the schoolgirl three times with force, while school clerk Cecilia Self pins her down. The girl’s mother filmed the clip in secret after apparently being called to the school because her daughter had allegedly caused $50 in damage to a computer. 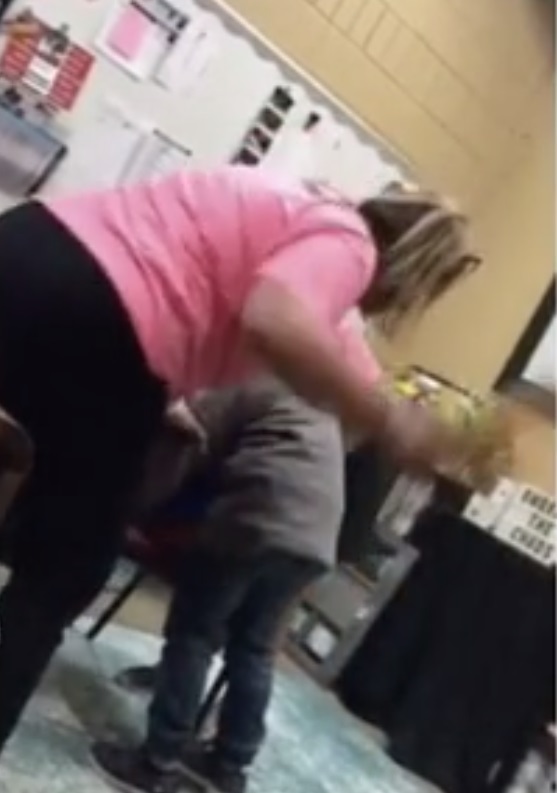 At the time, the mother told WINK-TV she ‘sacrificed’ her daughter and let her take the spanking without intervening to expose the school.

Now, in a memo, the attorney’s office have said those comments indicate that the mother knew the girl would be paddled.

‘A parent has a right to use corporal punishment to discipline their children, and similarly has the right to consent that others do so on their behalf’, the Hendry County attorney’s office’s memo said.

Corporal punishment is legal in Florida but is not allowed in Hendry County schools.

According to the memo, the child’s mother initially reported the incident to the Hendry County Sheriff’s Office on April 14, the day after her daughter was paddled at school.

The memo called the child’s mother’s credibility into question after Carter and Self told authorities that the child’s mother was afraid to discipline her daughter herself in case the child called police and child services.

Self told the attorney’s office that the child’s mother requested the school spank her daughter, and was told she needed to be present for the spanking, reports WINK-TV.

According to both Carter and Self, the child’s mother made the request directly to school staff.

In a statement, the family’s attorney Brent Probinksy said they are ‘very disappointed; by the decision to not prosecute.

He said: ‘The family and I as their lawyer are very disappointed that the State Attorney, Amira Fox, did not criminally charge the school principal and her assistant who savagely beat this innocent six-year-old with a paddle for merely scratching a computer.

‘The State Attorney in our estimation failed to hold accountable those who violate their responsibility to educate and nurture school children under their care, and instead, physically and emotionally abuse them.’

Probinsky told the Attorney’s Office he believes the paddling amounted to aggravated battery, but prosecutors disagreed.

‘It is clear using a paddle to spank a child is not likely to cause death or great bodily harm’, the memo states.

The ruling also outlined how Florida law states that spanking a child does not amount to child abuse.

US election results: Joe Biden has called for unity but he may not find it in Arizona