The husband of a former sheriff’s deputy in Texas has been sentenced to 25 years in prison for fatally choking a man during a confrontation outside of a Denny’s restaurant near Houston last year, prosecutors said on Thursday.

Terry Bryan Thompson, 42, was convicted of murder on Monday in Harris County District Court for killing John Hernandez after putting him in a chokehold outside of the restaurant in the Crosby area in May 2017. A bystander recorded part of their confrontation on a cellphone, which shows Mr. Hernandez kicking his legs as Mr. Thompson lies on top of him, pinning him to the sidewalk while he has him in a chokehold.

Mr. Thompson’s wife, Chauna Thompson, who was an off-duty sheriff’s deputy for Harris County at the time, appears on the recording pinning Mr. Hernandez’s arm to the ground. Ms. Thompson, 46, goes on trial in April on murder charges; an attorney for her did not immediately respond to a request for comment on Thursday. The couple was indicted in June 2017, not long after Mr. Hernandez died.

Ms. Thompson faces the same charge of murder. If convicted, she would face a minimum sentence of five years in prison and a maximum of life.

On Wednesday, Mr. Thompson closed his eyes and slumped briefly while standing for the jury’s announcement of the sentence, video footage from local news organizations showed.

The authorities in Harris County, which includes Houston, had faced pressure to bring charges against the couple. Protesters marched through downtown Houston demanding justice for Mr. Hernandez, a glass installer, and questioning the handling of a case that involved a law enforcement official.

Outside of the courtroom on Wednesday, the Harris County district attorney, Kim K. Ogg, said she hoped the decision would give comfort to the family of Mr. Hernandez and others who cared about him.

“There are no second-class victims in Harris County,” she said, speaking to reporters after the sentencing. “Everybody gets treated equal.” 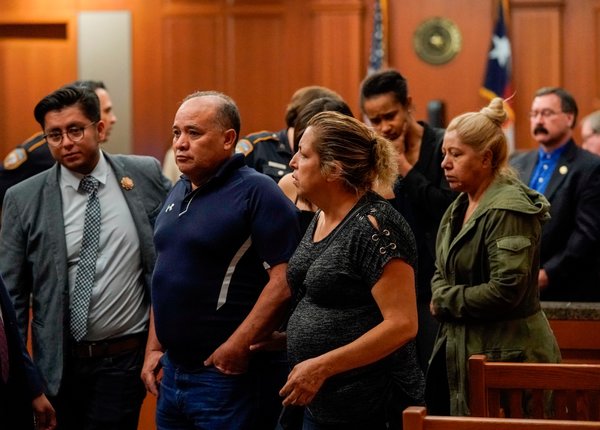 In an interview on Thursday, Ms. Ogg said that the sentence would send a message that crimes committed against people in “historically disenfranchised” communities were dealt with fairly, even when law enforcement officials or their family members were involved.

“This verdict was a reflection of my administration’s policy and commitment to equal protection of everyone, regardless of their economic or racial status,” Ms. Ogg said.

“It is not historic,” she added. “But it is a sign that times are changing for the better.”

On Thursday, Maria Toral, Mr. Hernandez’s wife, declined to comment when reached by telephone. In court on Wednesday, Ms. Toral told the court that she visits Mr. Hernandez’s grave with their daughter, according to The Houston Chronicle. “She stands on one foot and looks up to the sky and says, ‘Look at me, Daddy, I’m a big girl now,’” Ms. Toral said, in tears.

Scot Courtney, who was Mr. Thompson’s lawyer at trial and has filed a notice to appeal, said in court on Wednesday that his client was a “good man” who “absolutely” made a bad decision, according to The Chronicle. “You need to give him a sentence that will allow him to, one day, return to his family and the responsibilities that he has taken care of,” he said.

In an interview on Thursday, Mr. Courtney said he had sought a two- to 20-year sentence based on a “sudden passion” argument, which suggests Mr. Thompson’s actions were spontaneous as a reaction to being hit by Mr. Hernandez first.

“Race had nothing to do with this case,” he said.

Mr. Thompson confronted Mr. Hernandez on May 28 last year at around 11:40 p.m. after pulling into the Denny’s parking lot with his children about 17 miles from downtown Houston, the authorities said. Mr. Thompson approached Mr. Hernandez, who was intoxicated and urinating outside the restaurant, which led to the fight that left Mr. Hernandez lying face-first on the sidewalk, the Harris County sheriff’s office said.

The recording, which was obtained by a lawyer for the Hernandez family, shows Ms. Thompson, who arrived in a separate car, yelling at Mr. Hernandez to stay on the ground, screaming an expletive at him and driving her right knee into his side.

“Do you want me to hit you again?” Mr. Thompson shouted at Mr. Hernandez, his arm wrapped around his neck.

As The Times reported last year, Mr. Hernandez grunted and struggled. Melissa Trammell, a Denny’s employee who was waiting on Mr. Hernandez and his wife, said she ran outside after seeing Mr. Thompson holding Mr. Hernandez against the ground. At least two people blocked view of the scene and confronted the person recording, saying such documentation was illegal.

“We begged this man, me and my manager, begged this man for him to stop,” Ms. Trammell told reporters. “He was turning purple. He was kicking for his life.”