Home » Americas » The Artist vs. the Technocrat: A $2 Million Parable

In 1974, Dorothea Rockburne, 42 and Canadian, was enjoying the beginnings of success as an artist in late midcentury Manhattan. Two years earlier she had received a Guggenheim fellowship, followed by an exhibit at the influential Lisson Gallery in London and an appearance on the cover of Artforum. Now the hardest years of motherhood and paycheck work behind her, she was preparing for a group show at the Museum of Modern Art, when the downtown building where she had lived and answered to her creative impulses for 16 years, was sold.

The outgoing owner understood that as a single mother, Ms. Rockburne operated under certain financial constraints, and he often gave her the clothes his own daughter had outgrown. Conforming to a different model of proprietorship, the new landlord arrived and promptly evicted everyone.

After looking at a series of untenable places, each of them dark and miserable, she found a 6,200-square-foot loft in SoHo, where I visited her on a stifling morning recently. Ms. Rockburne was at the center of a conflict, old and clear enough in its metaphoric valence to feel biblical — a clash between the dismissive habits of the all-powerful materialist class that has colonized downtown and the old bohemian values. 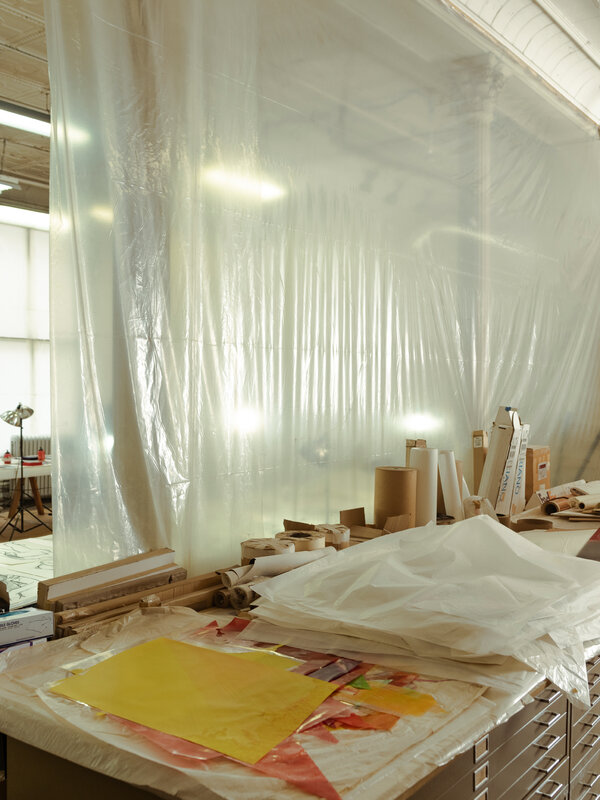 The trouble began around midday on Jan. 25, when Ms. Rockburne found water streaming in from the loft above hers, dripping into a large cabinet where she stored a lot of her work. The origin was curious, because the couple who had bought the place several months earlier for $8 million never seemed to be there.

At 88, Ms. Rockburne is aware of social media but she is hardly immersed in it, so it meant very little to her that the new occupant of unit 3WR was a man named Dick Costolo and that for several years he served as the chief executive of Twitter. The flood occurred on a Monday, her assistant’s day off, which complicated things. Alone, she could not lift or climb the ladder that would have taken her to the top of the storage space, where much of the rescuing effort was required. “From noon on I watched helplessly as the water poured down over the cabinet and onto my early work,’’ Ms. Rockburne told me. By the time her assistant was able to get to her, many of the pieces were already stained and disfigured.

In a complaint filed in State Supreme Court last week, Ms. Rockburne’s lawyers maintain that the problem would not have been so severe had the Costolos acted quickly. Told at 1 p.m. that there was a leak coming from his unit, Mr. Costolo insisted on using his own plumber, the suit claims, rather than allow someone the building could have provided, someone, Ms. Rockburne remarked, who would have been “budget.” As a result, the leak was not corrected until 6 that evening.

In an effort to assess the extent of the damage, she immediately got in touch with Adam Novak, a renowned conservator of modern art, who eventually determined that 176 pieces had been compromised by the flooding; at least 25 of them were beyond repair, according to the lawsuit. As a result, Ms. Rockburne is suing the Costolos for just under $2 million, $576,000 of which would cover the cost of restoration for the salvageable work, and $1.3 million for the pieces that were destroyed.

Although the Costolos did not respond to requests for comment, an email from Mr. Costolo excerpted in the complaint explains that a friend had been staying in the loft and used the shower in the guest bedroom, which had been dripping. A representative for Chubb, the couple’s insurer, said that the company could not comment on an active claim.

As time plods along, her lawyers maintain, artwork that might be fixed runs the risk of becoming irreparable. In an ideal world, Ms. Rockburne would have the pieces restored now and hope for reimbursement later. But, as she explained, she is without the extra half-million dollars that it would demand. Even with her place in the firmament — pieces bought over the years by MoMA, the Metropolitan Museum of Art, the Getty Trust, and work currently on display at Dia Beacon and the Pompidou Center — her wealth resides largely in her real estate asset, one she was fortunate enough to acquire in 1979, with the help of bank loans, when the building went co-op.

Obviously there are many artists of the same period who were not as lucky, either in terms of the recognition they received or the investments they were able to make. And yet it would be easier to find a billy goat on an expressway than locate anyone in SoHo who still lives the way Ms. Rockburne does — in perfect consonance with creative purity.

In place of a proper kitchen — instead of the 60-inch Wolf range with a companion set of wall ovens that you would ordinarily find in a loft of this size today — she has a row of white appliances that seem to date from the moment of her arrival. With the exception of a single small bedroom and a grouping of furniture covered either in bedspreads or drop cloths — I couldn’t tell — the space is entirely given over to her work.

Not long after I showed up, Ms. Rockburne walked me to the back of her studio, where she had laid out a series of black-and-white figure drawings that had been damaged. She had produced them in the early 1950s, when she was a student at Black Mountain College and her circle of friends included Robert Rauschenberg and Cy Twombly. Much of her work is inspired by the love of mathematics she developed while she was there, under the tutelage of the German theoretician Max Dehn. Ms. Rockburne continued to study equations her whole life. A decade ago, in her late 70s, she got a doctorate in math.

Over the many years she has lived in her loft, she told me, she and others in the building have spent millions of dollars on infrastructure and repairs — fixing the roof, the elevator and so on. When Ms. Rockburne first moved in, there was no heat on the weekends. What is often forgotten in conversations about the area’s transition from a place of artists to a place of bankers and technocrats is that the painters and sculptors and dancers who came first didn’t simply build it as a brand, they hammered and nailed SoHo to a point of livability. On my way out, we spoke about the prospects for the lawsuit. “I don’t want to compromise on the amount,’’ Ms. Rockburne told me. “Not by a penny.”

US troop decrease in Afghanistan 'not' tied to Taliban deal