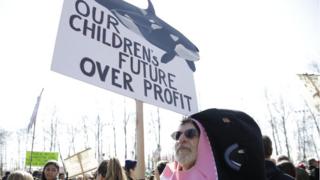 Canada recently spent billions on an oil pipeline in order to triple its capacity. But amid fierce opposition to Prime Minister Justin Trudeau’s plans, will the Trans Mountain project ever get built?

The Burnaby terminal of the Trans Mountain pipeline is quiet on an autumn afternoon.

Long gone is a ramshackle protest camp that sprang up at the entrance gate in February, its residents evicted and the camp torn down over the city’s concerns about safety.

The tank terminal, at the pipeline’s Pacific end, is also now free of protesters, though over 200 people were arrested this year for blockading the construction site. Nestled in suburban Burnaby, British Columbia (BC), there is little sign the pipeline project has become a battlefield.

The site is central to a fight over climate change and Canada’s economy, the environment and the oil sector – between those who argue the pipeline project could devastate the Pacific coastline and those who say it will fuel the economy for years to come.

The current peace is just a lull as sides regroup in the wake of a court ruling that dealt a blow to the project in August.

That federal appellate court decision quashed Canada’s 2016 approval of the project, saying regulators failed to adequately consult First Nations along the pipeline route and to fully account for the project’s impact on the region’s endangered killer whales.

The Texas-based energy infrastructure company agreed to sell the infrastructure amid myriad legal and regulatory challenges launched against their expansion plan.

It would add roughly 980km of pipeline, new pump stations, and expand the dock facility and pipeline capacity at the Burnaby marine terminal.

It would also increase oil tanker traffic on BC’s coast from five to up to 34 tankers a month, tankers that would carry the oil along from Pacific coast refineries to Asian markets.

Jim Leyden was one of many arrested this year for violating a court injunction that prevents protesters from obstructing work at the site.

Leyden, however, has no plans to plead guilty.

Susan Lambert, a former BC Teachers Federation president, was sentenced to a week behind bars for her part in the protest.

The retired teacher said she decided to take a stand “because of the critical point we’re at in terms of climate change”.

They are joined in their concern by some First Nations and environmental groups, which have led organised campaigns against the expansion.

The current BC government and the cities of Vancouver and Burnaby have also fought the proposal.

In October, Washington state’s governor said the project “runs counter to everything Washington state is doing to fight climate change, protect our endangered southern resident killer whales, and protect communities on both sides of the border”.

“There’s a wall of opposition here along the coast,” says Christianne Wilhelmson, with the Georgia Straight Alliance, which focuses on protecting the coastal waters.

One cause for for their concern is a potential oil spill in the Salish Sea, a busy inland network of waterways ranging from just north of Vancouver to Puget Sound in Washington.

The sea is also the home to an endangered killer whale species under significant threat from – among other factors – marine vessel noise.

Those whales captured the world’s attention earlier this year when a mother in one of the pods carried her dead newborn calf with her for some 17 days in an extended display of grief.

“That was such an eloquent and mute statement about the precipice we’re on,” says Lambert.

Since the court ruling, Canada has asked the National Energy Board (NEB), an independent regulator, to hold a new round of consultations with the 117 indigenous groups affected by the project and to take a second look at project-related marine shipping.

But pipeline opponents have little faith in this latest review, which they see as simply another path to yes for Trans Mountain.

The court decision is “not a victory, it’s just a reprieve. But the struggle continues”, Lambert says.

Patricia Mohr, an economist and commodity market specialist, puts the case for Trans Mountain this way: “Oil pays the bills in Canada, oil pays the rent”.

“Canada is a trading nation. We owe our relatively high per capita income, our economic prosperity to trade,” she says.

“It’s really important that we have international markets for some of our big volume product exports, and crude oil happens to be the biggest.”

Trans Mountain has its defenders, not least Prime Minister Justin Trudeau, who says Canadians don’t have to choose between a clean environment and resource development, and who launched an oceans protection plan prior to Trans Mountain’s approval to help shore up support.

He says expanding the pipeline is in the country’s national interest.

Canada, with its landlocked oil supply, sells almost all its oil to the US, getting a lower price for it than it would with access to global markets.

Trans Mountain would increase capacity to move Canadian oil to the coast, and from there to energy hungry markets in Asia and elsewhere.

In Alberta, anger and frustration has settled in. Trudeau was met by pro-pipeline protesters during a recent visit to the province.

Canadian crude oil have fallen to record lows and the “crisis” in the sector is linked to a lack of pipeline capacity.

The province is refusing to participate in Trudeau’s national climate plan until the project is approved.

“The idea of damning the lifeblood of your modern economy to us – as a resource sector-heavy country, as a resource-rich country – is irrational,” says Kris Sims, with the Canadian Taxpayers Federation, a low-tax advocacy group.

The Alberta government estimates that a lack of market access is currently costing the Canadian economy up to C$80m a day.

Stewart Muir, with Resource Works, a non-profit organisation that promotes BC’s resource sector, says: “Giving away our oil to the US is not only imprudent as an economic policy but also, I think, morally reprehensible to use non-renewable resources in such a careless manner”.

“You’ve got one shot to use that hydrocarbon molecule well, and we’re giving it away to Donald Trump and his friends for a huge discount.”

Advocates also note that shipping the product through a pipeline is generally safer, more efficient, and cheaper than by road or rail. They argue that the project can be built responsibly with environmental risks mitigated.

In the past few years, a number of oil pipelines projects have been proposed in Canada – Northern Gateway, the Energy East Project, Keystone XL and the Trans Mountain Expansion.

The two former project have been cancelled. Keystone XL and Trans Mountain are both on hold.

Mohr says the failure to get pipelines built has slowed investment in Canada’s oil sector.

“We need to prove to the international investment community – by which I mean particularly investors in New York and London – that we have the means to get our infrastructure put in place for what I believe is our most important industry,” she says.

Labourers too are feeling the pinch, workers who had banked on the long-term construction jobs Trans Mountain promised.

Christian Labour Association of Canada’s Ryan Bruce says some 3,000 of the union’s members had planned to work on the pipeline once construction got under way in earnest.

“Anytime you see a large number of jobs evaporate suddenly, it hits the economy, it hits small town British Columbia, it hits rural BC and rural Alberta where this pipeline was going to be passing through,” he says.

Grand Chief Stewart Phillip has a term for the Trans Mountain project: “a real stinker”.

He leads the Union of BC Indian Chiefs, which has been a strong anti-pipeline voice in the province.

“You cannot build a pipeline in a war zone,” he told journalists in October. “It’s impossible. You have to have the goodwill and the support, the social license. For indigenous people you have to have consent.”

But those communities along the pipeline are not unified in opposition.

Trans Mountain has signed 43 mutual benefit agreements with First Nations in BC and Alberta. The corporation estimates it will share in excess of $400m with them under those agreements.

Leaders who signed those agreements say they have built a partnership with Trans Mountain that will create opportunities in their communities for years to come.

The NEB launched its reconsideration hearings on 19 November. Its report is due in February, and both sides will be watching Trudeau’s next steps.

Sophie Harrison is with Dogwood Initiave, a BC political advocacy group that has organised against the project.

She says she is betting against the Trans Mountain expansion being built “but I do think it will be interesting to see how hard Trudeau is wiling to try”.

Sims, whose low tax group backs the project, though not the infrastructure and construction costs being transferred to the public, believes that if the Trudeau government can thread the needle, Trans Mountain will be eventually pumping more oil to the coast.

“There is that little window – it’s almost like the Millennium Falcon [scene in Star Wars] where it has to turn sideways and go through the pass. There is a gap of light there,” she says.

But she says the question is: “Do they really have it in them – the fire in the belly? Is it in their hearts to get this thing done?”

And Then There Was One: G.O.P. Defends Its Last Seat in Queens