MENTONE, Texas — Zoom in on the glowing red map of ever-escalating coronavirus cases in the continental United States and you will find one county that has been spared. Only one, from coast to coast.

Like a lone house standing after a tornado has leveled a town, Loving County, in the shadeless dun plains of oil-rich West Texas, has yet to record a single positive case of the coronavirus.

It is something that people in the county are proud of. They talk about it. They live by it.

“You can take that off!” Chuck Flushe told a visitor in a face mask at the window of his food truck as a pair of barefaced oil field workers milled about. “We don’t have the virus here.”

If only it were true.

Though never included in the county’s official reports, at least one positive test for the coronavirus was recorded over the summer at a local health clinic in Mentone, the county’s only town, according to a worker at the clinic.

The man lived at what everyone in this part of Texas calls a “man camp” — temporary housing for transient oil and gas field workers — near the center of town when he became sick. But since he was not a permanent resident, and was quickly shuttled home, Loving County never reported the case. Its record remained intact.

Ten months after the first infection was recorded in the United States, the coronavirus has made its way into every corner of the country. More than 11 million people have tested positive for the virus, which causes Covid-19, with more than 164,000 new cases emerging on Monday alone.

Now even rural areas, which escaped the brunt of the pandemic early on, have become serious centers of new infections. In recent months, a diminishing number of small, remote counties, including Loving County, remained the only places in the continental United States with no positive cases.

One by one, each has begun to record infections. The last besides Loving County to officially fall was Esmeralda County in Nevada, which reported its first case last week. (Kalawao County in Hawaii, which has even fewer people than Loving County, also has reported no known cases.) 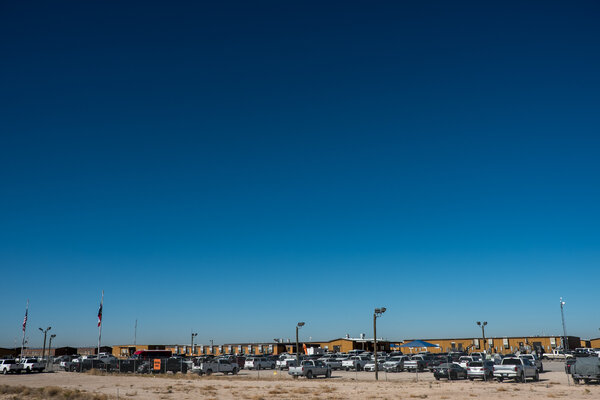 Those who live in Loving County full-time — the U.S. mainland’s smallest population, with no more than 169 people stretched across 669 square miles of sand, mesquite and greasewood — credit their relative antiviral success to the landscape and the sparseness of the population. They joke that they were socially distant before it was cool.

But despite the wide-open space, the county is busy. The census counts 10 times the number of workers in the county as residents. Trucks hauling equipment for the oil fields or big boxes of sand for fracking groan through town in a constant, noisy stream. Plastic trash and bits of blown truck tire litter the roadside.

When one drives through the county at night, lights from the oil and gas operations flicker brightly across the landscape, creating the mirage of a distant city that can never quite be reached. “You top that hill and it looks like you’re driving into Dallas or Fort Worth,” Mr. Simonsen said.

Men — and it is mostly men who work in Loving County — shuffle in and out of the only shop for miles, a relatively new convenience store where the line for beer and single-serving meals can stretch to the rear refrigerators during the 5 p.m. rush.

“Restrooms Coming Soon,” boasts an all-caps banner hanging outside. On a recent weekday evening, one shopper wore a cowboy hat. More had on mesh trucker caps. None were in masks. Neither were the clerks. The county is exempt from a statewide mandate.

But even if the virus is not front of mind in Loving County, it has changed life here.

The pandemic caused a downturn as oil prices dropped, reducing the number of workers in town. The man camps were less full. Hotel rooms that just months ago cost $350 a night in Pecos, the nearest large town, were now going for a third of the price.

“With the pandemic, a lot of stuff shut down,” said Ricardo Galan, 38, who works for a supply company that he said had dropped from 50 employees to 12.

Mr. Galan, from Eagle Pass near Texas’ border with Mexico, said he usually spent about 12 days working and then got four days off. He counted himself lucky to be only five hours away from his family. Some workers come from much further, like Utah or Louisiana.

While in Loving County, Mr. Galan lived in a man camp on his company’s property, sharing a small living space with another worker. He said the workers there practiced social distancing. “On our yard, nobody’s gotten sick from Covid,” he said.

But, he added, no one was being tested unless they had symptoms. “They don’t test you just to test you,” Mr. Galan said. For that, workers must travel to larger cities like Odessa or Midland.

A private health clinic offers coronavirus tests and performs around 20 per week, according to Anthony Luk, 28, a paramedic there. Mr. Luk, like most workers in the county, lives in a trailer — his is attached to the clinic — and stays for two-week stints between periods of rest at home in Lubbock.

During his time there, he said, the clinic has had two positive tests for the coronavirus: in August, involving the man camp near the center of Mentone, and another taken at a job site outside of Loving County.

The August case raised alarm at the county courthouse because clerks and other county workers often go to the camp for free lunch on workdays.

“We’re made very known when something like that happens here,” said Angela Medlin, 31, a deputy county clerk who moved with her husband and four children to Mentone last year. “I know of at least one guy who was sick, but they took him back to where he’s from,” she said, recalling the situation over the summer.

In town, residents draw a bright line between themselves and the visiting workers. Those who live in the county full-time treat one another like members of an extended family bubble.

At the courthouse, a square brick building from 1935, the doors are now locked to outsiders and the county employees do not wear masks. When someone comes to visit, like a landman looking into new oil or gas leases, the person must have an appointment and wear a mask.

A Halloween party for the children in town attracted about 60 people and included temperature checks at the door. People felt comfortable not wearing masks.

But there are few such gatherings in Mentone, where the county’s history of oil booms and busts can be read in hollow rusting storage tanks, empty corrugated homes and the cracked plaster of the only schoolhouse, unused for decades.

“When we got here, I said, ‘Punk, how long are we going to live in this godforsaken place?’” recalled Mary Belle Jones, 89, who moved to Loving County in 1953 with her husband, Elgin Jones.

There were rattlesnakes in the yard of their first home, she remembered, and a toilet out back. They had five children, moved to a bigger house, accumulated acre upon acre of land and never left.

Mr. Jones, known to all by his childhood nickname, went from the oil fields to become sheriff for nearly three decades. “He was known as the only sheriff in Texas you could call Punk and get away with it,” Mrs. Jones said.

Their children went to the local schoolhouse until the sixth grade. But it ran short of students, and then closed. Children now ride a bus at 6 a.m. to the next county east.

Several members of the Jones family stayed in Loving County. One son, Skeet Jones, is the top county executive. His sister is the county clerk. Mr. Simonsen, the county attorney, married into the family.

“She was spending more time here than she was at home so we decided to make the move,” Mr. Simonsen, a lawyer who last lived in Houston, said of his wife. “I knew there wasn’t a lawyer here in town, so.”

For Leroy Medlin, 33, moving to Loving County was the fulfillment of a dream. Not so for Angela, his wife, who had to be convinced.

“She was throwing a fit at just the idea of it,” he said, seated in a wicker recliner on his porch at the far edge of town, a cowboy hat on a table at his side.

Mr. Medlin, who was fired from his job as a San Antonio police detective for lying to justify car pursuits and later lost his job in town as a deputy sheriff, works as a cowboy on the Jones family ranch.

Some residents said they knew about cases of the coronavirus in the county, but because they were limited to visiting workers, the county still considers itself to be virus free — if on a technicality.

Most tests conducted in the county have involved oil and gas field workers, according to Mr. Luk, at the local clinic. And those would be recorded in the employees’ county of residence, not in Loving County, said Lara Anton, a state Health Department spokeswoman.

Were any permanent residents infected? Officially, that is still a no.

But Loving County residents concede that their perfect record is probably no longer perfect.

“To say that we’re the only place in the United States that’s never had a Covid case, I don’t think that’s true,” Mr. Simonsen said. “It’s a nice little bit of hype, but certainly it’s been here.”