Of all the complications of living in New York City, you might not imagine wild turkeys making the list.

But for years, growing flocks of them have held sway in a section of Staten Island where every day is turkey day.

While most Americans wrestle with a turkey only on Thanksgiving — brining, basting and broiling a frozen version of the species — residents here tangle with them year-round: on lawns, wandering the streets, roosting on parked cars.

But soon Staten Island’s wild turkeys will roam here no more. They, however, will meet a far more pleasant fate than their dining-table-bound counterparts.

The estimated 250 turkeys that have staked their claim to the neighborhoods of Ocean Breeze and Dongan Hills just south of the Verrazzano-Narrows Bridge will be trapped and removed over the next few months to a wildlife sanctuary in upstate New York.

It is an ambitious roundup — previous removal attempts have ensnared only a fraction of the flock, leaving the remainder — leftovers? — to repopulate and bounce back even stronger.

“If we don’t get all of them, it’s just going to keep happening,” said Steven Matteo, a New York City councilman who represents the neighborhood and who helped secure $100,000 in city funds for the latest removal attempt.

The turkeys, which can grow up to three feet high, are a major source of constituent complaints, said Mr. Matteo, who routinely gets updates and notifications by email.

Older residents, he said, tend to call to report aggressive turkeys on the lawn or roosting in their trees.

It is illegal to kill the turkeys or remove them without a state permit. Mr. Matteo said he expected to obtain the necessary permits.

On Tuesday afternoon, more than two dozen of them clucked, flapped, gobbled and stopped traffic on Seaview Avenue near Staten Island University Hospital, on whose grassy grounds the turkeys are a constant presence. 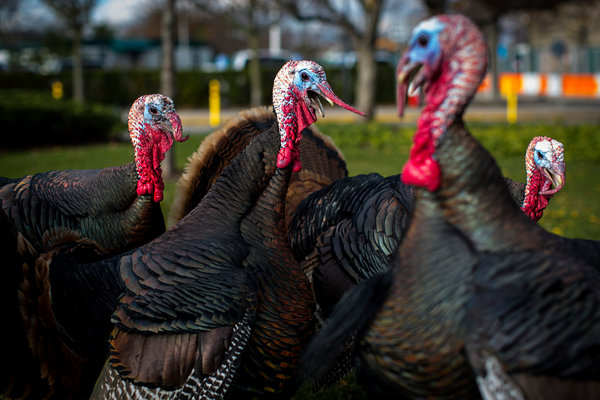 “I thought I was seeing things. It’s quite unbelievable,” Mike Pidoto, 58, a security worker who was visiting the hospital, said. He had to honk at the turkeys and nudge his car through the flock.

Staten Island residents are strongly divided over the turkeys. Some homeowners and drivers call them an aggressive nuisance.

“This is a terrible bird,” said Mohammed Imam, 65, who runs the Big Yellow Grill food truck outside the hospital.

As their numbers have increased, so has their boldness for begging food from his customers, he said, sometimes grabbing food out of the hands of children.

“They grab kids’ hot dogs. This is not right,” Mr. Imam said. “They should do something. They have to do something, this stupid bird.”

But others consider the turkeys — which may have grown out of a small group released more than 20 years ago on the grounds of the nearby South Beach Psychiatric Center — quirky mascots of the neighborhood.

Jeanette Liubicich, a nurse, spoke of the turkeys in almost heroic terms and called the city’s plan to remove them “disgusting.”

Rasheen Taitt, 43, a mechanic, said the turkeys bring “flair” to the neighborhood, adding, “Where else can you see this in the city?”

On Seaview Avenue, the turkeys were blocking an ambulance, which tried to disperse the flock with its siren. This backfired, as five more turkeys came running over to join their obstructive feathered friends.

Lou Tobacco, an associate executive director at Staten Island University Hospital, said the turkeys often get in the way of employee and visitor vehicles.

“We’re fortunate that there’s not been a major car accident,” he said. “They just stop in the middle of the road. They’re not afraid of cars.

“They rule the roost, pardon the pun,” he added. “They walk around the grounds, the parking lots.’’

Mr. Tobacco said the turkey’s droppings get tracked into the hospital, and “during mating season, they get very aggressive and violent,” sometimes charging at people.

“That’s the last thing you need: You visit a loved one, and you get chased by a turkey,” Mr. Tobacco said. He recalled past removal attempts that involved wildlife handlers trying to lure turkeys into traps with cornmeal.

“I told them, ‘These are Staten Island turkeys. You have to put a mozzarella sandwich or a slice of pizza in there,’” he said.

The goal this time is to catch the turkeys and relocate them to And-Hof Animals, a wildlife sanctuary in Catskill, N.Y., that is already home to 160 turkeys from Staten Island that have been sent there by wildlife handlers in recent years.

They live on an eight-acre, fenced-in “turkey kingdom” in the woods, the sanctuary’s founder, Kurt Andernach, said.

Unlike earlier roundups that went uncompleted in part because funding ran out, Mr. Andernach said he believed the funding this time would ensure a complete job. The effort would entail setting up “large, humane traps” with remote-controlled doors that can be closed when turkeys wander in to eat the grain left inside.

Mr. Andernach said the Staten Island turkeys fall somewhere between being wild and being domesticated like those raised on a farm for food. Releasing them into the wild would be a death sentence.

“For example, they might consider a coyote a friend, just like schnauzer down the block,” he said.

Some Staten Islanders, like Eric Britt, 62, who works at Staten Island University Hospital transporting patients, remained dubious that all the turkeys could be trapped. Earlier roundups, he said, missed some birds, which then laid eggs and reproduced quickly.

“They were hatching them faster than they could get rid of them,” he said. “It’s a waste of money.”

He jokingly entertained the notion of eating a few for Thanksgiving.

“I’d have to marinate them,” he said. “Because I know they’re tough.”

The idea also occurred to Robert Renaud, 56, whose path was impeded by six turkeys on the sidewalk.

“Thanksgiving is coming, and I wouldn’t mind one right now,” he said.

Asked about this, Mr. Andernach advised against it.

“You would not want to eat them,” he said. “They don’t have a lot of meat or a lot of flavor.”