Since 1936, gliding on the ice at Rockefeller Center in the presence of golden Prometheus and a 75-foot Christmas tree, or watching others do so, has been a New York holiday tradition.

The good news is that it will be possible again this year. The famed ice skating rink in Midtown Manhattan will open on Nov. 21, right before Thanksgiving, with tickets going on sale Nov. 12, and the number of skaters limited to facilitate social distancing.

The bad news: The skating season will include the major winter holidays, but that’s about it. The rink will close on Jan. 17, several months early, right when New Yorkers, many of them enduring the pandemic in their apartments, will need outdoor recreation the most.

The early shutdown is because of a long-planned renovation of the sunken plaza and the underground shopping concourse surrounding it. Tishman Speyer, the owner of Rockefeller Center, has plans to “democratize” the area, said Rob Speyer, president and chief executive. Some preservationists, however, do not support all the changes coming to the famous Art Deco complex, calling them commercially motivated.

And the shortened season would appear to fly in the face of calls by public health experts for New Yorkers to spend time in the open air. “If I’m going to an outdoor skating rink, the risk is lower than most of the indoor activities, like going to the gym,” said Dr. Waleed Javaid, the director of infection prevention and control at Mount Sinai Downtown Network.

But Mr. Speyer says the short-term pain will result in long-term gain in the plaza area. “We want to make it completely accessible to people,” he said. 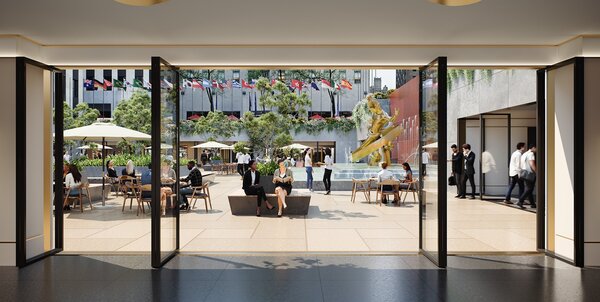 Until recently, concourse restaurants occupied the north and south sides of the rink, providing front-row seats to those who could pay for the privilege. Everyone else in the underground area had less chance of glimpsing the action on the ice.

Those restaurants are now gone. The area immediately around the plaza will be made fully publicly accessible. The concourse will be spruced up. “Everyone will have that opportunity to press their noses against the glass,” Mr. Speyer said.

The current windows in the granite walls surrounding the plaza will be replaced by large, pivoting storefront-style windows, which will bring more natural light into the concourse, according to Gabellini Sheppard Associates, the architects of the plan.

In warm weather, the storefront windows will open, and people will be able to go back and forth easily between the concourse and the plaza, enjoying the sort of indoor/outdoor experience that had grown popular before the pandemic and that is, of course, even more important now because of the health crisis.

The massive granite “credo” plaque to John D. Rockefeller Jr., added at the top of the staircase to the plaza in 1962, will be relocated. The staircase itself will be tweaked in a manner intended to encourage people to flow down to the sunken plaza.

The alterations to the plaza and concourse are part of a raft of changes planned for Rockefeller Center’s interconnected central public areas.

Rockefeller Center is a city landmark, so the changes had to be approved by the Landmarks Preservation Commission. And because the complex is a beloved architectural masterwork, preservationists scrutinized the proposal.

Some objected to the plan to redo the terraces overlooking the sunken plaza, with their fountains set in niches. The historic design will be demolished; in its place will be a new landscape vaguely reminiscent of the original and featuring long granite benches. The elevators to the concourse will be replaced by modernist ones, and new staircases will be added.

“It is simply a commercial gesture to get people down some new steps to the concourse,” said Carol Krinksy, a professor of art history at New York University and author of a book on Rockefeller Center. “I don’t want them to do that to my center.”

The complex, which normally is home to some 18,000 office workers and attracts countless tourists, has, like the rest of Midtown, not been its usual bustling self since the coronavirus outbreak. Business has fallen off in the retail shops. And although the number of workers on the campus has inched up since the summer, the office buildings are still only about 13 percent occupied, said Iva Benson, a Tishman spokeswoman.

But Rockefeller Center seems to be in good shape financially; nearly all office tenants have been paying their rents, Mr. Speyer said. Some retail tenants have renewed or expanded their leases, he continued, while other businesses have signed new leases.

During warmer weather this year, Tishman set up tables in the plaza, and there were pop-up restaurants. Because of the outdoor dining, Tishman pushed back the opening of the rink, which usually happens on Columbus Day weekend. So the skating season is being squeezed on both ends.

When Rockefeller Center opened in 1933, the rink wasn’t part of the plan. It was added to enliven the plaza in winter. And it worked.

“Think of all the wonderful public spaces we have,” said Kent Barwick, the former president of the Municipal Art Society, a preservation group, who was chairman of the Landmarks Preservation Commission when it initiated the designation of Rockefeller Center. “Not many are oriented to the cold weather months.”

That may make the rink’s abbreviated season all the more crushing.

But Sibyl McCormac Groff, known for her Christmastime tours around Rockefeller Center, said she did not fault its owners. “Sometimes we have to do these things to move forward,” she said.

Ms. Groff even suggested that the pandemic might be a good time to get the work done, since the number of visitors is down.

“And hopefully the tourists will come back.”