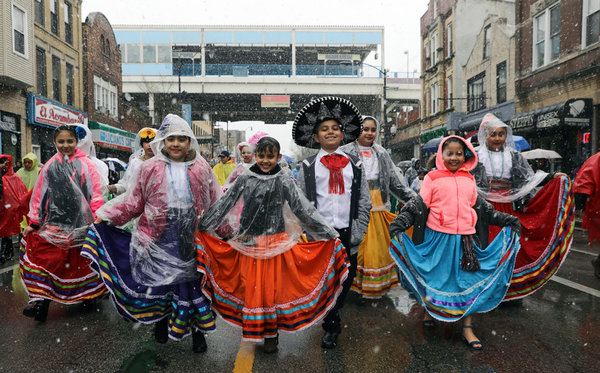 President Trump has turned repeatedly throughout his tenure and his re-election campaign to two targets: immigrants whom he has described as “invading” the country, and American cities he has called out of control.

Through his language, the two are linked. His foils are depicted as violent and infested, and in some deep sense at odds with American values.

But to the extent that each presents real policy challenges — how to integrate foreigners, what to do about struggling places — cities and immigrants are intertwined. The president’s two oft-cited problems have historically been solutions to each other.

“There’s this symbiotic relationship that immigrants need cities in order to acclimate to a new society, and cities need new immigrants,” said Jacob Vigdor, a professor of public policy at the University of Washington.

His research at the county level has shown that immigrants increase home values in sagging markets, and their arrival encourages U.S.-born residents to follow, spurring population growth where it had been declining. Other studies have shown that some of the biggest urban crime declines have been in neighborhoods where new immigrants have arrived. That’s most likely because foreign-born residents have lower crime rates than native-born ones, and their population growth in neighborhoods previously full of vacant properties can help restore eyes on the street.

One implication of this is that immigration can help address the problems of urban crime and decay that the president has lamented in cities like Chicago and Baltimore. Put another way, the president’s immigration policies — rooted in the belief that America has run out of room for even legal migrants — threatens the cycle of how cities rejuvenate themselves.

The last 40 years offer a vivid example of how this symbiosis has worked in America. A.K. Sandoval-Strausz, a historian, recounts the period in a book out in November, “Barrio America,” that argues that Hispanic immigration during this era helped save many American cities.

Population is at the city level. Some city population growth is attributable to annexed land. Asians were not identified as an independent category in the 1970 and 1980 censuses, so are included here in “other.” The census began to ask about Hispanic identity in 1980. The 1970 Hispanic data shown here was estimated using Hispanic indicators in IPUMS data.

The accelerating arrival of Hispanic immigrants in the 1970s came at a fortunate moment for many American cities. White flight had taken hold. The Great Migration of African-Americans out of the South was winding down.

“In a way, it’s a twofold historical accident,” said Mr. Sandoval-Strausz, a professor at Penn State. Domestic demographic trends left cities in need of people (and businesses, and tax revenue), just as major new waves of immigrants began to enter the country after the immigration overhaul of 1965.

In Chicago and Milwaukee, new Hispanic residents blunted population losses. In Boston and Oakland, their arrival helped reverse population declines. In booming cities like Los Angeles and Houston, Hispanic population growth has explained the entirety of the boom.

Between 2000 and 2010 in 76 of the country’s 100 largest metro areas, Hispanics contributed more than any other racial or ethnic group to city population gains, or reduced population losses, according to “Diversity Explosion” by William Frey, a demographer. This Hispanic growth in cities has mattered all the more as African-Americans have increasingly moved to the suburbs, too.

Today, Mr. Sandoval-Strausz says too much focus has been placed on the white, college-educated “creative class” for resurrecting American central cities. It was Hispanic immigrants, he said, who rebuilt the housing in places like Dallas’s Oak Cliff neighborhood, and who revived the commercial district in Chicago’s Little Village (making such places more desirable to everyone else).

The “creative class” itself depends on immigrants. They staff the restaurants, gyms, dry cleaners, florists, nail salons and cafes that have helped lure educated residents back to cities. They provide the child care that makes dual professional-parent households possible, and they carry out the renovations and housing construction that newly prosperous cities have seen.

During much of this time, many city officials appear not to have understood what was happening, Mr. Sandoval-Strausz argues. They were focused on constructing highways, parking garages, new housing developments and indoor malls — suburban-style amenities to lure back white families who had moved away.

“Cities spent decades trying to figure out, ‘How do we get those people back,’” he said, “as opposed to asking, ‘Who are these new people?’”

And yet, this process is an old one. Urban neighborhoods and jobs have repeatedly been restocked as one group — the Irish, Italians, Chinese, Mexicans — moves in, prospers and moves away, to be replaced by newer arrivals.

Democratic candidates for president have nodded to this rationale for immigration, but it’s likely to become more prominent as the general election approaches.

“The only reason that South Bend is growing right now, after years of shrinking, is immigration,” Pete Buttigieg, mayor of the Indiana city, said in the third presidential debate. He has proposed “community renewal visas” to steer immigrants to places that need them most.

This cycle of renewal works, Mr. Vigdor suggested, not only because immigrants are willing to do jobs Americans may not want, but also because they’re willing to accept living standards Americans won’t, in a tenement apartment or a run-down neighborhood, or in a city that has been emptying out.

If the recent immigrants Mr. Sandoval-Strausz describes move up and out, too, and there isn’t a next wave to replace them, cities much larger and more prosperous than South Bend would have reason to worry.

Quoctrung Bui is a graphics editor and covers social science and policy for The Upshot. He joined The Times in 2015, and previously worked for National Public Radio covering economics and everyday life. @qdbui