Home » Americas » The Last of the Old-School Cabaret Artists

In the mid-20th century, cabaret clubs in the city made glamorous interiors, virtuosic singers, and beloved standards available to anybody with pocket money. Before they were stars, performers like Barbra Streisand and Harry Belafonte played rooms of just a few dozen tables. Cover charges were infrequent, so middle-class couples could make up much of the audience, according to “Intimate Nights: The Golden Age of New York Cabaret,” by James Gavin.

This enchanted world has largely vanished. Cabaret persists, but mostly as a passion project or side gig, and often with quite a different musical repertory. Only a handful of performers still make a career out of interpreting the Great American Songbook on a small stage in a smoking jacket or a sequined dress.

But if anyone can still conjure cabaret’s glory days, it’s Steve Ross. Now 80, Mr. Ross remains devoted to playing Cole Porter and wearing bow ties. He continues to accompany himself on the piano, the same way he did every night at the Algonquin Hotel’s Oak Room from 1981 to 1984.

This was the era when Mr. Ross was known as “the Crown Prince of Manhattan’s piano bars.” His act has drawn the likes of Stephen Sondheim, Tennessee Williams, Ethel Merman and Lauren Bacall. “He sings songs we’ve known all our lives, but he makes me listen to them as though I’ve never heard them before,” Mr. Gavin said.

Ross’s next gig will be at Birdland, in Midtown Manhattan on Dec. 17 and 18. He will perform songs from his new holiday album, along with some standards.

This is an edited and condensed version of a recent conversation with him. 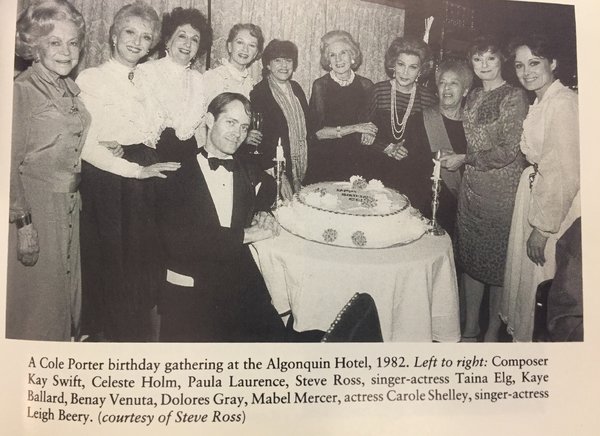 A. I started off with one of my great loves, which is ragtime. Ragtime had a big vogue in the early ’60s. Then I worked in cocktail lounges and nice hotels. I played standards and show tunes. You’re looking at someone that time passed by. The ’60s with all the turmoil — I was aware of them but I didn’t play much of the Beatles or Dylan. It just wasn’t my style.

The ’30s was the gold mine. I will always play “Always.” I think it says something perfectly. When I play “Night and Day,” I still get a little frisson.

How did you get established in New York?

I went into the seminary for a couple of years. That didn’t work out. I was in the army. Then I was in Washington, playing at a couple of bars, not particularly focused. I was going to therapy. When I noticed the therapist was dozing off, I thought perhaps the time had come for me to make a move in my life. So I took my $200 or whatever it was and found a room on West 76th for $35. That was in 1968.

I gave myself a minimum. I said, “If I go below this money in my hand, I'll have to go and work as a clerk or something.” I signed up for a temp agency job. And I was going to a gay bar called the Candy Store on West 56th Street, which served very bad Italian food — a lot of the gay bars in those days had Mafia connections — but it had a wonderful pianist. The guy running the bar said, “Would you like a job?” Because I had sat in for the pianist a few times. I said, “Yeah!” The next day I was supposed to go down to Wall Street and file in as a clerk. I just nicked it, and never had to do anything but music.

Your first big job was at a club called Backstage. It is revered among cabaret aficionados. What made it so special?

The guy who ran it was very flamboyant but a very canny businessman, Ted Hook. He had danced in Vegas and in the movies. He wanted to open this theatrical restaurant. He knew everybody. This was the late ’70s. Many of the great stars were still around. He had the very clever idea to meld the public and the stars — everybody wants to see stars and celebrities and all that. He was very lavish in giving drinks to all the people who were in the shows.

It was a big, big step for me, because all these stars would come up and sing.

Would you accompany them on the piano?

Oh, yes. I remember Ginger Rogers coming up. She was there for the 50th anniversary of “Girl Crazy.” She still looked great. I said, “Oh, Mrs. Rogers, what would you like to sing?” She said, “Well, I think I should sing ‘Embraceable You,’ don’t you?” I said, “Yes. What is your key?” All I can remember is this beautifully manicured finger. “You know, I don’t know my key, but this is my high note.” Bong! She played it. “You figure it out.”

What does it take to master the Great American Songbook?

Well, you know Mabel Mercer always said, “I look at the lyric first.” And that’s what I do, too. If the lyric is a strong one, or if I can connect with the ideas in that lyric, then even if the music is not up to it, you can kind of make the music work.

These lyricists — you have Yip Harburg and Ira Gershwin and Cole Porter — they wrote with great meticulousness, with great art and great craft. And I am honored to serve them. That’s how I really feel. I am a song ambassador.

Was there someone in New York who took you under his or her wing?

I found my own way. I played in these bars. I met people, they suggested songs and little by little my repertory got better.

I realized that the personalization of the song was the key. If I sing “Over the Rainbow,” it’s my singing with my life and my voice and my experience. I’ve never been intimidated by that.

There was, however, a rather tense moment in one of these bars. I love Janis Joplin because I love funky blues. I thought she was just so raw and terrific. So I said, “I guess if I sing it truthfully, I could sing a Janis Joplin song.” That was my theory. I tried and got halfway through “Piece of my Heart.”

The audience looked around like, “What are you doing?” So I went back to Cole Porter.

Are there new cabaret performers you admire?

I heard a fantastic cabaret act two nights ago at 54 Below. It was Christian Holder. He was a dancer and then became a singer and cabaret act. The chances that he took — he sang a lot of songs we all know — and he made those songs totally part of his story. I continue to be impressed and inspired by audacity.

Are there popular misconceptions about traditional cabaret music among young people?

If I do a college class, I’m always tickled by the fact that young people have never heard someone sit at a piano and sing a funny song. They know about scabrous humor, and they know about really funky humor from the comedy clubs, and the shock humor. But to hear someone with wordplay and situational, non-X-rated humor — they are delighted that they are amused by it.

When I perform in London, I’m always gratified to see that there tends to be a younger crowd, because there’s a sense of occasion in the culture. And it’s a verbal culture, which is why I was drawn to England in the first place.

What are your favorite spots in New York?

There is some fantastic urban lighting of skyscrapers in Midtown. Have you noticed that? When you light all their details, these buildings become temples.

The Landmark Tavern is a great place. You’ll want to visit it — the wood-burning fireplace. It’s from the 1860s.

Of course one laments some changes, but you have to be careful about that. There’s a wonderful line in a Noël Coward song called “I Went to a Marvelous Party”:

“We talked about growing old gracefully

Said, ‘A) It’s a question of being sincere

And B) if you’re supple you’ve nothing to fear

Then she swung upside down from a glass chandelier.”

There is a great kernel of truth in that.

'The smell of dead bodies is everywhere, it's in the water…'