Home » Americas » The man who stuck up for insects 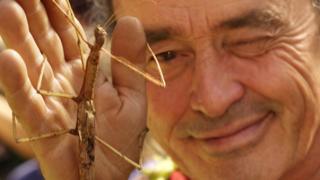 Brossard, who has died aged 79, gave up a career in law to travel the world and collect more than 250,000 specimens, a collection that would eventually become one of Montreal’s most visited tourist attractions.

He inspired millions through regular TV appearances, raising the profile of tiny creatures he believed were misunderstood and undervalued in human society.

One particular journey to find a rare insect – an extraordinary trip into the Mexican rainforest – would go on to inspire a film.

Georges Brossard was born in 1940 into a farming family in La Prairie, Quebec. His father, Georges-Henri, founded the nearby city of Brossard, on Montreal’s South Shore.

In a 1989 interview he described the La Prairie of his childhood as “a beautiful, unspoiled place” and recalled how a school science class inspired him to start his first collection of insects.

“In a cupboard at school there were two specimens for our science class, a butterfly and a chunk of asbestos,” he said. “I could gaze at them for hours. I guess that’s when I became attracted to insects.”

Even the destruction of that early collection – by ants and spiders – only inspired him to greater things.

“When I saw my collection in ruins like that, it hit me like a bolt of lighting. I knew that eventually I would be a great international collector. I saw my insectarium. I saw myself standing there explaining the world of insects to people,” he said.

His plan took a while to come fruition. Brossard went on to study law at the University of Ottawa and became a notary – an official witness to the signing of contracts, agreements and other legal documents.

But by his late 30s he had decided to devote his career to his great passions – entomology and the environment.

Read about other notable lives

Brossard and his wife Suzanne, who survives him along with his three children, travelled the world. By 1985, he had collected 250,000 specimens of insects from more than 100 countries.

“I would take off for six months at a stretch, and I had plenty of time alone,” he said in the book Notaries of Today by Daniel Bouchard.

“I would spend my time reflecting, taking notes, writing, studying. I began thinking about going back to school, especially to study science. I told myself that of all the animals on Earth, insects must certainly be the ones that do the most for humans. They produce honey, silk, wax, shellac and dyes. They pollinate plants. And yet they are the most hated animals, the most misunderstood. We hunt them down with insecticides and fungicides. That’s why I decided to stick up for them. At first, I wanted a huge collection with all the insects in the world.”

In 1985 he approached the then-mayor of Montreal, Jean Drapeau, and told him he would like to create an insectarium in the city.

The mayor put him in touch with Pierre Bourque, the then-director of the Montreal Botanical Garden, and they started work to raising funds for the project. In 1987 Brossard donated his collection to the city and a permanent exhibition at the botanical garden site opened in February 1990.

The insectarium has since become a huge visitor attraction. In 2017 the Montreal Space for Life network, which includes the insectarium, biodome, planetarium and botanical garden, saw a record 2.2 million visitors.

Brossard was director of the insectarium for 10 years and went on to found other such facilities around the world including in Shanghai and New Orleans.

A passionate communicator, Brossard took his contagious enthusiasm to a wider audience as a host on TV nature programmes, including the Discovery Channel’s Insectia, which was shown in 150 countries.

One of the most extraordinary chapters of his life came in 1987 when he was contacted by the charity Children’s Wish Foundation.

Six-year-old David Marenger – an avid butterfly collector – had been diagnosed with terminal brain cancer and his great wish was to capture a Blue Morpho – one of the largest butterflies in the world, with a wingspan of up to eight inches (20cm).

“I took him to Mexico, because it’s the closest place where the blue butterfly flies,” Brossard told the BBC in 2010.

David was so weak he had to be carried through the rainforest on Brossard’s shoulders but they eventually found one of the iridescent butterflies. On his return to Canada, the boy’s cancer went into remission and he began to get better.

The story was used as the inspiration for the 2004 film The Blue Butterfly, starring William Hurt.

David later wrote a book about his experiences called On the Wings of the Blue Butterfly. He said that as a child who was passionate about butterflies, he saw the Blue Morpho as a magical creature that could fulfil all his wishes. He credited hope, belief and perseverance for his recovery.

Helping children, particularly those who were disadvantaged, was a cause close to Brossard’s heart and he supported several charities.

At the opening of a butterfly exhibition in 2012, he told his audience: “Of all the animals that live on Earth, it is certainly the butterflies that exert the greatest fascination with humans, but especially with children.

“They are beautiful and graceful, but, alas, they are fragile. And that may be why children identify with them so much. For them, the butterfly is like a fairy who carries their dreams away.”

Brossard’s work and philanthropy led to him being awarded the Order of Canada in 1999 and being made a Knight of the National Order of Quebec in 2006.

Charles-Mathieu Brunelle, director of Space for Life, told Radio Canada that they would continue his work “with passion”.

The insectarium is currently closed for a major expansion – which it describes as a “metamorphosis” – and is due to reopen in the summer of 2021. Pierre Bourque, the former director of the Montreal Botanical Garden, has suggested the new building be named after Georges Brossard.

Anne Charpentier, director of the botanical gardens, told the BBC that Brossard had made millions of people more aware of the environment and the fascinating world of insects.

“His legacy is immense and memories of him will forever be tied to the mission of Space for Life,” she said.

Brossard always maintained that humans could learn a lot from the insects he loved so much. “Insects have found a way of life which humans have not done yet,” he told the BBC.

“They know how to utilise life, nature, and they render it to their successors, which is not the case for humans. We’re going to leave in a state that’s totally spoiled.”