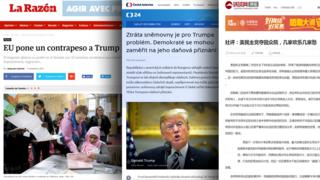 The world’s press has been digesting the results of the US mid-terms, which saw the Republicans lose the House of Representatives but consolidate their grip on the Senate.

Many have been asking what that means for President Trump – here is a round-up from BBC Monitoring.

“The triumph of the opposition will define the wall, impeachment and migration,” the regional Mexican daily La Razon says. It quotes political expert Manuel Martinez as saying President Trump “knows that without the majority he will have to learn to give in, the way he already did when did not manage to find the funding for the wall with Mexico”.

The victory of Democrats in the House “will have a huge impact on the government of Donald Trump within the next two years”, commentator Solange Marquez Espinoza says in her blog on the website of the centre-right Mexican newspaper El Universal.

“Migration policy, in particular the separation of the families on the border, will be another topic which Democrats in the Congress will try to abandon or put a stake on a migration reform that will benefit millions of migrants in the country without documents,” she suggests.

“A political era is over in Washington,” says Italian centrist daily Stampa, adding the result shows “it is possible to beat Trump in 2020”. Liberal La Repubblica notes the voters have delivered a negative verdict on the president but that forecasts of a considerable Democratic comeback failed to materialise despite “street protests and celebrity statements”.

It is a “defeat Trump can live with”, concludes German centre-right daily Frankfurter Algemeine.

But “four out of five Americans fear the hostile atmosphere could lead to violence” amid deep polarisation of society, reports Czech business-oriented Hospodarske Noviny newspaper.

German liberal weekly Die Zeit agrees, saying in an article headlined “Hatred and malice remain electable”, that the election “mirrors the division in society which Donald Trump has widened”.

The House of Representatives with a Democrat majority means the president will be held to account, commentators agree, but they see impeachment as unlikely. The Democrats “may well never commit to a delicate path” such as impeachment, “but their power to harass is great”, French private BFMTV says.

The election saw to it that the “so-called Republican moderates, the critics within the party, have disappeared from the House of Representatives,” Czech TV’s correspondent observes, while BFMTV quotes Olivier Piton, a lawyer specialising in French and US public law, as saying that the president has “won the battle of ideas” and the right-wing camp has no option but to realign with him.

An analysis in the Irish Times says that as Donald Trump prepares for a new phase of his presidency, a Democratic majority in the House could actually aid him politically in 2020.

“As a combative president who thrives on division, the president may be happy to use the Democratic-controlled House as a foil, blaming Democrats for not allowing him to achieve many of his campaign promises,” it says.

Influential Russian business daily Kommersant notes that, whatever the outcome, the elections “will not settle the main domestic problem, the polarisation in the US society”.

Even before the results were known, Kremlin spokesman Dmitry Peskov predicted that they would not “further complicate relations” between Russia and the US as they were “pretty difficult anyway”.

Arab media focus on the election of two Muslim women – Somali-American Ilhan Omar and Palestinian-American Rashida Tlaib – to the Congress. The Saudi-funded pan-Arab Al-Arabiya TV ran a profile on Omar entitled “From the refugee camps to the Congress, that is how Ilhan Omar has celebrated”.

Tlaib’s achievement is hailed by Palestinian mainstream media and social media users, most of whom highlight her family roots.

With the Democratic majority in the House, the Iranian domestic rolling news channel Irinn sees “the project of impeaching” the president already “under way”.

“Even if they do not succeed, he [Trump] will not be able to go on a rampage as he did two years ago,” it says.

“The impact on Sino-US relations looks minimal,” says an editorial in the nationalist Chinese newspaper Global Times. “It is because… the Democratic Party never attacked Trump’s trade war with China during electioneering. They are also even more high-profile on human rights issues.”

“Chinese people need not hold any expectation on the changing political atmosphere in the US,” it adds. “We cannot count on a choice made by the American voters to protect our interests.”

Top state media outlets in China like Xinhua news agency or the People’s Daily newspaper have not reported prominently or offered any commentary on the mid-term elections at the time of writing.

The Japanese government said it would be working to strengthen co-operation under President Trump “in a variety of fields”, describing the US-Japan alliance as “unshakeable”.