Home » Americas » The Report on Cuomo and the Calls to Resign: What to Know

Weather: Overcast most of the day. High in the upper 70s. 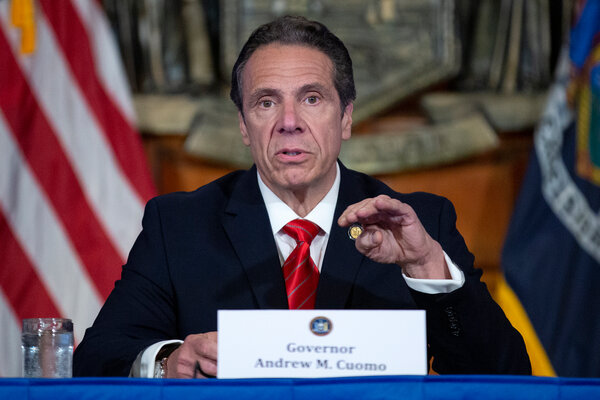 The findings of the investigation had been highly awaited.

On Tuesday, they were released: Gov. Andrew M. Cuomo sexually harassed 11 women, including current and former government workers, in violation of state and federal laws, according to a report from the New York State attorney general, Letitia James.

Mr. Cuomo said in response that “the facts are much different from what has been portrayed.”

“I never touched anyone inappropriately or made inappropriate sexual advances,” he said. “I am 63 years old. I have lived my entire adult life in public view. That is just not who I am, and that’s not who I have ever been.”

Here are a few things to know:

Investigators said 11 women had accused Mr. Cuomo of a range of inappropriate behavior, and that nine of them are current or former state employees. At least two had not previously spoken publicly: A female state trooper on Mr. Cuomo’s protective detail and an employee of an energy company.

[Read more from our full coverage of the investigation — and see a copy of the report.]

The report says Mr. Cuomo “sexually harassed” the unnamed trooper “on a number of occasions” after she joined the detail, including running his hand across her stomach when she held the door open for him at an event in 2019 and running his finger down her back in an elevator. “I felt completely violated,” she told investigators.

The National Grid employee, Virginia Limmiatis, told investigators that Mr. Cuomo touched her chest and brushed his hand between her shoulder and breasts at an event in 2017.

[Read more of the accounts: the state trooper, Ms. Limmiatis and the other women.]

The Albany County district attorney said on Tuesday that he is conducting a criminal investigation into Mr. Cuomo’s actions.

The demands for a resignation grew.

The calls for Mr. Cuomo to resign were loud on Tuesday. They came from people including President Biden, House Speaker Nancy Pelosi and every Democratic member of Congress from New York State.

Mr. Cuomo disputed the attorney general’s findings and showed no inclination to step down.

The findings could fuel support for impeachment proceedings.

The speaker of the State Assembly, Carl E. Heastie, held an emergency meeting with fellow Democratic members on Tuesday. Mr. Heastie said in a statement that it was “abundantly clear” that Mr. Cuomo had lost the support of the Democratic majority in the Assembly and could no longer serve as governor.

The Assembly has the sole power to impeach Mr. Cuomo, a process that would be overseen by Mr. Heastie.

Many who spoke at the hourslong meeting said they believed there was enough evidence for the Assembly to move quickly to draw up articles of impeachment, though no timetable was set.

Here are a few other stories from my colleagues on Mr. Cuomo, his future and the report:

Under Fire and Alone, Cuomo Fights for His Political Life

Hands Off the Library’s Picture Collection!

Summer isn’t over yet. Stay up to date on the best things to do, see and eat this season. Take a look at our latest newsletter, and sign up here.

A 91-year-old man was found dead in a Bronx building. He was bound and appeared to have been beaten, the police said. [Daily News]

The tight parallel-parking job ignited furor on social media after a photo was posted on Twitter. Here is the back story. [Curbed]

Results of an independent investigation. An independent inquiry, overseen by Letitia James, the New York State attorney general, found that Mr. Cuomo sexually harassed multiple women, including current and former government workers, breaking state and federal laws. The report also found that he retaliated against at least one of the women for making her complaints public.

Nursing home death controversy. The Cuomo administration is also under fire for undercounting the number of nursing-home deaths caused by Covid-19 in the first half of 2020, a scandal that deepened after a Times investigation found that aides rewrote a health department report to hide the real number.

Efforts to obscure the death toll. Interviews and unearthed documents revealed in April that aides repeatedly overruled state health officials in releasing the true nursing home death toll over a span of at least five months. Several senior health officials have resigned in response to the governor’s overall handling of the virus crisis, including the vaccine rollout.

Will Cuomo be impeached? On March 11, the State Assembly announced it would open an impeachment investigation. Democrats in both the State Legislature and in New York’s congressional delegation called on Mr. Cuomo to resign, with some saying he has lost the capacity to govern.

New York City will become the first U.S. city to require proof of vaccination for a variety of activities for workers and customers — indoor dining, gyms and movie theaters — a move intended to put pressure on people to get vaccinated, Mayor Bill de Blasio announced on Tuesday.

The rules will start on Aug. 16, and enforcement will begin in mid-September, when schools are expected to reopen and more workers could return to offices in Manhattan.

“This is a miraculous place literally full of wonders,” Mr. de Blasio said. “If you’re vaccinated, all that’s going to open up to you. But if you’re unvaccinated, unfortunately you will not be able to participate in many things.”

But some health experts suggested that the measures might not go far enough.

The vaccine requirement marks a new chapter in New York City’s fight against the coronavirus. With the spread of the more contagious Delta variant, the average number of daily cases has jumped to more than 1,300, roughly six times the number in June.

Mr. de Blasio’s announcement came a day after he declined to set an indoor mask mandate, even as more cities and at least one state did so. He has instead prioritized vaccination, requiring city workers to get vaccinated or tested and incentivizing vaccines for the public with an offer of $100 cash.

A similar mandate was issued in France last month, prompting millions of people to book vaccine appointments but also leading to huge protests.

City officials said that inspectors from the Health Department and other agencies would enforce the new rules, and that restaurants could face fines. The logistics of monitoring the city’s 25,000 restaurants and bars could be challenging — and contentious.

In the early 1960s, I was a student at the School of American Ballet, New York City Ballet’s official academy. I loved all of the company dancers, but Jacques d’Amboise was my all-out favorite. It was seeing him in Balanchine’s “Apollo” that led me to the ballet school.

Forty years later, I was working in London and saw that the National Dance Institute was offering a two-week teacher-training program in New York. Jacques had founded the institute in 1976 to give New York City schoolchildren firsthand experience with the arts.

I was aware that I was well past the usual recruitment age. A friend who knew Jacques from their early City Ballet days together wrote to him on my behalf, and I was accepted into the program.

At our first workshop, Jacques walked into the studio.

“Where is Kaye’s friend?” he shouted.

I maneuvered my way past the other dancers and stood facing him. I told him how much seeing him dance Apollo on that small City Center stage had meant to me.

He started humming a few bars of the Stravinsky score, rising to demi pointe, his arms circling his head.

He was Apollo once again.

Big Hair and Bad Luck: The Hard Times of the Troll Museum